HomeCircuit Court Hearings are Moving Along

Circuit Court Hearings are Moving Along

The various circuit courts of New Hampshire hear 90 percent of the state’s cases. The answering machine for the New Hampshire Circuit Court in Concord currently reminds people that in-person cases are expected to resume on May 5th, one day after Governor Sununu’s State of Emergency expires.

In the meantime, cases around the state are being handled in-person for essential cases and telephonically.

Suspensions of in-person court hearings at all of New Hampshire’s courts began on March 16th and were updated by Governor Sununu on March 27th. The update allows the Circuit Courts to conduct hearings in emergency cases.

Some of these cases include bail-related matters, trials and plea agreements, orders of protection for domestic violence, stalking, juvenile abuse, and requests for child-related emergency orders in divorce/parenting cases for incarcerated individuals.

According to the circuit court’s website “as many as possible” of these cases are being handled using teleconference or videoconference.

In early April, Administrative Judge of the Circuit Court, David King, said there were 21,118 hearings scheduled during the weeks covered by the supreme court orders.

“Cancelling, rescheduling or otherwise triaging this many cases is difficult and a somewhat fluid situation,” he said, “particularly when we have no idea where the state will be on May 4th.”

The New Hampshire Circuit Court, which includes District, Probate and Family Divisions, handles 90 percent of all cases filed in the state’s court system.

There are 10 Circuits in the state, one for each of the state’s counties. Within each circuit there are several circuit court locations, each of which has a clerk and deputy clerk although in some locations a single clerk may supervise several locations.

King explained that the circuit court is conducting hearings every day in emergency cases identified in the March 27th Renewed and Amended Emergency Order.

“We are doing as many as possible using teleconference or videoconference and we have also started to do some non-emergency hearings telephonically in family matters,” he said, adding that the court will be taking pleas by phone in criminal matters.

“Our priority is taking care of the true emergencies while keeping our staff safe,” he said.  “The buildings are essentially closed to the public except for very narrow reasons.  We have shut down the public kiosks in the buildings and the CSOs are screening anyone seeking entrance.”

The same suspensions of in person hearings at the state court level have been implemented on the federal level as well.

In an interview on the United States Courts website on April 8th, Clerk of Court Molly Dwyer, of the Ninth Circuit Court of Appeals, said, “We have far too many cases to have operations come to a grinding halt. Moving to remote video and audio conferencing is the best way to protect judges, employees, litigants, and the public, while also upholding our constitutional responsibilities.” 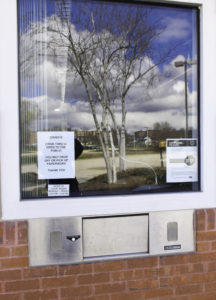 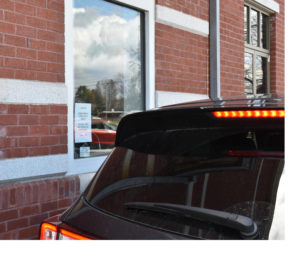 The Concord District Court on Clinton Street has been accepting court filings through a drive through window.

Theresa McCafferty, Circuit Clerk at the 6th circuit family division, said they have had a stream of people but that the drive through is “working very well.”