A Life of Creative Passions 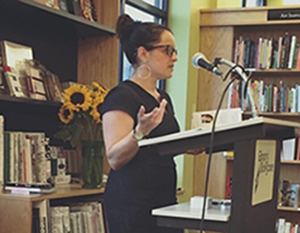 Attorney and poet Erica Bodwell has spent most of her life’s work ensuring that others never have to struggle alone, both in her practice and on the page.

She has spent half of her 30 years in practice as a healthcare lawyer involved in such cases as the one challenging the state’s cuts to Medicaid reimbursements and another advocating for adult dental Medicaid benefits in Maine and New Hampshire, both ultimately successful in helping underserved populations.

As a prize-winning poet, she writes of everything from motherhood to the dead father she never got to know to young gymnasts abused by their coaches.

“Two things inspire me to write,” she says. “One is telling the truth. And I write poems so that if another girl felt the way I did, she would feel less alone.”

Bodwell has also worked for the New Hampshire Campaign for Legal Services, which raises funds for 603 Legal Aid and New Hampshire Legal Assistance to prevent homelessness, poverty, and abuse in the state. She chaired the group for three years with the goal “to bring the corporate sector into the campaign, and we really succeeded,” she says, with more than $1 million raised.

A native of Catskill, N.Y., she attended local schools before going on to Hartwick College in Oneonta, N.Y., where she majored in biochemistry. Nearing graduation, she realized she didn’t want to go to medical school or get a Ph.D. like many of her friends, and her beloved political science teacher, Dr. John Lindell, suggested law school.

She applied to Franklin Pierce Law Center, now the University of New Hampshire Franklin Pierce School of Law, because of its reputation for excellence in intellectual property law. “That’s what you did with a science degree in law,” she explains.

But when she and her first husband moved to his native New Hampshire, she realized she would likely have to commute to a big city to practice patent law, which held no interest for her.

Instead, she spent years working part-time at several New Hampshire law firms while raising her two boys. “There are things I didn’t want to do that are maybe different from other lawyers,” she says. “I never was willing to work 80 hours a week, or weekends, or things like that. I didn’t really fit the mold of a big law firm job. … It’s always been, what does my family, my being, my soul need at this time.”

Among the firms she worked for in those early years was Backus Meyer & Branch – “where I really learned how to be a lawyer,” she says – and where she earned the admiration of Jon Meyer, who worked with her in some significant employment trials and hearings.

“I remember her legal skills, her perceptiveness and her enthusiasm,” Meyer says. “I have been impressed and envious about how she has combined a varied and successful legal career with her creative passions.”

Bodwell also founded the first paralegal program at Franklin Pierce, and taught in the school’s MBA program before deciding that, with her kids grown, she wanted to work full time.

While she was at Southern New Hampshire Health, Southern New Hampshire Medical Center was one of the lead plaintiffs in a lawsuit in which 10 hospitals sued the state over cuts to Medicaid reimbursement – an issue eventually resolved with the legislature and the Department of Revenue Administration, according to Bodwell, who calls the resolution “critical in terms of protecting that underserved population.”

While at Northeast Delta Dental, “the board and the CEO afforded me and my staff the opportunity to spend a lot of time advocating for adult dental Medicaid benefits in Maine and New Hampshire. It passed and got funded in Maine, and passed and will be funded in New Hampshire. That’s arguably for me the most important work of my legal career. … I’ve been very lucky as an in-house lawyer to be able to make a difference policy-wise.”

Bodwell now works as benefits and coverage counsel at HealthTrust, a risk pool providing healthcare coverage to New Hampshire public sector employees, retirees and their families. She lives in Concord with her husband, Andy Gray.

A self-described “literature junkie” since childhood, she started writing poetry more than 20 years ago, but got serious about it in the late 1990s after hearing poets Lucille Clifton and Maxine Kumin read and interview each other at an awards event sponsored by the Poetry Society of New Hampshire.

“I was blown away,” she remembers. “I think what got me into poetry was hearing poetry read live – the music of it, the sound of it, the way you can move words around on the page, the non-narrativeness of it.”

Bodwell’s work has appeared in PANK, HEART, APIARY and other journals and her full-length manuscript, Crown of Wild, won the Two Sylvias Press 2018 Wilder Prize and was a finalist for the 2018 Four Ways Books Larry Levis Prize. Several of her poems have been nominated for Pushcart Prizes.

Her works explore the menace, glory and heartbreak of common experiences – sex, motherhood, loss – but with an intimacy that involves the reader in their unfolding. A poem about her father, Menashe Sofer – a resettled  Iraqi Jew who died of a blood clot at 28 – imagines him fully, lighting seder candles and speaking with an accent, even though she was only nine months old when he died.

Her father was an artist, and one of his colorful, abstract works is the cover painting for Crown of Wild. Bodwell inherited his interest in the visual arts, and some of her own drawings are also featured.

Fellow poet Gail DiMaggio, who met Bodwell at a poetry writing event, calls her friend “a remarkable person, a natural leader, obviously a very fine lawyer and a first-rate poet. She’s my first reader and I’m hers. It has been a very rich and satisfying relationship.”

Bodwell, who gets up at 4:30 a.m. daily to write, is now working on a new project exploring “climate change, mothering, mothering the earth, the moon,” with a working title of “Drought Practice.”

Increasingly, she sees her poetry and her legal work informing each other. “I’m pretty committed to being authentic in all parts of my life,” she says.