HomeA Mentor in Life and Law

A Mentor in Life and Law

If you never had a chance to meet UNH Franklin Pierce School of Law Professor Marcus Hurn, read through the public Facebook page memorializing his life and you’ll likely wish you had.

Hurn, 68, died on Feb. 11, and since his death, stories of the lives he changed around Concord—at the law school, Hermanos, or Castro’s Back Room, to name a few—have been pouring in.

As someone who didn’t know Professor Hurn—just “Marcus” for most who knew him—interviewing and reading the comments of his friends and colleagues has been the next best thing. Their stories paint the picture of a colorful and unforgettable man who was intimately committed to the law and to his friends.

Hurn grew up in the Missouri Ozarks, “a culture then still showing the better traces of feudalism and anarchy,” he said, in a quote from the law school’s website.

After teaching law and practicing in Kansas City, he spent a year as a graduate fellow at Yale and then came to New Hampshire, “happily avoiding the pedantry, status obsessions and bureaucracy of the general run of law schools.”

This was 1980, and the law school, only seven years old at the time, was the Franklin Pierce Law Center. Hurn arrived in Concord that year around the same time as Professor Emerita, Ellen Musinsky, and the two became close friends.

The pair’s relationship grew out of a shared commitment to “gay and lesbian” rights, Musinsky says, despite their different philosophical and political backgrounds.

“Marcus and I were both ‘out’ and there weren’t a lot of people out in the state, especially in the legal profession in the early 1980’s. It was not an easy time to be gay or lesbian and we [along with many others] cared a lot about gay and lesbian rights,” she says. “Marcus was always very business oriented and remained that way. I hesitate to use the term in 2021 because he’ll probably come back to get me, and he wasn’t when he died, but in the 80s he was a ‘republican’ in the traditional sense. I’ve always been a liberal democrat from Massachusetts.” 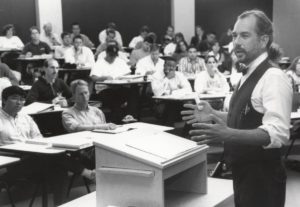 In the 1980s Musinsky and Hurn taught a course dealing with sexuality and the law titled “Civil Rights Seminar.” The reason for not referring to the course as “Sexuality and the Law,” Musinsky explained, was due to the concern some people had at that time with displaying a controversial course name on their transcript.

“We only taught it once and it was wonderful,” Musinsky says, “It was very popular and over-enrolled, but it only ran for a year.”

The school no longer offers the course but Musinsky says it was important.

“These types of courses can be really good classes because they deal with such cutting-edge issues and the discussion often leads into what’s going to potentially happen in the future,” she says. “I suspect when we taught it, we did not predict Obergefell—I did not see that coming.”

While Hurn was equally involved with business legislation in New Hampshire, some of his proudest legislative achievements, according to the law school’s website, involved his work on civil rights issues for the gay and lesbian community. He was fundamental in the formation of the Citizen’s Alliance for Gay and Lesbian Rights in the 1980s, and with the creation of Civil Unions which led to marriage for same sex couples.

Hurn was also actively involved in the passage of New Hampshire hate crimes legislation, along with Musinsky and then State Senator, Rick Trombley.

“NH had a very unique method of dealing with hate crimes,” Musinsky says. “Instead of writing the statues which could be interpreted as restricting someone’s speech rights, it focused on whether a person was [motivated by hate] and that was designed to avoid first amendment issues. That started with the three of us sitting around a dining room table having discussions and I’m sure Marcus was the author of that because he was brilliant.”

UNH Franklin Pierce School of Law Dean Megan Carpenter first spoke with Hurn before coming to the law school in the spring of 2017. That initial conversation, she says, has come to inform much of the innovation that has taken place at the school over the past several years.

“He is the first person who told me that we pride ourselves not only to teach students to think like lawyers, but also to be lawyers. And this defined so much of who Marcus was as a professor and a person.” Dean Carpenter described Hurn as deeply committed to the institution and says it will be hard to imagine the school without him. “Whether people agreed or disagreed with him, when Marcus spoke people knew he had the institution’s best interest at heart, and that’s an incredibly special quality.”

One of the things that has impressed Carpenter about Hurn is the lasting impact he had on alumni.

“I travel around and talk to alumni all the time and one of the common threads they always discuss—whether they graduated in the 80s, the 90s, the aughts, or more recently— is what it was like to have Marcus as a professor,” she says. “Just a couple of weeks ago some current students got together with an alum from the 90s; they were having a conversation over dinner—and as I understand it—the conversation was significantly about Marcus and contracts class. They were comparing notes, [decades apart], on the experience of what being Marcus’s student was like.”

One of those students was Kevin O’Shea, who had Hurn for a property law course as a first year student in the early 2000s. 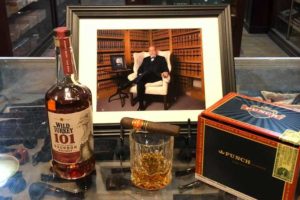 A Memorial for Professor Marcus Hurn at Castros in Concord. Courtesy Kevin O’Shea

“He used to have a poker game in the back room of Castros on Wednesday nights,” O’Shea says, adding that it was these types of informal experiences that allowed students to experience ‘Marcus on the law.’  “You learned not just about the class you were taking but also about his perspective on the law, which was unique and encyclopedic.”

O’Shea credits Hurn’s ‘conflicts’ course as forming the type of lawyer he became, echoing what Dean Carpenter referred to as his ability to teach students how to be a lawyer rather than merely think like one.

“Unlike many doctrinal and Socratic method classes, one of the first questions he’d always ask was ‘who are the parties and what do they want?’ It was a different perspective, very pragmatic and practical. Marcus gave his life for that school and he was always there for those who needed him.”

Chris Somma was 24 when he started law school in Concord and he was one of those people who needed Hurn’s support early on. In his first year, Somma says he was one of two openly gay students in the class. This was 2003, before marriage equality, and he was having difficulty living in New Hampshire.

“Moving to Concord was a huge issue for me,” Somma says. “I grew up in Portland, Maine, in a first-generation Italian American family and moved away to Washington D.C. because of the difficulties I was having with them.”

He reached out to “Marcus” that first semester. Somma says he always referred to his professors in law school as Professor, “except Ellen and Marcus, who were just ‘Ellen’ and ‘Marcus.’”

Hurn took Somma out to dinner following their introduction and Somma explained his difficulties.

“I told him about my family and my background,” Somma says, pausing emotionally to remember that time in his life. “I was so young and he made me feel really comfortable. He told me that he saw a lot of potential in me. He said that if I allowed him to be part of my life he would help. I asked him why he would do that, and he said because he cares about gay students. He knew it wasn’t easy, especially living in New Hampshire.” 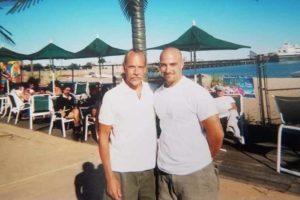 Hurn eventually introduced Somma to Provincetown, Massachusetts, where he owned a home, and Somma says he fell in love with it. Today, he is a practicing attorney who splits his time between offices in Durham, NH, Boston and Provincetown.

“I fell in love with Provincetown. I said, ‘my god, this place is magical. It’s like the gay Disney land.’”

During Somma’s third year he introduced his boyfriend, who would become his husband in 2010, to Hurn.

“I was still having a lot of problems with my family and needed someone to walk me down the aisle. I asked Marcus to do it and even to this day he would always talk about that day as one of the best honors he had,” Somma says.

While he has reconciled many of the differences with his family, Somma wishes he could be making plans to see Hurn this summer at the pool in Provincetown.

“He took care of me when no one else did and that’s what hurts the most,” he says.  “He’s not there anymore. It hurts for a lot of people.”

Richard Fogal started law school in Concord in 2009. He had just come out when he arrived in Concord and his need for Hurn’s comfort and assurance was similar to Chris’s experience.

Fogal says he didn’t take classes with Marcus until the end of law school.

“For most of my time at UNH I just knew him as a dear friend. I was one of the privileged people who were able to spend time with him in Provincetown over the summers and in Ogunquit, Maine. I’m having a hard time….I owe him a lot. He mentored me both in life and in law.”

Musinsky describes Hurn as an introverted person who may have appeared standoffish and gruff on first encounters. But, she says, “he was as caring as a person can be.

For law student Luke Hertzel, class of 2023,  those first impressions of gruffness that Musinsky cited, quickly gave way to an openness and curiosity about the young law student.

“I had only met him during Contracts lectures and thought he was going to be too demanding of our class,” Hertzel says. “I was completely wrong about those expectations. In my second week, I was able to meet with Professor Hurn one-on-one. We sat in his office for over an hour, speaking nothing of Contract law. Professor Hurn asked all about me: where I was from, did I have a particular heritage, what made me choose UNH Law, and more. His compassion was the only thing that exceeded his knowledge of the law. We all miss Professor Hurn.”

For Musinsky, it is not easy saying goodbye.

“He could see something good in everyone who came to the school and he was a very good teacher,” she says. “Marcus and I—sometimes I’d say we were good friends—sometimes I think about him as a brother. We were very close.”