A Smooth Election 2020 in the Granite State 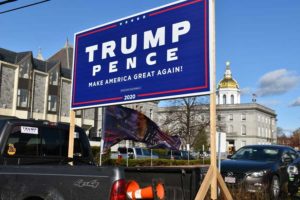 3. A pick-up truck displaying support of President Trump on Green Street in Concord.

While record numbers of ballots were cast in New Hampshire’s general election, the consensus amongst officials is that it was a success.

Deputy Secretary of State David Scanlan, whose office oversees elections, said there were no significant problems this year.

“Given the political climate and the pandemic, the election went very smoothly,” Scanlan said.

Scanlan attributes part of the success for this year’s general election to a commitment on the part of election officials to planning across the state, which included individual Zoom video meetings with town and city moderators, officials, and supervisors of the checklist, prior to the election.

Prior to March this year Scanlan said he’d never heard of Zoom but that now he’s gotten to know it “very well.” 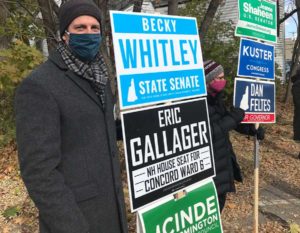 Steven Whitley holding a sign supporting his wife Becky Whitely who was successful in her bid for state the state senate.

“These meetings opened up a tremendous channel of communication allowing us to talk about what the issues were,” he said. “Election officials communicated their concerns so that by the time we got to election day the questions people had were more procedural than anything else.”

The Secretary of State’s office was involved in several routine recounts the week of Nov. 9, but Scanlan said this is typical.

Planning for holding a vote during the COVID-19 pandemic began last April with Secretary of State William Gardner’s creation of the Select Committee on 2020 Emergency Election Support. The committee’s task was to ensure that every person who chose to vote, or work at the polls, would be able to do so despite any obstacles.

Bradford E. Cook, the current Ballot Law Commission chair in New Hampshire, served as chair for the Secretary of State’s select committee. Cook, who was counsel to the Republican State Committee in the 1970s and a campaign manager for former U.S. Senator Warren Rudman, has years of experience in non-profit law, planning and probate, and government relations.

“This committee was dealing with how we were going to vote during a pandemic,” Cook said. “We started out with an assignment to advise Secretary of State Gardner’s office on how to spend the federal money that came for this purpose as part of the CARES Act and we had to examine all parts of the voting process.”

Cook explained the planning process was all done through Zoom calls and like Scanlan, he was impressed with the high level of engagement by officials around the state.

“What impressed me the most was the total dedication of election officials. We had as many as 470 people on these calls at times and they were all engaged,” Cook said. “In the planning process people started thinking about how they were going to do it in their individual towns and the creativity about how people were going to vote by absentee ballot was tremendously impressive.”

One major concern during the meetings, according to Cook, was that the fear of COVID-19 would suppress the vote, making it unrepresentative.

“We wanted to make sure that everyone who wanted to vote could vote and we met for two months in the spring and put out a report on how people could vote safely,” he said. “In terms of process it was an outstanding election in New Hampshire.”

While there are always glitches during an election, Cook said, mentioning as an example the failure of voting machine software in Londonderry that was solved by the end of the day, the biggest concern this year was the high number of absentee ballots because of a legislative change that allowed “no excuse” absentee voting amid the pandemic. Still, all ballots were counted by election night.

“New Hampshire elections went as perfectly as usual and as smoothly as usual under the watchful eye of Secretary Gardner, who is a steady hand at the tiller,” Cook said. “It was incredible.”

And in New Hampshire he said he finds the political aspect of this year’s election fascinating.

He attributes this to the voters in New Hampshire invoking a referendum on the president, and the experience of Jeanne Shaheen in the Senate, and Chris Pappas and Annie Kuster in the House.

But at the state level he said it comes down to people voting on the coattails of Governor Chris Sununu, who many support as doing a good job.

“When a president who is in power is not reelected it’s a referendum on the president and I think that was probably the key to the top of the ticket,” Cook said. “President-elect Biden is an outstanding man. I’ve had some personal experiences with him and I think he’s what this country needs but I don’t think that’s why he got elected. I think it was a [referendum] on Donald Trump.”

“What you see happening south of there is that I think Gov. Sununu had pretty long coattails and people said, ‘Well if we like the governor so much we want to support him.’”

The U.S. election system is run state by state and community by community. What we’re going to see on a national level, according to Cook, are recounts in some states and a certification process that will be completed by Dec. 8. The electoral college votes on Dec. 14.

“Typically in recounts very few votes get changed. Recounts don’t result in major changes because the process is so mechanized,” he said.  “After recounts each state certifies results. And after this if the candidate feels there was an error of law, in the process, they can appeal. But there has to be some specific basis to an appeal. You don’t appeal an election directly to the Supreme Court. The Trump people have brought a lot of legal action so far that hasn’t amounted to much.”

According to Scanlan the only voting issues this year in New Hampshire were common ones. The next steps, he said, will be to finish the few recounts his office is doing and to submit any appeals to the Ballot Law Commission.

Once the official numbers are in, he said, letters are then sent to the legislators who won calling them to take their seats on organization day, which is the first Wednesday in December.

“There’s not too much of a story and that’s the way we like it,” he said. “New Hampshire has good elections with very few issues typically and it comes as a big relief that this was no different than years past.”