Edward Alkalay is in his element standing before a crowd — whether in a courtroom, a classroom or on a performance stage.

The Albany, New Hampshire resident is a co-founding member of Conway-based Alkalay & Smillie, but also an experienced educator and a folk/country musician with two CDs to his credit.

After growing up in Ardsley, New York, and getting a bachelor’s degree from the State University of New York at Albany, Alkalay came to Boston to pursue a musical career. He spent a couple of years as a street performer, playing acoustic “Americana music” and writing many of his own songs.

But the need for a steady income found him considering a different career path, and he was torn between the law and teaching.

With the law, he says, “There’s a performance aspect to it. The same with teaching.”

He ended up doing both.

Alkalay got his Juris Doctor from the University of Connecticut School of Law, and went on to work as a prosecutor and assistant corporation counsel in New York City for four years before becoming a federal law clerk. For five years, he was an assistant United States attorney at the Department of Justice in Washington, D.C., handling a load of more than 70 cases.

Twelve years ago, he started his present law firm, with his practice focusing on civil litigation, employment law, personal injury law and criminal defense, and was soon joined by Pamela Smillie, with whom he had worked at another law office for three years.

“Ed handles the litigation side and I take care of transactional matters,” Smillie explains. “It has been a pleasure working with Ed. Ed is funny, compassionate, smart, practical and supportive.  Plus, he brings his dogs to work!”

Inside the Office: Canine “Assistants” & His Guitar

Alakalay frequently works with those two unusual “assistants” at his side — Gus, a 9-year-old black lab, and Feather, a yellow lab puppy that he and his family are fostering while she learns to 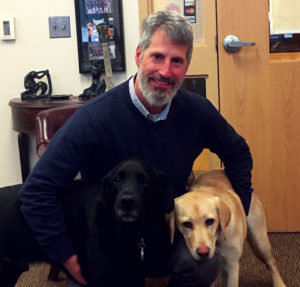 “I will say that I think having dogs in the office has really helped when clients come in because often they come in extremely stressed out,” he says. “I ask them beforehand if they’re OK meeting with a dog. Most of the time it decreases the stress they’re feeling and enables them to better explain the situation in a logical manner so I can better understand and work to help them.”

In addition to civil litigation, Alkalay also works as a mediator to help resolve court cases and disputes between opposing parties.

“Gus and Feather have often played very helpful roles in easing the anxiety associated with the mediation process,” he says. “For example, prior to a recent case that I mediated, the litigants were filled with tension toward one another and the court process in general. But when they came to my office and met Gus and Feather, it had a very soothing effect on them. It changed the dynamic of the mediation and we were able to move forward, discuss the issues reasonably and satisfactorily resolve the case.”

Among his most gratifying cases is a recent one in which he represented a man in his 60s with a disabled wife and two special needs grandchildren, all living in an uninhabitable house owned by an unresponsive landlord. The client had continued to make improvements to the place, and to pay his rent — despite problems with heating, water supply and roofing.

“They were able to upgrade to a much nicer place,” Alkalay says, “and are actually looking to buy a place. He has never owned a house in his life.”

Another unusual item seen in Alkalay’s office is a guitar, which he often plays during breaks.

“Clients are interested in coming to you to solve their legal issues but I think they’re also interested in who their lawyer is,” he says. “When they see I have dogs in the office and that I’m a musician, one of those is almost always a conversation starter.”

Alkalay’s two CDs — the rootsy Turning Dorian Gray and a more rock-like I Hate You — both feature his strong vocals and impressive guitar, banjo and fiddle instrumentation.

In addition to his legal work, Alkalay teaches courses on legal research and writing at Granite State College. And, he recently joined the board of Assistance Canine Training Services, or A.C.T.S., the only New Hampshire-based assistance dog program accredited by Assistance Dogs International. The organization places select puppies with foster families for two years, while the dogs are trained by both staff and volunteers to be service or therapy animals

Alkalay was so impressed with the group’s work that, with the enthusiastic support of his wife and children, he offered to have the family become volunteer puppy raisers for Feather.

“Puppy raisers give of themselves in the most amazing way,” she adds. “They bring a young puppy into their homes and raise and train it for up to two years.  When their two years is up, the puppies return for final training and are placed as service or facility dogs. Ed has embraced the process and attends weekly practice and training sessions and takes his puppy, Feather, to work daily and out on socialization field trips regularly. His entire family is involved.”

Alkalay acknowledges it will be difficult to give up Feather at the end of the two years, but says, “There is going to be some organization or person on the other end that is going to need a service dog. I’ll be very sad but I’ll also be proud.”

Among his other volunteer activities, Alkalay is town moderator in his town of Albany and coaches basketball, softball and baseball on the teams of his three children, ages 16, 14 and 8.

He also works frequently with the Conway Parks & Recreation Department, whose director, John Eastman, calls Alkalay “one of the finest men I know.”

“He currently coaches boys’ basketball for my program but has been involved in youth sports for more than 10 years,” Eastman says. “Ed is the model of a coach that I use as a standard for good coaching.

“He isn’t just about the strategy of the game, he is there to mentor young kids about sportsmanship and fair play. Ed loves to win as much as any coach I have but Ed’s kindness, understanding, hard work and dedication is what sets him apart from others.”