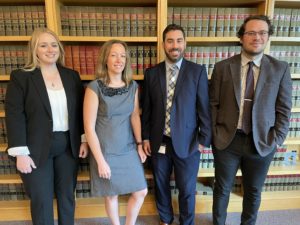 Sometimes we know what we want, but we don’t know how we want it. Law school students or recent law school graduates may know they want to be lawyers, but not necessarily where they want to focus their practice. There are several paths a new lawyer can take to figure it out but becoming a law clerk is one of the more beneficial ones. Clerkship offers practical experience in the nuts and bolts of the New Hampshire legal system that can help you focus your eventual practice area and begin building your network.

Law clerks (also known as judicial clerks) are lawyers who provide direct support and counsel to a judge or justice. They are primarily responsible for debriefing cases and trial records, researching the applicable law, preparing questions for oral arguments, and drafting legal memoranda and court opinions.

One of the main benefits of a clerkship is learning how the court works – what judges and juries look at and how they make decisions in cases. According to Paralegaledu.org, an astute law clerk will pick up more in a year of clerking than they did during their entire time in law school.

It’s also an excellent chance for new lawyers to bolster their network within the legal community. In every clerkship, daily interaction with lawyers, judges, and other officials with business before the court provides networking prospects in their jurisdiction. Observing many attorneys in practice each day also exposes clerks to a wide range of legal styles and may provide acumen into legal organizations that can inform decisions about future permanent employment. 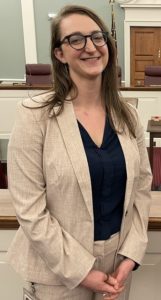 “It’s a great first job because it gives you a front-row seat to the legal process and litigation without having too much skin in the game,” NH Supreme Court Senior Law Clerk, Alexandra Schmitt, says. “It’s an opportunity to observe and learn without having to be the person litigating the case. It allows you to gain insight into how the courts work and it gives you an opportunity no other attorney gets to have – having that conversation with a judge after a hearing or argument. Going from being a law clerk to the other side of the bench, you come out with a lot more confidence.”

Schmitt also says it’s a great opportunity for new attorneys to create relationships with judges. “It gives you that first-person access to a judge, that you can learn from and have a mentoring relationship with, that’s invaluable. Going from being a law clerk to the other side of the bench, you come out with a lot more confidence.”

Stephani Roundy Knights, a Law Clerk Supervisor for Rockingham Superior Court, loves her job. She clerked straight out of law school in 2008, then after practicing in a firm for a while, she returned to clerking in 2016 when the newly created supervisory position became available. Like Alexandra Schmitt, her supervisory law clerk job is a permanent position.

“Law clerking is a great training opportunity for new lawyers at any level. For new lawyers who may not know what area they want to practice in long term, they can dabble,” Roundy Knights says. “Or even if you do know, it’s an opportunity to become familiar with the judges and the process on the other side when representing clients. It can set you up for success and help you get a leg up in your practice.”

Anecdotally, when Roundy Knights was encouraged to apply for the new Law Clerk Supervisor position, she was 35 weeks pregnant. She gave birth just two days before the interview and kept telling the nurses in the hospital to make sure she’s ready to go home on Wednesday for her interview. “That’s how badly I wanted the job,” she lightheartedly said. “I pulled myself out of the hospital for it.”

In addition to the benefits of learning the inner workings of the court, the mentorship and relationship with judges, and the networking opportunities with lawyers from all over the state, clerking also provides the opportunity to exponentially hone your writing skills.

“I considered myself a strong writer when I graduated from law school, but from there it astronomically improved,” NH Supreme Court Junior Law Clerk Ali Gennaro said. “Everyone who clerks comes out the other side as an excellent writer, which is an extremely important part of legal practice in any area of the law.”

For Gennaro, a recent graduate of Northeastern University in Boston, clerking at the Court has been helpful in giving her exposure to the NH legal system. “It’s great for someone like me – who wanted to work in NH but was in law school in Boston – to have the opportunity to get to know the full legal landscape of the state I intend to work in before having to decide where I’m going to go.”

Stephani Roundy Knights agreed with Gennaro saying, “a law clerk needs to capture the judge’s voice in all respects. It’s the judge’s work products – we are just facilitating and streamlining the judge’s consideration of the case.”

Most judges will actively encourage their clerks to engage in debate over the merits and arguments of cases that come before their court, shaping their perspective through dialogue. According to Alexandra Schmitt, the law clerk’s job is to ensure that the judge makes the most informed decision possible.

“Sometimes this means having to tell the judge something they don’t want to hear – such as the existence of case law contrary to the judge’s initial thoughts about a case,” Schmitt says. “A law clerk may, at times, disagree with the judge’s final decision but must still implement what the judge decides. In short, being a law clerk requires the ability to communicate and disagree with civility.”

Law school students are encouraged to apply early, even during their second year. They can talk with their career counselor to get started and they can even begin interning at one of the courts while still in school. Recent law school graduates can check with Alumni Services or go directly to the job postings on the court websites.