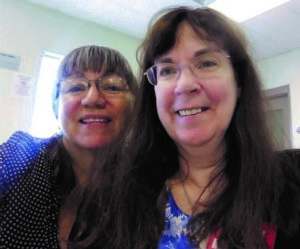 Attorney Susanne Gilliam, right, spent a week in July volunteering in Texas and is pictured here with her translator, Rosa Marie. (Courtesy photo

For attorney Susanne Gilliam, a spur-of-the-moment trip to Texas wasn’t your average summer vacation — it was life-changing.

Gilliam was volunteering with the Immigration Justice Campaign to help families detained and separated at the U.S.-Mexico border, many of whom are seeking asylum. She spent a week in El Paso just as the government faced a court-ordered deadline to reunite families on July 26.

“[I]n the 61 years of my life, I can tell you that the only equally significant event was the birth of my first child,” she says of her service.

Gilliam, who has a solo practice of elder law and mediation in Sudbury, Massachusetts, called Gilliam Legal, had no prior experience in immigration law and graduated from law school three years ago.