HomeCanine Companions in the Courtroom

Canine Companions in the Courtroom 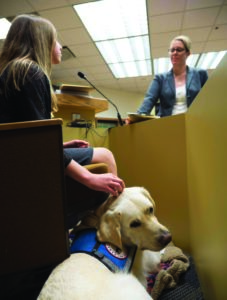 Testifying in court is an unfamiliar process for most people and can be quite stressful, especially for a child. Having to recall traumatic events during that testimony can exponentially magnify that stress, sometimes causing the phenomenon called re-traumatization. In the last 17 years, courts and child advocacy centers across the U.S. have started to recognize the benefits of support that can be provided to children by trained facility dogs.

Presently, 26 states have developed programs where judicial systems partner with facility dogs to support crime victims. 16 of those states have laws that allow the use of man’s best friend in legal proceedings, eight of which have legislation permitting their use to assist witnesses giving testimony in court.

New Hampshire does not currently have any laws regarding the usage of canines in the courtroom and the discussions have been tabled due to the Covid-19 pandemic. However, a national bill, the Courtroom Dogs Act, was recently passed in the Senate. The bill, introduced by U.S. Senators John Cornyn (R-TX) and Dianne Feinstein (D-CA), clarifies federal judges’ authority to allow certified facility dogs in courtrooms during legal proceedings and would require the Department of Justice to issue guidelines for consistent practice when using them in court.

Facility dogs are assistance dogs, like guide dogs or emotional support dogs, that are specifically trained to work alongside professionals to assist others, such as child victims.

According to Courthouse Dogs Foundation, “a facility dog should be a graduate from a nonprofit assistance dog school which is accredited by Assistance Dogs International.” They typically receive around two years of training before being placed with a professional handler. They can also work with multiple handlers, on or off leash, which provides much-needed flexibility when present in private forensic interviews, medical exams, and courtroom hearings.

Their training includes obedience and resiliency to stress, so as not to be disruptive or distracted by strange noises while performing their duties. They are not protective, and they lack the prey drive of some breeds commonly distracted by fast-moving curiosities like squirrels or cats.

When being placed to work in the legal system, facility dogs undergo additional screening to ensure they are affectionate and comfortable having close physical contact with children. The dog should not be distressed by a child’s sudden pull of its tail or unwitting finger in its ear.

In addition to the courthouse, facility dogs work in child advocacy centers and city or county attorney offices. Their handlers are professionals who work in the legal system due to the confidential nature of certain proceedings. When not at work, a facility dog is a loving pet to one of their primary handlers.

Courthouse Dogs Foundation, a non-profit organization founded in 2012 by former Seattle prosecutor, Ellen O’Neill Stephens, is perhaps the biggest proponent of the placement and usage of facility dogs. The organization has helped several states with drafting legislation and believe that pooches in the courtroom should be a mainstream practice.

In 2003, during her tenure as a prosecutor, O’Neill-Stephens brought her son’s service pup, Jeeter, to accompany twin seven-year-old sexual assault victims into King County Superior Court in Seattle to comfort them during testimony against their abusive father. The next year, she worked with Canine Companions for Independence to become the first assistance dog organization in the world to place a trained facility dog, Ellie, to work in a prosecutor’s office.

“When under a lot of stress, direct and cross-examination can make a child re-experience their trauma,” O’Neill-Stephens said. “The usage of facility dogs helps combat that and enhances the fact-finding process.”

Celeste Walsen, Executive Director of Courthouse Dogs Foundation and veterinarian, supports that assertion, saying that “having a dog makes all the difference in the world in keeping witnesses in the right frame of mind to give meaningful testimony.”

Walsen, who also holds a BA in Psychology from the University of California Berkeley, says that dogs impact the neurophysiology of humans. “To a vulnerable individual such as a child, the presence of police officers, lawyers, jurors, and a person in a big black robe looking down on them can be very scary,” Walsen said. “And when we are struck with fear or anxiety, one of the first things you lose is the ability to talk. But the calming effect of a dog can help raise oxytocin and lower cortisol levels, affecting the neurotransmitters in the brain, to allow the witness to keep talking. This limits re-traumatization and gets the best evidence.”

According to Walsen and O’Neill-Stephens, the best breeds for facility dogs are Labradors, Golden Retrievers, or a combination thereof.

Despite the lack of laws in NH, there is one prosecutor’s office in the state that occasionally uses a facility dog: Carroll County Attorney’s Office.

“The experience has been really helpful,” County Attorney Michaela Andruzzi said. “It gives them something to focus on instead of having to look me in the face.”

Westin, the Carroll County facility dog, is primarily located at the Child Advocacy Center of Carroll County. His handler (AKA “Westin’s Mom”), Executive Director Elizabeth Kelley-Scott, said he greets families as they come into the center and helps calm the anxieties of both the parents and the children. He was trained in 2013 by Assistance Canine Training Services and is set to retire soon.

“Westin is worth his weight in gold,” Kelley-Scott said. Recalling an instance where Westin helped a child victim with attention deficit and oppositional defiant disorders open up to her in a forensic interview, she recounted, “I didn’t think he would talk to me, but we ended up talking for 30 minutes.”

Concord City Prosecutor Tracy Connolly has been involved in a few cases where a victim would bring a dog for comfort, but not while testifying. “If it helps a victim get through their testimony, I’m all for it,” she maintained.

Amanda Grady-Sexton, Director of Public Affairs for New Hampshire Coalition Against Domestic and Sexual Violence, said she feels that the imbalance of the interests of crime victims against the rights of the accused in New Hampshire’s justice system regularly results in re-traumatization. She said that “if the goal of a criminal trial is to seek truth and determine the accused’s innocence or guilt, the New Hampshire legislature should support evidence-based efforts that help victims and witnesses provide clear and coherent testimony, including the use of a discreet service animal in the courtroom.”

Conversely, some criminal defense attorneys have concerns with a canine presence in the witness stand.

“I would be concerned that it could bolster the credibility of the witness and render them sympathetic to the jury,” Attorney George “Skip” Campbell said. “I would have no problem with the use of one during recess when the jury can’t see them, though.”

Attorney Sandra Bloomenthal expressed similar concerns saying, “I’m a dog lover, but I feel that the jury seeing a dog in the witness box may elicit unwarranted sympathy.”

Interestingly, Attorney Ted Lothstein has a different take on it. He has had direct experience with the usage of man’s best friend in court when he represented a defendant in a domestic violence case. He said the plaintiff, with no apparent mental or physical disabilities, brought a huge hound with her into the courtroom and neither she nor the prosecution gave any explanation.

“The jury found in favor of the defendant,” Lothstein says. “It was like the proverbial elephant in the room, but in this case, it was a very large dog. The lack of explanation was damaging to the prosecution’s case.”

Some defense attorneys in other states have included objections to facility dogs in their appeals, but to no avail.

In the Pennsylvania Supreme Court case, Commonwealth of Pennsylvania v. Sheron Jalen Purnell, the Court opined, “there is nothing in the record to suggest that the comfort dog was in any way disruptive to the trial.”

Likewise, in Andre Montez Jones v. Georgia, Jones asserted that the trail court erred in allowing a facility dog to accompany one of the plaintiffs, that it prejudiced his defense by generating sympathy in the jury. The Georgia Court of Appeals answered this by saying, “given the procedures the trial court followed to minimize the dog’s presence, we cannot assume that the dog had any impact on the jurors, much less that it engendered sympathy in them.”

To minimize potential prejudice against defendants, Courthouse Dogs Foundation recommends that facility dogs be brought in and out of the courtroom while the jury is not present and that the dog remain out of sight under the witness box. It is also recommended the judge inform the jury of the dog’s presence (but to convey that it is in no way to be interpreted as reflecting on the truthfulness of the testimony) and that the dog be made available to witnesses on both sides.

It is unclear if or when the Courtroom Dogs Act will pass, or if NH will pass a law any time soon surrounding the usage of facility dogs, but anything is paws-ible.