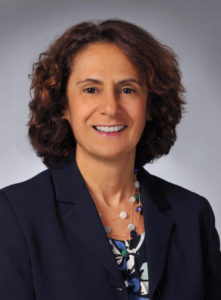 Charla Bizios Stevens has been a trailblazer since the fifth grade, when she rebelled against the regulation that girls had to wear skirts to classes in her Haverhill, Massachusetts elementary school.

One day after gym class, when her female classmates still had on their athletic pants, she marshalled them to their next class without changing, proclaiming “If the boys can wear pants to class, the girls should be able to, too, because it’s so darn cold out.”

Though she did not prevail – the principal threatened to send them all home – her sense of righteous indignation and empowerment only grew. By the time she was 13, she was knocking on doors on behalf of Democratic presidential candidate, George McGovern, asking skeptical voters what they thought about the issues.

“I think I was always interested in legal issues, constitutional issues, individual civil rights,” says Stevens, now a director and shareholder at Manchester-based McLane Middleton. ‘I always knew I would go to law school from the time I was fairly young.”

She has also been a literal trailblazer, hiking the wilds of the nation’s national parks and participating in numerous marathons, including the recent New York City Marathon, where she raised more than $6,100 for Children’s Hospital in Boston.

After graduation, she worked at three small law firms in New Hampshire before joining McLane Middleton some 20 years ago. Her focus is employment law, education law and health care practice, and she has extensive experience helping employers address issues of discrimination, harassment and wage and hour claims.

“What I most love doing are trainings for employees and management groups to get people to talk to each other and see things in a different way,” she says. “When people actually talk to each other and get from their coworkers a real-life summary of why something causes them pain or strikes a chord, you might not understand that if you haven’t walked a mile in their shoes.”

Stevens also has a reputation for advising employers to “do the right thing” regardless of whether they are required to by the law, and to not require that a victim of sexual harassment be required to stay silent as part of a settlement.

Unless victims are allowed to speak out, she points out, there is no way of knowing how many others have been victimized. “They leave people behind them and the problems were never fixed,” she says. “I do talk to clients about not having that confidentiality in the right situation, in a clear case. I think speaking up is also part of the healing for a lot of people who are victimized.”

Stevens’s work has won her the admiration of colleagues like McLane Middleton attorney Susan E. Schorr, who has worked with her as an education and employment lawyer for some five years.

“I value her smart and practical approach to the complicated situations we help clients navigate every day,” Schorr says. “Charla asks the right questions that guide us to the right answers. She has maintained an important focus on our self-care in a demanding profession. Plus, that infectious laugh and wicked sense of humor!”

Stevens has also been something of a pioneer on the athletic front, running track in high school before her school had girls’ teams. “It was right on the cusp of Title IX and we had to run on the boys’ J.V. (junior varsity) team,” she recalls, “and our uniforms were not girls’ uniforms.”

Nevertheless, she adds, “I loved it.” 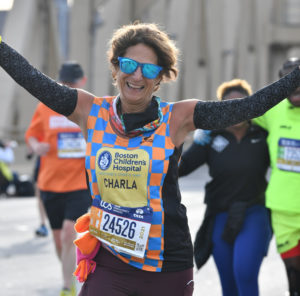 Stevens took up marathon running 12 years ago, at the age of 50, and has completed 11 events, including the recent New York City Marathon, which she finished close to her personal best of four hours and 37 minutes. “I’m pretty happy I can still do it at this age,” she says. “What I lack in speed I make up for in enthusiasm.”

Fellow runner Christy Balch met Stevens two years ago through another running friend, and last summer traveled with Stevens and two other runners to the west coast. “It was an epic, whirlwind, 10-day trip to some of the most spectacular sights this country has to offer,” she says.                                          “We hiked the Utah national parks and the Grand Canyon, all planned by Charla.”

“I admire her timeless sense of self, organization, her determination and just how strong she is both mentally and physically,” Balch adds. “She is one of the kindest people I have ever met. I always say I want to be like her when I grow up.”

Another runner friend, Shannon Beaumont, met Stevens on a 12-mile group run five years ago and describes her as “generous, fun, easygoing, and just a joy to be around.”

“I don’t know her in a professional setting,” Beaumont adds, “but she has incredibly strong convictions and an unshakeable moral compass.”

A Bedford resident, Stevens also hikes in the White Mountains, near the North Woodstock getaway she owns with her husband, David Stevens.

She says her athletic endeavors contribute to her ability to do her job. “In terms of mental health and physical health, it just gives you energy to keep going, grounds you, stabilizes you,” she says. “I think there’s a certain amount of dedication or stick-to-it-iveness you get that translates into whatever your job is.”

“I love being busy and I love doing things that matter,” she says. “Also, I have a hard time saying no.”

Stevens also likes to reach out to other women lawyers finding their way in a profession that “is still male-dominated in terms of leadership and you’re still bearing the lion’s share of the home responsibilities.”

“The most important thing I can say is, always strive to be authentic,” she says. “If you’re not, that’s a big burden to carry. So many women struggle with imposter syndrome. You have to find things that bring you joy and do that.”