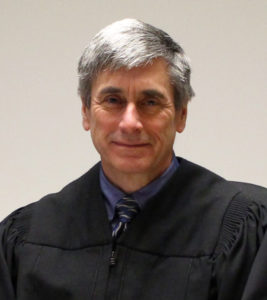 I still like to think of myself as a younger member of the Bar. Yet, as I write this, all of the Circuit Court judges who were appointed before me have retired—and my wife is quick to remind me that I can’t really call myself a “kid from Colebrook” anymore. In what feels like a relatively short career, I have been fortunate to play a role in the two significant structural changes in the New Hampshire trial courts, and to be witness to many other impactful changes.

When I was in law school in the early `80s, the trial courts were funded and supervised at the county and local level.  Counties were responsible for funding and managing the Superior and Probate Courts. The District and Municipal Courts were part of town government (district courts had been created in 1963 to replace municipal courts, as they were abolished over time). The 1983 Red Book listed 138 judicial positions: 5 Supreme, 10 Probate, 16 Superior, 87 District, and 20 Municipal. At that time there were 42 District Courts and 15 Municipal Courts around the state.

Following recommendations of a legislatively-created Study Commission, House Bill 200 was introduced in the 1983 legislative session to create a unified court system funded by the state. The bill was sponsored by Representative Donna Sytek, Chair of the House Judiciary Committee. I had the privilege of serving as a State Representative on the House Judiciary Committee that session, and fortuitously had a front-row seat to the debate and ultimate passage of this significant piece of legislation.  Supreme Court Justice Chuck Douglas testified in our committee on behalf of the Judicial Branch. The NHBA’s support of the bill was presented by Bar President Dick Galway. HB 200 passed with an overwhelming majority vote, creating the unified court system, to be funded with its own budget.

Over the next several years, the municipal courts—created in 1915—closed as the last judges, often non-lawyers, retired.  I have fond memories of appearing in front of Judge Ralph Rowden in the Northumberland Municipal Court.  Judge Rowden worked at the Groveton Paper Mill and walked across the parking lot to the town library to hold court when the end-of-shift whistle blew.  As the municipal courts closed, towns left without a home court lobbied the legislature for a District Court.

I joined the Probate bench in February 1990. All probate judges were parttime and maintained law practices, as did the majority of district court judges. The district court judges practiced in the probate court and vice versa. As my practice was primarily criminal defense, I regularly appeared in front of the six district court judges in Coos County. At that time, it was common for us to try civil cases in Superior Court against each other. The County Attorney was also part-time and had an active probate practice.

Fast forward to 2010, the Probate Court remained unchanged, with 10 judges presiding in each of the county seats. The last municipal court (Greenville) had closed its doors in 2000, and district courts had been consolidated into 31 locations. Many new District Court facilities had been constructed, moving courts out of town halls, libraries, police stations, and even a Legion Hall (where it had once been in Colebrook). The Family Division, which began as a two-county pilot project in 1996, was still being rolled out, assuming its jurisdiction from the other three trial courts. The Judicial Branch was under significant pressure from Governor Lynch to tighten our belts, which prompted Chief Justice Broderick to create the “Innovation Commission” in March of that year.  The concept of trial court consolidation quickly became the focus. When the concept of one trial court did not gain traction, the decision was made to combine the limited jurisdiction courts (district, probate and family) into one court.

The concept was simple: collapse redundant management structures and certify judges to hear all cases. A small team spent the fall of 2010 designing the new structure and drafting the enabling legislation. We chose the moniker “Circuit Court” because, as I said at the time, “Supreme Court” had already been taken. In January 2011, House Bill 609 was introduced with bipartisan support and signed into law with lightning speed by Governor Lynch on May 16, 2011. Legislative leadership adopted our proposal to collapse management positions from 118 clerks and deputies to 52, but did not approve of our plan to accomplish the reductions by attrition over 10 years. Instead, we were forced to make the cuts effective July 1, 2011. We posted the 52 new positions in March and invited the 118 clerks and deputies to apply. It was a painful process, as many jobs were lost. The new Circuit Court began operations on July 1, 2011, with 18 clerks (reduced from 52), supervising staff in 35 courthouses around the state.

We continued our pledge to the Legislature to be innovative, created a call center, now known as the Information Center, which has taken 4.4 million calls in ten years, and pioneered e-filing in 2012, with a strong focus on self-represented parties. In 2020, with the closing of the Plaistow Court, we finally completed the 16-year rollout of the Family Division, which is now found in every location where there is a District Division. Since its inception, the Circuit Court has managed more than 1.3 million new cases, as well as tens of thousands of reopened cases.

While the changes in 1983 were significant for court funding and supervision, the creation of the Circuit Court in 2011 was a much more significant structural change. This restructuring, together with the many innovative changes that the circuit court has initiated, has saved the taxpayers of New Hampshire over $60 million dollars in our first 10 years of operation. In retrospect, some of the cuts we made were too deep. We will continue to advocate for appropriate resources in the coming budget cycles, while also continuing to seek new and innovative ways to provide access to justice for the vast majority of litigants who come to court in the Granite State.