The Judicial Branch initiative to increase digital access to the court system celebrated several milestones recently. As of September 4, the Trial Court Information center had answered 3 million calls since it was established in 2012. And, with Superior Court civil filings and Supreme Court appeals made electronic in the last two months, the end of the project is in sight.

“The implementation of e-filing at the Supreme Court is part of an overall plan to transform the way that New Hampshire courts do business,” Chief Justice Robert J. Lynn said in a press release. “For more than 100 years, appeals have been filed on paper here at the Supreme Court.

“Our new system of electronic filing will be more convenient for filers, and will make the court’s internal processes more efficient because we will no longer be handling cumbersome stacks of paper … The development of our electronic system took significant planning and work, and I want to thank everyone involved in the project for their hard work and commitment to the project.”

According to the Judicial Branch, although self-represented litigants cannot file electronically at the Supreme Court at this time, they are now required to submit only a single copy of their filing to the court. Kiosks are available in the Supreme Court lobby for filers who need assistance and wish to file from the court. Members of the public will also be able to review case records from the kiosks.

Civil filings in the Superior Court are the fourth case type to be brought online by the New Hampshire e-Court program since its inception in 2012, following small claims, guardianships and estates. Superior Court Chief Justice Tina L. Nadeau led the switch away from paper.

“We’ve found that electronic filing provides huge benefits for lawyers, self-represented parties and the court system,” Nadeau said in a press release. “It starts with all of the time saved by being able to file from an office or a home computer, which means fewer trips to the courthouse, and ends with cases being resolved in a shorter amount of time.”

For attorneys, e-Filing means using an online application called “File & Serve” to register, and to upload their complaints and pleadings. Self-represented litigants use “TurboCourt” with a guided interview that creates and sends completed filings to the court. It also prompts filers on how to attach and upload other documents that may be required for their cases.

Looking ahead, according to the Judicial Branch, the NH e-Court Program will “continue delivering benefits to New Hampshire citizens by expanding electronic filing in 2019,” including other civil cases in the Circuit Court and attorney filing in Superior Court criminal cases.

As access has expanded across the court system, the New Hampshire Judicial Branch’s Electronic Filing and Trial Court Information centers are increasingly in demand.

King, the incoming administrative judge of the Circuit Court (see story on page 38), gave a tour of the Judicial Branch Administrative Offices to NH Bar News over the summer.

Although the centers’ offices are tucked away at the bottom of the Lincoln Financial Group building at 1 Granite Place in Concord, inside, the air waves were humming with activity. The call center receives some 35,000 to 40,000 calls per month and has 20 full-time and 16 part-time employees.

In the first half of the year alone, the number of calls to the e-Filing help queue increased from two in January to 200 in June.

But it’s not just attorneys on the other end of the line — many of the calls are from the public, such as a landlord checking a reference or someone who has questions about making a plea by mail.

When broken down by court division, the District Court has seen the highest number of calls to the Call Center this year, at more than 127,000 calls, followed by the Family Division at around 76,000 calls; the Probate and Superior courts each had more than 45,000 calls (as of September 30).

The total in-person court staff time that’s saved by directing all inquiries to a central location is also noteworthy — 2,231 days.

The idea of having one information line for the entire state once seemed like a pipe dream. But, taking phone calls out of local courts has made the offices more efficient, King said.

“The lawyers didn’t like it at first,” King acknowledged, but added that almost everyone he talks to feels differently now. A lawyer can easily check on four cases from different districts at the same time, he explained.

An Initiative Years in the Making

New Hampshire has been at the forefront of the movement to digitize judicial systems. Although some states already offered e-Filing, the Granite State was one of the first to make e-Filing mandatory for self-represented parties at the time.

Although the initiative was designed to bring New Hampshire’s court system into the 21st century, it was also created to save money at a time when the state’s budget was strapped.

Following the great recession, the court system faced a $3.1 million budget reduction in 2010. An innovation commission subsequently presented a 10-year plan to increase efficiency and access to justice. However, in 2011, the state legislature pushed for the adoption of a unified circuit court — bringing together the probate courts, district courts, and family division, and adding the centralized circuit court call center — within months, as well as significant staff cuts.

Chief Justice Lynn has described the creation of the Circuit Court as a “Herculean task” — and the most signifcant overhaul of the New Hampshire Judicial Branch since the early 1980s, when the legislature unified the courts under a single administrative and financial structure.

Today, New Hampshire’s Circuit Court includes 32 district, 28 family, and 10 probate court locations that handle 90 percent of all cases filed in the state court system, according to the Judicial Branch.

In 2011, the innovation commission also recommended a five-year plan for creating a digital court system. While technical issues delayed the launch of e-Filing for the Supreme Court earlier this year, the project’s goals are now within reach by the end of 2019. Ultimately, Judicial Branch leaders hope the e-Court system will deliver timely, progressive technology solutions that ensure the courts remain a relevant and viable venue for effective dispute resolution.

Inside the Digital Courtroom

Back in his office, King demonstrated how quickly he could review estate cases on his computer.

“Now, you can open an estate with one form,” he said.

He had dispatched several within minutes and he said he can also process time-sensitive cases from home at night.   Initially, the requirement for mandatory e-Filing for self-represented litigants was seen as potentially problematic.

“[But], we’re finding exactly the opposite,” King noted. “It’s making it a lot easier for them … and for us.”

He reported that access to justice has increased due to the changes. The software is user-friendly, and the numbers are “pretty remarkable,” he said, with disposition time down across the state.

By New Hampshire court rule, electronic filing is mandatory unless a case party requests to be excused from the requirement. King is proud that less than one percent of cases filed have included excusal requests since the start of the e-Court project.

Small claims defendants are approximately 95 percent self-represented, according to the Judicial Branch. Of the more than 59,000 cases filed electronically since 2014, 43 percent were filed through the self-represented system. Currently, about 15 percent of all Circuit Court cases are e-Filed.

For some guardianship cases, the transition to the e-Court system cut time to disposition by more than half, from 186 days for a guardianship of minor (person and estate or estate only) case to 52 days. Guardianship of minor (person only) cases also sped up, with the average time to disposition 128 days in 2014 compared to 81 days in 2017 — even as the number of total cases in both categories increased.

Wills and estates recently finished a full year of e-Filing and have already shown decreases in processing time.

The e-Court software also allows King and other staff to quickly see how many cases are in a given queue, which case has been open longest, and other critical issues.

“[E-Filing] drastically reduces the time it takes to schedule a hearing,” he said, and the local court doesn’t see the cases until the day of the case.

Previously, with 10 different probate courts there were “10 different ways of doing things,” King said. Now, “they all get the same attention.” 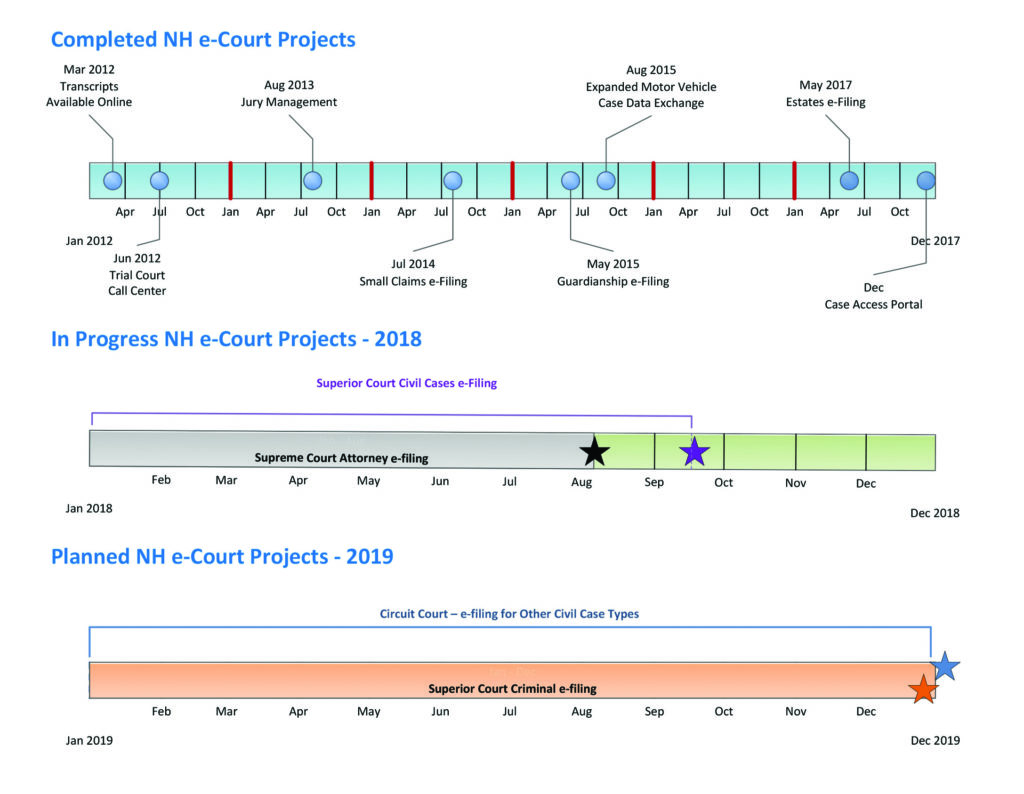