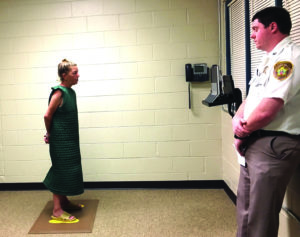 A woman is arraigned, via computer, at the Hillsborough County Jail (Photos: Pat Grossmith)

Late in August, a woman wrapped in a padded, quilted garment appears passed out on the floor of a locked cell at the Hillsborough County House of Corrections, familiarly known as the Valley Street jail or just Valley.

“It’s actually the safest place for her,” says jail Superintendent David Dionne.  The woman, he explains, is detoxing.

In another cell, an older woman, dressed in a green quilted suicide wrap with her hands cuffed in the back, is gingerly led out of her cell and walked to a room off an indoor basketball court.

She stands in front of an oversized Hillsborough County Department of Corrections emblem and talks to a 9th Circuit Court — District Division — Manchester judge via a computer as a court bailiff looks on.  She is granted personal recognizance bail, ensuring her release that day.

These two women are among the 27 inmates — eight women and 10 men detoxing, and nine others on suicide watch — being closely observed by correctional officers.

They account for 11 percent of the 245 people being detained this August day and, Dionne says, the number is a reflection of the opioid epidemic sweeping the state and, in particular, Manchester. 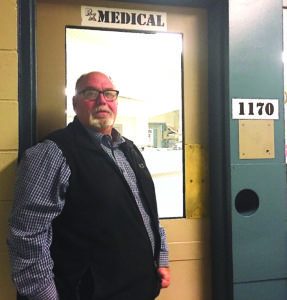 Dionne says correctional officers check on each of those inmates every 15 minutes, keeping detailed notes about what is happening to them: “It’s not easy.  It’s hard,” he says.

Due to lack of available data, it is difficult to estimate the exact percentage of people who come into county jails addicted to opioids. But recent state statistics show that about 50 percent of inmates at the NH State Prison have a diagnosis of Opioid Use Disorder (OUD). The state doesn’t publish similar statistics on county jails.

What this means is that the jails have to serve not just as a holding pen for alleged criminals, but medical facilities for people going through an excruciating and potentially fatal withdrawal process and who need continued care and treatment options throughout their stay.

In June, the Opioid Task Force, part of the Governor’s Council on Alcohol and Other Drugs, released a report on the “Status of Treatment of Opioid Use Disorder among Individuals Involved with the New Hampshire Justice System.”

Among the report’s recommendations was that the state consider adopting a set of common principles and guidelines — based on nationwide best practices — for treatment and care of substance use disorders (SUD) in the corrections system. This recommendation comes, in part, after the task force found no such set of standards and practices among the county jails.

Unless or until such practices are adopted, inmates and jail officials are left to grapple with a fragmented system, where access to treatment options, funding and community support can be scarce.

How Did We Get Here?

County jails are overseen by county commissioners, who are tasked with conserving county budgets —  or seeking state funding from the county’s delegation — while providing necessary local services. (See sidebar on page 20) Because counties don’t earn revenue from housing inmates, jail superintendents “want our numbers to go down, not up,” explains Michael Frost, an adjunct professor of justice studies at Southern New Hampshire University and retired assistant superintendent of the Essex County Sheriff’s Department in Massachusetts.

But Frost says the challenge is that, “county facilities across the country are the ones that receive the inmates with the most needs and the lowest budgets to provide those needs.”

For reference, as of October 2019, the most recent available data, Strafford County continued to have the highest suspected drug use resulting in overdose deaths per capita, at 2.42 deaths per 10,000 population, while Hillsborough County was second, with 2.23 per 10,000 population. According to county budget documents, in 2018, Strafford allocated $12.2 million to its jails; Hillsborough, where Valley Street is located  had a budget of $16.8 million for its jails.

While it’s the money that makes the jails run, it’s the perspectives of a county’s commissioners that can determine the policy within a jail’s walls.

Jeanne Hruska, political director for the ACLU of New Hampshire, says “it’s well known that there are differences among the houses of correction” because their respective counties drive their policies.

The state doesn’t mandate what type of rehabilitation programs each county offers, giving autonomy to the superintendents whose budgets county delegates oversee. That said, the state’s own Task Force pointed out the litany of research that shows: “SUD treatment across the criminal justice system has been found to reduce criminal activity, arrests, as well as probation revocations and re-incarcerations.”

Also, it noted a recent federal court decision mandating MAT in a Massachusetts jail (see story on page 17) and, pointed to federal grant funds available to pay for implementing it. The Task Force even went so far as to make access to MAT its very first of seven recommendations.

According to the report and Bar News reporting, almost all of the county jails offered some SUD programming. (See data at www.nhbar.org/publications)

The Task Force found that all responding jails have onsite counselors available, offer case management services, and provide other supports and services to promote “wellness and successful re-entry to the community.”

But, MAT services “vary substantially” among jail programs, the task force found, with some offering no medication, some offering medication only to pregnant inmates, and few being able to continue treatment for incoming inmates with prescriptions.

In July, Dionne sent a letter to county commissioners telling them that MAT had to be initiated because of the recent court decisions. Toni Pappas, chair of the Hillsborough County Board of Commissioners, said this month that commissioners asked the county delegation for a supplemental budget of $750,000 to cover the cost of the Medication-Assisted Treatment program.

She said hopefully the delegation will meet within the next few months and approve the supplemental funding. If not, she said jail Superintendent David Dionne will insert the $750,000 funding into the 2020-21 budget.

Lack of staffing was another issue the Opioid Task Force raised in its report: “While no standards were identified with respect to recommended staffing ratios in justice settings, expanding provider capacity across the justice system is likely to improve SUD treatment outcomes and reduce provider stress and burnout.”

But getting the staffing isn’t always an easy sell. Keith Gray is superintendent of the Belknap Jail and was a contributor to the task force report. He says his $4.4 million budget is the smallest among correctional facilities of a similar size, namely Sullivan, Grafton and Carroll counties — all with fewer inmates and a weaker tax base.

“And so that to me did not make sense,” he says.

In 2015, Belknap county delegates unanimously approved an $8 million bond to construct a new building and launch a Corrections Opportunity for Recovery and Education (CORE) program, which typically spans 20 months. The new facility opened in 2017. When Gray needed more CORE staff a year later, a newly-elected delegation pushed back, countering that taxpayers shouldn’t foot the bill for a self-afflicted malady.

“I basically got into a battle,” says Gray. But, after six to eight months of heated discussions, he prevailed.

For next budget year, Gray has asked for an 8 percent increase in his budget (which was $4.4 million in 2019), including a significant amount to pay for the MAT program. He wants to add a full-time nurse, pay for additional clinician services, and medications.

Before the launch of MAT, Gray says inmates were only treated for symptoms of addiction. Once released, they often relapsed and overdosed. Now, inmates get medication in combination with behavioral therapies, and they work with case managers to develop post-release plans.

“It took me one and a half years to get it up and running,” Dionne says of SATCO.  “If they want the help, it’s here.”

But, he says, the inmate has to want the help and give up his or her old ways: Otherwise, it’s a waste of time. There are plenty of others [who do want the help].”