HomeFind Hope in a Polarized World

Find Hope in a Polarized World

A mandatory civics education program in every state where students learn basic constitutional rights isn’t a requirement, not yet.

Although, if those who participated in this year’s We the People program are going to be shaping the laws of the future, it certainly could be.

Nathanial Sartel, a student at John Stark Regional High School who plans to study Civil Engineering next Fall, thinks there is a lack of civics education that leads to an uneducated voting populace and low voter turn-out.

“I did a project last year on civic education and engagement that got me thinking and I made a Bill that called for civic education. I just think more people should be educated on basic constitutional rights.”

His teacher, Trevor Duval, joked, “this is why we keep him around.”

We the People is a program of the National Center for Civic Education that has been sponsored by the New Hampshire Bar Association since 1987. According to some of the students taking the class this year, including those from Hollis-Brookline, Milford High School and John Stark Regional High School, the class has changed their perception about the role of politics and their sense of civic responsibility. It has also allowed them, they agree, to grapple with issues of constitutional democracy in an increasingly polarized political climate and to see first-hand how the constitution continues to shape American culture.

Because of the recent New Hampshire primary and the looming presidential election, questions of what candidate to vote for, what party to chose, and whether one’s vote makes a difference, are on the minds of many first time voters. While Sartel’s peers agree that voting is a privilege and an important responsibility it is more important, they agree, to be educated.

“I wouldn’t necessarily want someone to be voting without being educated on the issues just because they feel like they need to be voting,” said Josh Ide, a Hollis-Brookline senior on the student council who plans to study Economics in college. “I just wish everyone could have a chance to learn what we’ve learned. Take a step back from all the political polarization we see today and realize what our country is.”

Mary Martin, a senior from Hollis-Brookline who voted for the first time in the February primary, agreed with Ides. Martin will be attending Boston College where she will study Hispanic Studies and Political Science.

“People seem turned off by politics today. They think it’s a dirty game, but you have to remember government runs this country, it’s not about what it has turned into, so I agree with Josh, being civically engaged doesn’t just mean just voting. It means being educated on the issues.”

“It’s a dangerous game,” Lily Coady, who plans to study political science next Fall, added.  “Because both sides want dramatic action. I spoke with someone the other day who said they would either vote for Trump or Bernie Sanders because they would at least create dramatic action. And I think that there are a lot of things that need to be done but it’s dangerous when those things are so opposite to each other. We can only decrease it by communication. Getting down with someone who you don’t want to have a conversation with. It humanizes the issues that you might disagree with.”

Being from New Hampshire provides a unique experience for students to become civically and politically engaged and for Martin and many of her peers this has meant meeting candidates and canvassing in her hometown.

“A lot of people think it doesn’t matter for me to vote or know the issues. I’m the only one really politically engaged in my house,” Martin said, describing a conversation with her older brother she had recently. “He told me he didn’t vote and I asked him why. He said ‘well, it doesn’t effect me,’ and I said, ‘everything effects everyone,’ the class experience reminded me of that.”

Coady, who said she has canvassed for Sanders, believes the We the People course has taught her a lot about the foundations of government and the ways it is connected to everyday life in the United States.

“In terms of politics, this is general, because I’m talking about the whole population in the country, but I think we’re  moving towards a more politically involved group in the country, but as far as constitutional principles and what’s written down in law this is something that’s really important.”

Principal Rick Barns commended the program as an authentic learning experience for students.

“From an administrators point of view this is the best example I can think of real competency based learning. This was their midterm. That type of experience allowed them to demonstrate what they learned. Very bright kids. I think other schools should be doing this.” 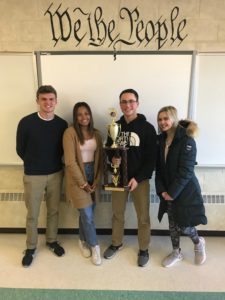 Marcus, who teaches AP History and Civics at John Stark Regional High School, has also been involved with the We the People class for fifteen years. Only three schools participated in this year’s event and Marcus attributed this to both a decrease in federal dollars being spent on these programs and the need for teachers around the state to become involved.

“There are fewer federal dollars being spent but the Bar is amazing,” he said, speaking about the organization and its commitment to civics education. “They put together a great competition. Kids that do this program have a deep understanding of government and the constitution and they’re more likely to vote. For me it feels good to see understanding emerge. Kids expect it to be like math but they see that it involves interpretation.”

John Stark student Jessica Nitzschke, who turned 18 in time to vote in the February Primary and who plans to study law and environmental science next Fall, said it’s a privilege to vote. She credits her awareness and confidence in Marcus’s class which maintained a rich engagement with current events, as providing valuable lessons.

“This is a responsibility that a lot of countries don’t have,” Nitzschke said, adding that voting for the first time was a little stressful at first. “I wanted to be safe so I actually went the Thursday before to register. I wasn’t sure if I had the proper ID. I also had to ask my Dad if I could vote for people from each party and he said, ‘nope.’ I felt like I did what I needed to do though.”

Dave Alcox’s student’s at Milford High School emphasized many of the same themes of their peers at Hollis-Brookline and John Stark Regional High School. Andrew Burns, who will be 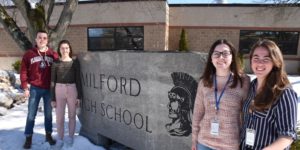 joining the Army this summer, said he is the lone republican in a house of democrats. Burn’s father is a democrat serving as a representative in the New Hampshire state legislature.

Party affiliation isn’t a problem, Burns explained, because he feels that his education has allowed him to talk about the issues and not simply his party.

“Everything is defined by partys’,” Burns said, adding that kids he knows often either don’t care about politics or they simply pick a party based on their parent’s beliefs. “We don’t get enough civic education. Kids see things on the internet and they believe this or that but they don’t know why.”

“We have so much information at the touch of a button that we don’t often take the time to learn more,” Raiano said.

“Kids don’t think they can make a difference. But they can go out and do something,” Auger added.

Dave Alcox, who will be retiring after this year, would like to see students given more responsibility. For him this involves education as well as active participation in the political process.

“If they’re 17 at the time of the primary they should be allowed to vote,” Alcox said. “If they’re already out canvassing, why not.”

Last April Alcox took some of his students on a trip to Washington D.C. where Burns and classmate Elizabeth Roadcap had the opportunity to attend a social media course at Georgetown. Burns said the trip was inspiring. “To sit on the steps of the Capital eating Ben and Jerries was pretty cool.”

Roadcap, who voted for the first time in February’s primary, said she watched the debates and listened to various candidate speeches. She is excited about voting in November and concerned about the polarization in politics today. One of her insights was similar to that made by the philosopher, Socrates, over 2000 years ago in the world’s first democracy in Athens, Greece. Socrates made his living and his name in history by questioning those aroound him who were more concerned with winning arguments than the truth. In the year 2020, Roadcap said this means, “being interested in what’s best for our country instead of just winning popular arguments.” Her hope is that, “people will begin to come together.”

Students in the We the People classes agree that civic education is necessary for citizens to to make wise voting choices. With the one hundreth anniversary of the ratification of the 19th Ammendment coming up in August, following a decade long struggle for women’s suffrage, young voters like Roadcap are looking back and finding wisdom in the process and the struggles of a democracy to maintain justice throughout history.