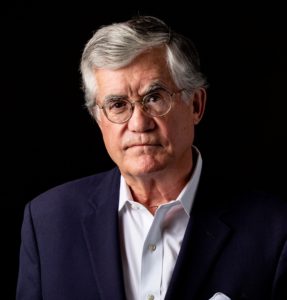 publicly about mental illness, sharing his story and the work he does as Senior Director of External Affairs at Dartmouth Hitchcock Hospital. Last June, Broderick created a video for Dartmouth Hitchcock’s REACT mental health awareness campaign. In the video, he outlines his journey of awareness and understanding about mental illness—from his days as a child living north of Boston, where he feared a neighbor’s relative who visited on Sundays from the Danvers State Hospital, (also known as the State Lunatic Hospital), to the assault by his son in 2002 that opened his eyes and led him to the advocacy role he performs today.

Since May 2016, Broderick has visited hundreds of schools in multiple states emphasizing the importance of learning how to recognize mental illness and how to destigmatize it. In the video made for Dartmouth last summer he expresses his excitement about the day the program was launched in 2016.

“We launched it in an empty house chamber in Concord. The state has 400 state reps in New Hampshire, and they weren’t in session. We were just going to announce the launch of a non-partisan, non-political public awareness campaign. I thought, ‘who’s going to come to this at 10 am on a Monday?’ I got there expecting 20 people—425 people came. It was the most impressive room ever assembled in my four decades in New Hampshire…it was stunning.”

I interviewed Broderick in late January for the “Living Well” supplement in the February Bar News that features an article about Assistant Merrimack County attorney Brendan Cahalin’s recovery and struggles with alcohol and mental health. Broderick talked about his work, lawyer wellbeing, and the work being done to address substance abuse and mental health stigma in the legal community.

The last I knew you had been speaking with people in multiple states about changing the conversation surrounding mental illness. Can you tell me what you’ve been up to lately in your position at Dartmouth Hitchcock?

First of all, I want to say how much I admire the young man you spoke of in the article. It takes a lot of courage to do what he did. And it took courage on the part of his employers as well.

Even though we’re all living in the virtual world, I continue to speak whenever I’m asked. In the last several weeks, I’ve spoken to hundreds of students, nurses and others around the state. Just the other night, I spoke to a virtual forum sponsored by the New Hampshire School Boards Association and the New Hampshire Association of Principles. What I’ve learned after four plus years is that it doesn’t matter what the venue or the audience is, it’s a topic that everyone relates to and often very personally. And it’s a topic that has been in the shadows. The invitations keep coming and it’s a topic whose time has come and that’s true for the legal profession as well.

What is the focus of your talks?

My presentation is basically the same. Last June, I recorded a 33-minute talk with Dartmouth Hitchcock. It’s a generic talk in the sense that I talk about my family story and what I’ve learned in schools around New Hampshire and that I’m open to questions from whatever the group is. Those questions are usually the same. They’re often about someone’s own child or spouse, or how to find help. This is a topic that effects so many families and people and I never realized it, but I do now.

As an attorney did you ever struggle with mental health or use substances to cope with stress?

I’m sure I was stressed. But, I say that because you asked, not because I would have said that. I certainly felt tired some days, I was a trial lawyer. I’m a non-drinker, I’ve always been a non-drinker, so I didn’t self-medicate. But a lot of lawyers, as we know, and law students, are suffering from anxiety, depression and substance abuse issues. It’s often alcohol and it’s at percentages that are greater than the percentages of the population as a whole, and greater than other professions. One statistic from various ABA studies also shows a high percentage of depression and anxiety for young adults going to law school, which, given my travels over the years speaking to young people, doesn’t surprise me. But the percentage of law students who have anxiety and depression by their third year is dramatically higher than when they entered. I had really good lawyers that I practiced with who had drinking issues and would keep it under control during the day but you’d see it come up at summer bar meetings and no one wanted to talk about it or deal with it. A lot of times drinking is either a co-occurring problem, substance misuse and mental health, or its self-medicating a mental health problem that is not understood and that people are afraid to talk about.

According to the Program Director at the Plymouth House Recovery Center attorneys make up the largest group of young professionals he counsels. A lot of professionals, he says, are worried about admitting they have a problem because they’re afraid what others will think. What are some of your thoughts about stigmas in general

and as they pertain to lawyers?

That’s on all of us. When people are afraid to talk about their problems that’s with good reason. That, historically, has been the culture. You don’t mention it because people will think you’re deficient. A lot of people with mental health and substance problems are highly capable but they can keep it contained when they have to and don’t go out of bounds. My simple message is, unless and until we’re willing to stop judging people and stigmatizing people and can have a new conversation around substances and mental health nothing will change. The minute we do, everything will change. It’s a very common problem we’re talking about here and it’s epidemic around law students.

How could the ABA’s well-being pledge and the seven-point framework it lays out, calling on firms, bar associations, and others in the legal community to recognize the high levels of problematic substance use and mental health distress, be helpful in addressing stigma and getting people the help they need?

The ABA’s well-being pledge is critically important. They’re calling for a cultural change and we need to support those who need help. These problems are made worse by secrecy. It does a job on firms, but not only that, it harms the individuals and their friends and families.

Lawyers have a high stress job. If you and I were baseball players and we got a hit one out of three times, we’d be in the hall of fame. If you’re a trial lawyer and you won one out of three cases you’d be unemployed. There’s an enormous stress and a number of externalities like social media today that makes it highly competitive for younger lawyers.

The simple answer is, ‘could we all just exhale, acknowledge that these things effect really good and decent people, and try to help them. It’s simple to say but hard to do. I’d like see the NH bar association lead the parade and the NH supreme court out ahead of the bar association. The wellbeing pledge is really important because it will create a culture of change and a safe harbor who need it. If our supreme court embraces the pledge I think that would be the first in the nation.

What’s the reluctance? The last I knew only a handful of firms had signed on.

When they do it [take the pledge], it’s one thing to say to lawyers that they should do this. But the lawyers might say, ‘what are you doing inside the judicial branch?’ I think there are state employee associations or union issues so I suspect they’d need to resolve that. It’s not a question of commitment to it but before they tell you to do it they need to be able to do it themselves. It should be at every business in the state to be honest. The ABA pledge is simple and life changing. I’m sure it has already changed lives. When lawyers start to receive the message that mental health and wellbeing is about competence and being a better lawyer, not a weakness, or a flaw, that mental health is part of physical health…Why we treat it like an aberration—‘if it’s below your neck we’re all on board but above your neck we worry about you.’ It’s so wrong and sad; we’ve done it for so long. It has been treated for generations as a weakness or a character flaw. We’d never say to someone with diabetes, ‘oh snap out of it.’ But people say that to people who are depressed all the time.

The state Supreme Court Committee on Character and Fitness said last summer that it will no longer include questions on its bar application about mental health diagnosis or treatment. I assume you were glad to see this addressed?

I’m embarrassed because when I was chief justice I’m sure this question existed and I didn’t know it. Our supreme court, at the urging of two law students, eliminated that question. We don’t ask people if they’ve had diabetes or a broken foot. It’s that cultural overlay that says, ‘if you had that maybe you’re not capable.’ What happens, according to surveys, that question discouraged them from getting help while in law school. What sense does that make? Thank goodness our court said get rid of that question and those law students deserve so much credit. That was really one step forward and the ABA well-being pledge is another.

What is something you’d like to see happen in 2021 that addresses well-being for attorneys?

I would like people to finally say—that which we all know or should know is true—that mental health issues and substance abuse issues affect a lot of good people we know and work with and love. And it’s about time we grew up and dealt with it and not look down on people who are suffering. I feel badly for lawyers in the shadows who feel something’s not right and that if they share it they’ll lose their stature in the bar or the firm. That’s on all of us. Not just on them.