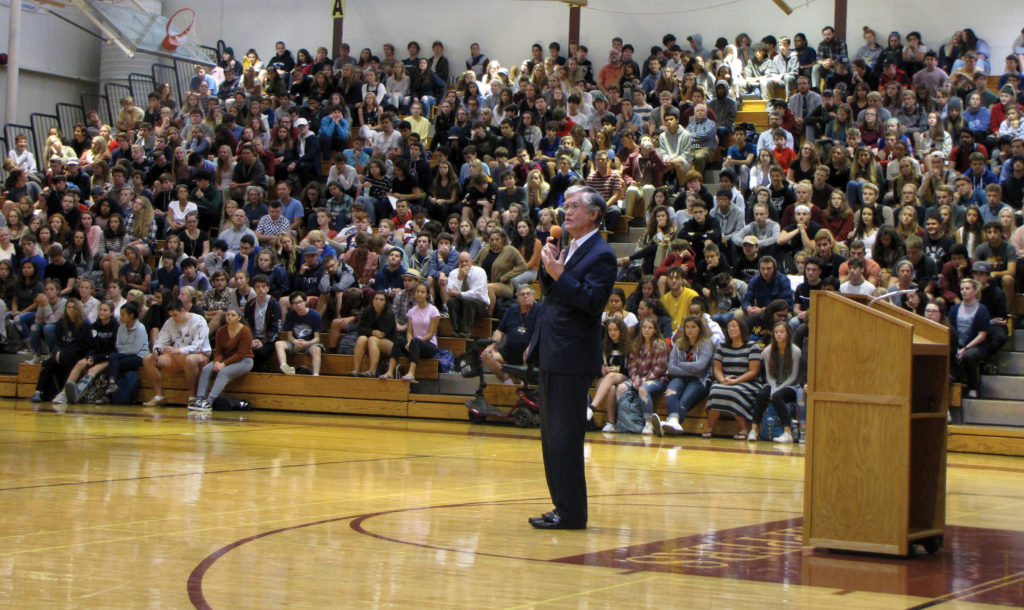 While asleep in his bed on a spring night in 2002, then-New Hampshire Supreme Court Associate Justice John T. Broderick Jr. was beaten unrecognizable by his son.

Media across the country carried stories of the attack, drawn by the seeming rarity of so distinguished an individual harmed by one of his own.

Now, 16 years later, Broderick is on a mission to raise awareness about what triggered his family tragedy and visits suffering on many others: mental illness.

The pursuit has seen him travel more than 65,000 miles and speak at more than 320 venues — many of them high school auditoriums and gymnasiums — with the same message: mental illness is common, often treatable, no cause for shame, and something all should be alert to in themselves and those around them.

It’s time, he says, to have a “new conversation” about mental health to prevent the next generation from suffering in silence. More than 68,000 people have now heard the message.

Broderick brings to his campaign a storied professional past. He spent 22 years as a trial lawyer and 15 as a judge, including six as chief justice of the New Hampshire Supreme Court. Upon leaving the bench, he became dean and president of the University of New Hampshire Law School, then launched the Rudman Center for Justice, Leadership and Public Policy at the school.

But his present work “is the most important thing I’ve done in my entire professional life,” he says.

He gives his presentations as part of the R.E.A.C.T. Awareness Campaign at Dartmouth-Hitchcock, where Broderick now serves as senior director of external affairs. The campaign was inspired by the work of Maryland psychologist Barbara Van Dahlen, who devised a “five signs” model for recognizing the symptoms of emotional distress (see separate story). The state education departments of New Hampshire and Vermont are also supporters of R.E.A.C.T.

Some 400,000 R.E.A.C.T. cards listing the five signs and what to do about them have been distributed thus far, according to Broderick. The campaign also maintains a website and offers YouTube videos on the subject. A public awareness radio campaign is in the works.

Broderick begins most of his talks by describing how taboo the subject of mental illness was when he was a child growing up in a northern suburb of Boston — to the point where he would not visit his best friend across the street if his friend’s uncle happened to be visiting while on a pass from Danvers State Hospital (a psychiatric facility).

Later, as a parent, he did not recognize its signs when one of his two sons, John Christian Broderick, known as Christian, started avoiding social activities in high school and often retreated to his room to draw.

“Now,” Broderick tells his audiences, “I would say he was withdrawing.”

Christian went on to college, where his friends would sometime take aside Broderick and his wife when they visited campus to express concern about Christian’s drinking. The drinking continued during graduate school and after, and Christian lost his first two jobs after only a few weeks.

Broderick and his wife sought out experts who told them Christian was an alcoholic and that they should either put him on the streets and hope he would hit bottom and seek help, or allow him to live with them, knowing he would ultimately die of the disease.

They chose instead to place him in rehab — multiple times — with the result so unsuccessful that Christian started drinking on the plane on the way home from his last treatment center.

The Brodericks decided to kick their son out of their home — considering it a “tough love” decision at the time.

“Knowing what I know now about what he was suffering from, it was the worst decision I ever made,” Broderick says.

After three weeks of Christian sleeping in his car or at shelters, his parents brought him back home, where Broderick says he remained “so traumatized” by his homeless experience that he was drinking more than ever.

But alcohol was “a symptom,” Broderick says now. “That wasn’t his problem.”

Then came the middle-of-the-night attack — one so severe that Broderick’s friends could not recognize him at the hospital, he required six hours of surgery to repair facial fractures and he spent eight days in intensive care.

“I think he just snapped,” Broderick says. “I think he was scared to death we would put him on the street again.”

Ironically, Broderick says now, “It was the beginning of recovery for everyone in the family.”

After six months at the Valley Street Jail in Manchester, the younger Broderick was sentenced to 7 ½ to 15 years in prison, with four years suspended, after he pleaded guilty to first-degree assault.

It was there, in New Hampshire’s state prison, that his real problem was diagnosed.

The Brodericks went to visit their son after the requisite 30-day waiting period and were met by the chief psychiatrist, who told them Christian suffered from depression and “off-the-chart” levels of anxiety and panic. The drinking, he told them, had been Christian’s effort at self-medicating.

“My son went undiagnosed and untreated for more than a decade,” he says.

Doctors prescribed medications that made all the difference.

When he visited his son four months later, Broderick says, “Christian said, ‘Dad, I feel so different. My palms aren’t sweating all day. I can focus.’”

Christian married his college sweetheart while in prison and Broderick presided, a fellow inmate taking $1-per-photo Polaroid pictures of the event.

Christian was paroled after three years, and he and his wife now have a child.

“They’re doing great,” Broderick reports. “My granddaughter is now 10. My son has not had a drink in 12 years.”

Broderick himself continued along his career path on the bench and later at the law school, but always with the sense he had a message to share.

Where breast cancer was once whispered about before the pink ribbon campaign, and AIDS was not widely recognized until Magic Johnson’s diagnosis, mental illness has had no such burst of public concern, according to Broderick.

“Every illness from the neck down is treated with empathy, respect and understanding,” he says. “Mental illness needs a Magic Johnson moment.”

Three years ago, Broderick got the opportunity to start sharing that message when he got a call from William Gunn Jr., head of behavioral health at Concord Hospital, who had been approached by Van Dahlen. She was interested in launching a New Hampshire affiliate of her Five Signs campaign, which is run nationally by a group called Change Direction.

Broderick, Gunn and Peter Evers, CEO of Riverbend Community Mental Health in Concord, introduced the new campaign at a State House ceremony in May 2016. Some 425 people showed up, ranging from Supreme Court justices to the governor to civic leaders.

The group quickly raised $330,000. The funds were used for materials, consultants, mileage and television public service announcements, according to Broderick.

When Broderick joined Dartmouth-Hitchcock in April 2017, he was encouraged to continue the campaign. A new component, R.E.A.C.T., was also added, offering tips on what the average person should do if they saw signs of mental illness in others.

Broderick has also enlisted the help of notable allies like current Supreme Court Chief Justice Robert J. Lynn and Attorney General Gordon MacDonald to accompany him to some of his presentations.

“It’s important to hear from someone like John, in light of his background as a practicing lawyer and chief justice, widely respected, that mental illness is a real thing,” Lynn says of Broderick. “It’s something that really does happen and it happens with a fair amount of frequency, across cultural and political and philosophical lines.”

Noting that many of those who appear in court suffer from mental illness, Lynn adds that Broderick’s efforts to destigmatize the disease are also helpful.

“It may very well be in some cases that people with mental illness do bad things, for which they need to be held accountable, but just the fact that you have mental illness doesn’t make you a bad person,” Lynn says.

MacDonald also emphasizes Broderick’s professional background when he introduces the judge during their joint appearances and tells audiences he wishes such presentations would have been available when he was in high school “because I know it would have changed lives.”

He adds that as attorney general, “the issue of undiagnosed mental illness informs so much of what we do at the Department of Justice.”

“If I had the ability to change only one thing in our society, it would be to help us better address that issue,” MacDonald says.

Broderick and MacDonald noted that they are working on a yet-to-be-announced project involving the state criminal justice system and increased awareness of mental illness.

Listening to Broderick speak before a school group “is quite an experience,” according to MacDonald.

“[W]hile he’s speaking, I’m able to look at the audience,” MacDonald says. “These are high-schoolers and they are intently focused and visibly moved when he speaks.

“Invariably when he’s done, there’s a long line of students waiting to speak with Justice Broderick. He’s more than ready to give them a hug or a word of encouragement. It’s just a very, very inspiring thing to see.”

When Broderick spoke at that school, “Our kids were on the edge of their seats listening to somebody of that magnitude being able to express what he went through as a father,” Collins says. “He connects with kids because he tells a personal story.”

Awareness as a starting point

Broderick’s is not the only state campaign that helps individuals become advocates who use personal stories to raise awareness about mental illness in the state.

The New Hampshire chapter of the National Alliance on Mental Illness offers an “In Our Own Voice” education program in which trained presenters share stories of their own mental illness and recovery. Another NAMI program, “Life Interrupted,” allows trained family members to share their experiences to help change attitudes and open minds.

“It gives the audience a sense that there is hope out there, that treatment can be helpful,” Bernie Seifert, director of adult services for New Hampshire NAMI, says of the In Our Own Voice program.

She notes that Broderick has appeared at many NAMI events.

“We love Justice Broderick,” she says. “His story is so compelling.

“His story shows how strong the stigma is and how it can get in the way, and the lack of awareness, how it’s never too late to turn it around.”

But any awareness campaign also faces a challenge: What happens next?

As NAMI Executive Director Ken Norton notes, awareness can only do so much if those who suffer from mental illness or their families don’t have access to treatment. That is why NAMI works with legislators and others to try to improve access to care.

He says he also measures success by “the attention students pay to my remarks and the hundreds and hundreds of students with wet eyes and cracking voices who thank me for coming to their schools to talk about mental illness.

MacDonald agrees, saying, “I’ve seen these kids one on one, and I’ve seen their faces in these large audiences,” he says. “I can see his message getting through. You can feel it and you can see it.”

Broderick says he hopes the message extends even beyond those school auditorium walls.

“Every time you help someone with a mental health problem,” he says, “you help all the people who love that person.” 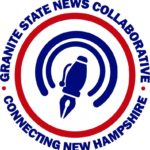