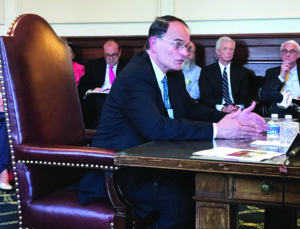 Chief Justice Robert Lynn remembers when he got a job as an agent at the newly-formed Drug Enforcement Agency in the early 1970s. Not yet 22 years old and straight out of college, he was the youngest person in his DEA class.

He was eager to get into law enforcement and, with the then-recent passage of the 1971 Controlled Substances Act, there were plenty of opportunities in what would later be dubbed the War on Drugs.

“There was this big push to have this crackdown on drugs of all kinds,” Lynn recently told the Bar News in an interview at his Concord office. “I was very much on board with the crackdown.”

Working the drugs beat was the “sexy” field of law enforcement at the time, Lynn said.

His later work as a federal prosecutor in New Hampshire and other states tended to focus on high-level drug traffickers (often the purview of U.S. Attorneys General), so he said he rarely encountered the so-called “street-level” dealers who are often addicts themselves.

It wasn’t until he was appointed as a Superior Court judge in 1992 that Lynn began to see the other side of the war — that the footmen of the opposition, distributing often deadly drugs and stealing to get their fix, were themselves already defeated before officers put them in handcuffs.

That steady stream of regular people suffering with mental health issues, including substance use disorders, walking in and out of his court started to change how Lynn viewed the conflict.

His perspective evolved over his long career in the justice system — 18 years as a NH Superior Court judge, including six years as chief justice, and nine years as an associate and chief justice on the Supreme Court. And, given his experiences over the past 50 years, Lynn said he would tell the young DEA agent he once was to consider the complexities of mental health and substance use disorders, which he said are often co-occurring.

“Things may not be as clear cut, as black and white, as I thought they were back then,” Lynn said. “Society is never going to arrest their way out of or lock up their way out of this issue.”

Lynn will step down from the Supreme Court on August 23, in advance of his 70th birthday three days later, at which time he is obligated by state law to retire.

On June 11, at a panel held in the Dartmouth-Hitchcock Medical Center in Lebanon, top judicial and law enforcement officials from New Hampshire and Vermont discussed the intersections of the criminal justice system and mental health issues. During that event, Lynn told the audience about how his mind was changed.

He said he was a “late-comer” to the thinking that the enforcement model should not be the end-all be-all for dealing with societal problems.

Today, he is a strong supporter of drug courts and mental health courts, he said. And, on a number of occasions, he has joined former Supreme Court Chief Justice John Broderick to speak at local schools about mental health and reducing stigma.

He said at the panel discussion that Strafford County’s drug court program has a recidivism rate of about 22 percent.

“You may say that’s pretty high, and it is — it is pretty high,” Lynn said. “Until you consider the national average of recidivism for people who are brought into the criminal justice system for substance abuse issues is about 67 percent.”

He said they’ve seen the same kind of positive response in the mental health courts in New Hampshire, which are still fairly new. That approach, he said, is expected to be much more successful than the typical “revolving door.”

“Somebody commits a minor-level crime, they get locked up; they go to jail for a certain period of time, they don’t get any treatment; they’re back out, and the police are dealing with them again for the same kinds of things,” Lynn said of the old approach. “That just doesn’t make any sense.”

Vermont Supreme Court Chief Justice Paul Reiber agreed, noting that the current model of corrections is based on 19th century political philosopher Jeremy Bentham’s notion of punishment as deterrence, but Reiber said that “doesn’t work” for people with mental illness and addiction.

A number of unique solutions to dealing with mental health — from crisis intervention team training for police to learn how to deal with mentally ill people to critical incident exposure supports to help officers when they themselves suffer from the aftermath of a traumatic experience — were discussed. And, the discussion and the participants made the event historic, according to Broderick.

“I daresay a panel like this has not been assembled in the United States, on this topic,” he said.

Kacavas said the need for a discussion about how law enforcement and the courts can change the conversation about mental health was evident from his time as a federal prosecutor. Too often, he said, mental health issues went untreated and when citizens reached a crisis point in their lives, it manifested into criminal behavior.

“Their ills, whether they were social, physical or mental, were left to the justice system to handle,” Kacavas said.

Young said it was important to treat people suffering from mental illness with compassion.

“Until we start to peel back that onion, and really understand the human psyche and treat them, we’re just going to continue to spin,” Young said.

She said New Hampshire and Vermont are ground zero for the mental health issues and addiction, and the region could be a springboard for change.

Donovan said jails are effectively the largest mental health facilities in local communities, but building a new system focused on rehabilitation would enhance public safety and be far cheaper. We just need the courage to build it, he said.

As Lynn prepares to retire, he is hopeful that the criminal justice system is already improving how it deals with mentally ill people who commit crimes.

And, he said the best solution is likely one that involves prevention.

However, Lynn said prevention is still an abstract concept, and few who use the word know how it will be practically applied. At its worst extreme, Lynn fears that a movement toward preventative measures could manifest as a police state with people turning neighbors and family members in for mental instability, and court-ordered treatment programs could be forced upon unwilling patients.

Lynn said it will likely be up to the next generation of legal professionals to answer those questions, as society seeks to find a balance between safety and civil rights.

Ryan Lessard is a freelance writer based in Manchester. Part of an ongoing Bar News series examining the justice system’s response to the state’s behavioral health crises, produced by the Granite State News Collaborative.