HomeFuture of Judicial Nominations Unclear After... 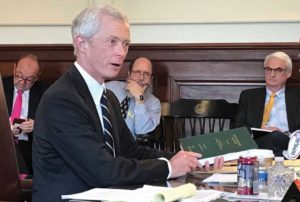 Governor Chris Sununu halted all judicial nominations on July 10 after the state’s Attorney General did not receive enough votes from the Democratic-controlled Executive Council to be appointed as the next NH Supreme Court leader.

Three councilors, all Democrats, voted “no” on the nomination of Gordon MacDonald as chief justice of the Supreme Court.

Sununu called the vote the end to bipartisan politics in New Hampshire — and the way New Hampshire has done things in the past — adding it was time for a break from nominations and confirmations for judicial posts.

“This body has a tradition going back literally hundreds of years working in a non-partisan manner and today the Executive Council has thrown that right out the window,” Sununu said.

“That is the bare minimum, but I am seeking more,” Pignatelli said, “a court balanced on the political-philosophical spectrum from liberal to conservative. And wouldn’t it be nice to have gender balance as well.”

Martin Honigberg of Concord was also up for confirmation as an associate justice of the New Hampshire Superior Court at the meeting.

But Sununu pulled his nomination off the table after the vote on MacDonald, which Pignatelli called “childish.”

The meeting was held at the Littleton Opera House in Littleton where MacDonald sat in the audience and heard the concerns raised by Democrats.

“I’m going back to Concord to do that work,” MacDonald said.

Councilor Andru Volinksy, who voted against the nomination and recently announced that he is eyeing a run for governor in 2020, released a statement explaining his vote: “Many Granite Staters have approached me questioning Gordon MacDonald’s qualifications to be the state’s top judge, our Supreme Court’s chief justice. They asked about his lack of judicial experience and the fact that he has not tried a single jury trial. They questioned whether MacDonald can overcome his partisan past. They expressed concern about the unprecedented campaign organized to secure his nomination and worried about MacDonald’s management of the Department of Justice as our state’s Attorney General. All of these questions, coupled with my own concerns, led me to oppose his confirmation.”

There are less than six weeks left before Chief Justice Robert Lynn’s mandatory retirement on August 23. It’s unclear whether Sununu will restart the nomination process at one of the two remaining Executive Council meetings scheduled before Lynn steps down, on July 31 and August 14.

Inside the June 26 Hearing

While Democrats on the Executive Council questioned MacDonald on his conservative political leanings during the June 26 confirmation hearing at the State House, MacDonald leaned into his expertise in civil litigation and experience developed leading and reforming a state department.

During the hearing, MacDonald repeatedly tried to assure councilors that as chief justice of the New Hampshire Supreme Court he would be fair and impartial and leave his personal beliefs at the door, saying the institution “represents the transcendent importance of the rule of law.”

“It will be my duty to uphold the law regardless of my personal views,” MacDonald said.

He said decisions should and would be made based on the facts of individual cases, and he said Roe v. Wade was “settled law” that he would be required to uphold in any abortion-related cases that are brought to the Supreme Court.

MacDonald also highlighted the new initiatives he launched as attorney general: a civil rights unit; an office of the solicitor general, which advocates for the state in appellate courts; a not-yet-active dedicated position to train prosecutors across the state; and the addition of a director of communications for the Department of Justice.

MacDonald would have been the first chief justice in recent history to have never been a judge before joining the state’s highest court. Upper Valley Councilor Mike Cryans expressed concern that MacDonald had no judicial experience.

MacDonald responded by saying a chief justice is also the administrative head of the state’s entire judicial system, and he brings executive experience that a judge may not share.

“I have been running a state agency for two years,” he said.

MacDonald said he also has experience dealing with the legislature advocating for department resources as attorney general.

Pignatelli asked MacDonald if he thought it was important to have a philosophical balance on the Supreme Court. He said the court is not meant to be a political institution, and judges should hold fidelity to the law rather than political philosophy as the guiding ethos.

He also said a mix of justices with and without judicial experience is good because it allows for more diversity.

Pignatelli asked several questions about MacDonald’s previous work as chief of staff for former U.S. Sen. Gordon Humphrey, as an attorney representing the Diocese of Manchester and as a board member of the right-leaning think tank, The Josiah Bartlett Center for Public Policy.

“That’s a different role. I was acting as a private citizen. I am asking to be judged as a judge,” MacDonald said.

The issue of abortion came up often during the hearing. Democratic councilors expressed concerns over what they see as a concerted effort at the federal level to chip away at or overturn Roe v. Wade.

Volinsky asked MacDonald whether the issue would have to be decided by the states if Roe is overturned, and whether the state could potentially rule that abortion rights don’t exist.

While a number of Bar members stepped forward to support MacDonald before the confirmation vote, Volinsky also questioned the process behind  the selection of judicial candidates (see story on page 6).

But, 18 former Bar presidents —  including the most recent presidents, David McGrath and Scott Harris — criticized the “politicization” of the nomination process in a letter published July 9 and urged the Councilors to confirm MacDonald or risk the errosion of faith in the judicial system.

“As leaders of the Bar, with regular interaction with its nearly 8,000 members, we can attest to the widespread respect and esteem that the bench and bar have for General MacDonald,” the letter said. “… Failure to confirm such a high performing, well qualified standard bearer for attorney service ostensibly for failure to provide guarantees on the outcome on certain issues is fundamentally troubling … While this may appear to be just one political moment in time, we think it is more than that. At a minimum, it would erode the faith in the judicial system as a place where fair minded individuals may different in attempting to reach the best decisions possible and instead suggest it as just another place where politics is played while the public awaits a fair result.”

However, in his statement, Volinsky called on the governor to nominate an experienced judge for the position as part of a more collaborative process with the Council: “Once a nominee is confirmed, there is little opportunity for recall,” he wrote. “A judge is a judge in New Hampshire until mandatory retirement at age 70. The norm across America is to nominate appellate judges from the ranks of experienced judges who have established their ability to set aside personal bias. New Hampshire is fortunate to have two well-respected non-partisan chief judges who have long and distinguished judicial careers: Judge Tina Nadeau of the Superior Court and Judge David King of the Circuit Court. Both should be considered for appointment to the Supreme Court.

“… the other Councilors and I stand ready to provide advice, to cooperate with the Governor in the selection of our next Supreme Court justice and to work collaboratively for the people of our state. It is our duty to do so.