Two years ago, an independent review team saw an opportunity for a new approach to protecting New Hampshire’s children through increased collaboration. After the team determined that the state’s Division of Children, Youth and Families didn’t have sufficient staff, training or services to adequately protect kids, it recommended increasing the availability and reach of the state’s drug courts to help.

“[T]hese courts have shown promise in addressing the treatment needs of substance-abusing parents who are child welfare involved, and there is a body of evidence supporting the use of drug courts for child welfare populations,” the New Hampshire Child Welfare Quality Assurance Review said.

Since then, the state has adopted several of the team’s recommendations — including more rapid access to treatment — but there’s been less progress on creating a court specifically for child protection cases where parents are misusing substances. Cost has been one obstacle.

A legislative study committee charged with investigating the feasibility of a family drug court in New Hampshire met twice and concluded last October that creating one would be “very expensive” and a huge undertaking but did not comment on its potential merits.

The committee referred the question to the legislative committee tasked with responding to the 2016 DCYF review. Sen. Dan Feltes, a member of that committee, said the group is focusing on legislation to intervene earlier in child protection cases.

“We need to get upstream and really do prevention,” said Feltes.

But while Judge Susan Ashley said those are steps in the right direction, the legislative measures aren’t a replacement for what a specialized family drug court would offer. Ashley started the state’s first criminal drug court 13 years ago and is lead judge for the state’s Model Court Program.

A Family Drug Court, she said, would create a systematic approach to child protection cases that honors the seven essential practices recommended by the Federal Office of Juvenile Justice and Delinquency Prevention (see box). 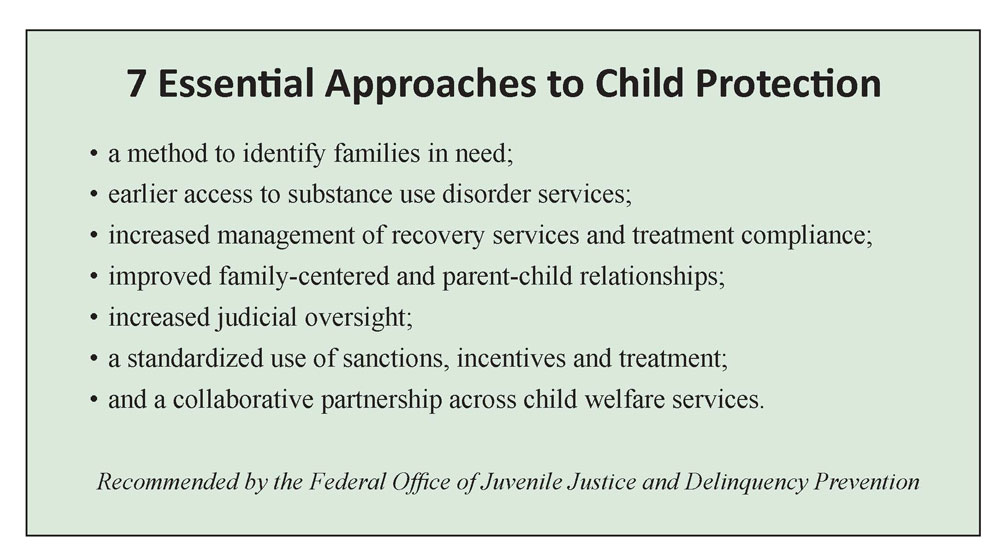 It’s undeniable that substance-involved families need more support and services, according to state officials. DCYF petitions for termination of parental rights are up 60 percent since 2014. And while neither the courts nor DCYF has tracked how many of those petitions are related to substance misuse, it’s considered a significant factor.

“Anecdotally, I can say quite a lot are,” said Ashley.

The concept of a Family Drug Court is not a novel one; at least 28 other states use them, including Maine and Massachusetts. Nor is it without support in New Hampshire; DCYF and the judicial branch have advocated for it.

Theresa Lemus, program director of Family Drug Court Training and Technical Assistance at Children and Family Futures in California has worked with many states to create these specialized courts. She said nearly 500 family drug courts are hearing cases now and another 100 are in the works.

Newer courts are intervening earlier, not waiting until a child has been removed from the home, she said.

“There is an old adage that you have to wait until [parents] hit rock bottom,” Lemus said. “But a lot of research says the earlier you identify parental substance abuse and intervene, the more likely [the] child … never has to be split from the home.”

There have been 17 studies of family drug courts since 2004 and the conclusions are consistent, Lemus said: Child protection cases in substance-involved families are about 54 percent more likely to end with reunification when they go through a family drug court.

The model differs from the 10 drug courts currently operating as part of the state’s superior court system in two significant ways: it wouldn’t take criminal cases or use jail as a sanction. Instead, it would be an option only for parents whose substance misuse has led DCYF to place their children in foster care and ask that their parental rights be terminated. Regaining custody would be tied to a parent’s success with substance use disorder treatment and, if pertinent, treatment of their behavioral health needs.

“Instead of criminal penalties hanging out there, it’s really family reunification that is of central focus and a kind of motivation for parents struggling with substance use disorder,” said Joseph Ribsam, director of NH DCYF.

In all other aspects, a family drug court would look a lot like the state’s existing drug courts, said Ashley.

The court would oversee the coordination of services and, thereby bring the kind of systematic approach Ashley sees as necessary. Parents would come to court weekly. They would work with a team that includes a judge, DCYF staff, treatment providers, the child’s guardian ad litem, the parent’s attorney, and a case manager. The team would encourage and support parents but also hold them accountable with drug tests and an expectation that they engage meaningfully in treatment. The court could fast-track a parent’s entry into substance use disorder treatment as well as mental health treatment if needed.

“The more we can do to intervene earlier and provide parents the ability to seek treatment and correct the issues, the earlier that is going to benefit the well-being of these children,” Ashley said.

Prior to the 2016 report, DCYF alone had not been able to give substance-involved families that kind of holistic, ongoing support, according to the review by The Center for the Support of Families. The team found:

DCYF could not require treatment and had too few child protection workers to track whether families pursued it.

The agency did not drug test parents when it assessed a report of abuse or neglect or before they reunited parents and children.

“Safety plans” given to some families essentially asked that at least one parent stay sober when they had their children.

The agency often closed reports of child maltreatment — even when substance misuse was established — unless the child had obvious injuries, because the state’s legal threshold for proving child abuse and neglect was so high.

DCYF workers had too few community options for treatment referrals.

Among the review team’s recommendations, was that of increasing the availability of drug courts in New Hampshire.

“In other places these courts have shown promise in addressing the treatment needs of substance-abusing parents who are child welfare involved, and there is a body of evidence supporting the use of drug courts for child welfare populations,” the report said.

Since the team’s review, criminal drugs courts have started in four additional locations. But those new courts do not focus on families and children.

State Moves Forward with Other Programs

The state is not waiting for a family drug court to adopt many of the report’s recommendations.

The state Department of Health and Human Services introduced a new program, Strength to Succeed, last year that combines mental health and substance use services and more quickly connects families with drug, alcohol and mental health treatment as well as peer support.

Just prior to the release of the report, the state had amended the Child Protection Act in two important ways. There is now a rebuttable presumption of harm when a custodial parent is dependent on or abusing opioids. And, judges may order alcohol or drug testing at any stage of a child protection case.

DCYF has arranged for substance abuse awareness training for its caseworkers and attorneys to educate them on the potential future harm of a parent’s substance misuse. The state’s new hub and spoke system has made it easier for parents in child protection cases to access treatment.

And, in addition to requesting more child protection workers, lawmakers are considering a bill that would create a new statewide mobile crisis response and stabilization team for assisting children suffering from serious emotional disturbance. The team would work with the child’s wraparound-care coordinator to ensure needed treatments were provided and be part of a court-ordered treatment if the case went to court.

Although a new crisis team would not address parental rights cases, Feltes, the bill’s prime sponsor, said it is a valuable early family intervention tool that would help kids get help at home, in their community rather than in an institution. The measure passed the Senate unanimously and is before the House.

“I think it can look different, depending on the needs of the state.”

Annmarie Timmins is a freelance writer based in Concord and an ongoing contributor to the Granite State News Collaborative.