Governor Stephen Merrill remembered by friends and colleagues in Concord

A memorial service was held Friday afternoon outside the statehouse in Concord for former Governor Stephen Merrill, 74, who died September 5.

Former Chief Justice John Broderick spoke fondly of his personal and professional relationship with the late Governor, referring to him as his “closest friend.” 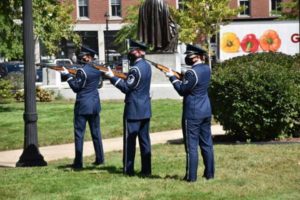 “We were friends for over four decades,” Broderick said. “His life and mine were intertwined. He made me better.”

Broderick, a democrat who served as the New Hampshire Bar Association president from 1990 to 1991, was appointed by President Clinton to the board of directors of the national Legal Services Corp. in 1993, and to the NH Supreme Court under then Governor Merrill.

Broderick’s tribute on Friday afternoon for his former law partner was a testament to the meaning of friendship and to a long relationship that transcended party lines. One of the reasons for this, he explained, before giving his eulogy, was Merrill’s tireless sense of humor and his charisma.

“He just drew people in a room to him like a magnet,” Broderick said.

One of the anecdotes Broderick mentioned Friday spoke directly to Merrill’s sense of humor and happened while Broderick and Merrill were law partners.

“When we were in our early forties and we started our own law firm we thought life was endless and the possibilities would match that. And one day, in the early days of our practice together, we went to lunch in the back room which is where we ate most days. We’d both heard a eulogy in the recent past and it became a topic to talk about. We thought it was pretty poignant and powerful. And in that context, because we loved each other, ‘I love Steve Merrill,’ I said, ‘why don’t I give the eulogy at your funeral.’”

After a brief smile by Merrill, which then turned “pensive,” according to Broderick, Merrill had said, “’I could agree to that but I just have one favor to ask you.’ I said, ‘what’s that Steve?’ He said, ‘I’d like to give your eulogy first.’ We laughed about that for years. He’s probably laughing today.”

Merrill, a former Captain in the U.S. Air Force, known to have coined the term, “the New Hampshire Advantage,” was given a three-volley salute Friday and was honored by other former colleagues and close friends who shared personal stories.

Ayotte referred to Merrill as a mentor and a friend with a sharp sense of humor that she attributed to his curiosity and a keen ability to understand people.

“He was one of the smartest, most articulate leaders I’ve ever met, and this was because he understood people,” she said, adding that, “If he hadn’t become a brilliant lawyer he could have been a comedian.”

Ayotte, who recalled the “Merrill smile that always made you feel welcome,” said she feels blessed to have known someone like Merrill who was a source of “sound advice,” and who “would always find the time.”

“He stood by me in tough times,” she said, “And that’s the true definition of a friend.”

Merrill graduated with a J.D. from Georgetown University Law Center in 1972. He went on to serve in the Air Force as a lawyer until 1976, where he was legal counsel to the Secretary of the Air Force from 1973 to 1975.  From there he practiced law in Manchester until 1984. After this he became the state’s attorney general and was then elected for two terms as Governor, from 1993 to 1997.

In 1982, former Gov. Sununu brought Merrill in as legal council and it was a decision that turned out to be the “ideal choice,” Sununu said, holding back tears and adding that Merrill was “a great lawyer, public servant, and friend. We shall truly miss him.”

“I was supposed to lose big,” Sununu recalled, speaking about his first run for the governorship in 1982. “I wasn’t prepared to do what I had to do in office but I knew the first thing was to find legal council. Norm Stahl at Devine recommended Steve and I found out quickly that Steve was a serious person who was serious about issues, but that he didn’t take himself too seriously. It was a perfect combination.”

Merrill was a political figure who cut through party lines, according to Broderick, speaking to the crowd about a recent phone call expressing condolences from former President Clinton.

“He (Clinton) really admired him,” Broderick said, adding that “Steve touched so many lives from this building behind me. I knew him for four decades, before his public life and after and I loved him. He is the single most important person I’ve ever known.” 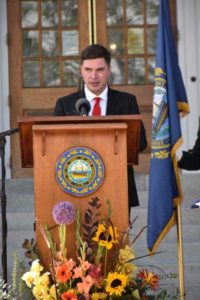 Merrill’s oldest son Ian closed out the day of tributes by thanking Governor Chris Sununu and his staff as well as those who have served in the military.

“Your love and support has picked us up during a very difficult time. None of us expected this and none of us wanted it. I just have to thank you, to all of you who are here. Thank you to all the true American heroes in this world. And thank you Dad, thank you.”

If the ‘true definition of a friend’ involves trust and the “inspiration that comes to one when you discover that someone else believes in you,” as Ralph Waldo Emerson said, then the friendship expressed by Broderick for Merrill is representative of this.

“He always inspired me to do better. I think I know how it felt for Costello when Abbot died. Steve was such a gift. I love him,” Broderick said.