Gar Chiang’s law office in Boston’s Chinatown is an easy drive to the on-ramp for Interstate 93 and the New Hampshire clients he represents there.

“I might be the only Chinese-speaking attorney in New Hampshire,” Chiang says over Dim Sum at the Great Taste Restaurant in Chinatown. His remark is a reference to the search results his office assistant, Angie Reider, noticed when she used the terms ‘New Hampshire’ and ‘Chinese speaking attorneys.’

“[People] up there want Chinese-speaking attorneys,” Chiang says.  “[M]aybe I can explain the terms of their cases to them easier.” 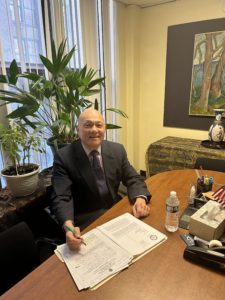 Chiang, 71, a Boston native whose parents were from Beijing, is a general practitioner who brings an international perspective to his work, representing clients in criminal defense, immigration status, business startups, estate cases, and landlord-tenant disputes.

But his career in the law didn’t begin until he was nearly 60.

After graduating from Boston English High School, Chiang moved to New York City where he studied entertainment administration. He later found himself working for years as a general manager in the entertainment industry at Carnegie Hall, off-Broadway, and Lincoln Center, where he had a chance to meet such cultural icons as Yo-Yo Ma and Pavarotti.

While he is not a performer himself, per se, Chiang’s passion for the arts is sometimes displayed as an attorney according to Reider, his office assistant.

“When he’s at a hearing, it’s like a performance,” she says, playfully teasing her boss who seemed to agree. “He has a lot of energy.”

Richard Rouse, former Sheriff of Suffolk County in Massachusetts, Supreme Court of Massachusetts Clerk, and a long-time friend of Chiang’s, has also noticed his enthusiasm and energy.

Rouse says the pair met while working on Boston Main Streets, a network of 20 Boston-area organizations that work with businesses and community members around the city to foster economic growth in commercial districts.

“Gar has a lot of enthusiasm,” Rouse says. “He’s a good, decent fellow.”

Rouse was a member of the Mission Hill Main Street program in the 1980s and met Chiang who served on the board of directors when he was living there.

“He is a consensus builder and that was his role as one of the Directors of Boston Main Streets,” he said. “He brings people together.”

After spending seven years in the performing arts and entertainment industry in New York City, Chiang, who grew up speaking Mandarin, went to work for a Fox News affiliate in China for eight years. After returning to Boston from that job, he became a court interpreter in Massachusetts district courts—working on over 3,000 cases—as well as for then-Mayor, Thomas Menino.

“I had a lot of passion for that job, and I thought ‘this is perfect,’” Chiang says. “It was my basic training for becoming a lawyer.” 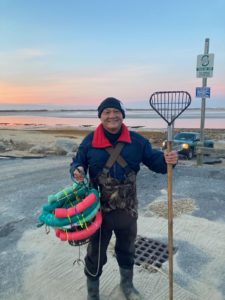 Chiang’s decision to become a lawyer grew while working as an interpreter, where he says, at first, he was unclear about a lot of the instructions and motions taking place in court.

“My favorite was ‘motion limited,’” he says, with a laugh. “I wanted to go to law school to be able to learn about these things, and I really got into it.”

After graduating from law school and becoming a member of the Massachusetts Bar in 2011, Chiang started his own practice. He was later sworn into the New Hampshire Bar in 2017.

As an older attorney, he says his experiences are sometimes less formal than they might be for an attorney in their 20s or 30s. He recalled the day he was sworn in as a member of the New Hampshire Bar.

“I was talking to one of the judges about Social Security, and we were sharing stories,” he said. “That’s not something a young attorney is probably going to do.”

Since then, Chiang has been an active member of the New Hampshire Bar, attending association events and handling multiple cases involving business startups and criminal defense in New Hampshire.

In 2021, he was selected as a member of the Bar Association’s Leadership Academy.

“I always thought I could get a lot out of it [Leadership Academy] but thought I’d be too old,” Chiang says. “I’m having a lot of fun with the younger lawyers.”

At a recent Leadership Academy event with New Hampshire judges and clerks, that included New Hampshire Supreme Court Chief Justice Gordon MacDonald and Chief Judge of the United States District Court, Landya McCafferty speaking about their careers, Chiang was quick to observe the support that New Hampshire attorneys receive compared to what he has experienced in Massachusetts.

When he’s not in court, Chiang spends some of his time digging for oysters and clams, even in the middle of the winter. On a recent day in Barnstable, he said he needed to break through a quarter inch of ice before he could dig.

“The importance of having a wonderful hobby like clamming is that it connects me to all those wonderful things nature has to offer—fresh air, the ocean breeze, our beautiful seacoast, blue sky, sea water, and fresh clams and oysters,” Chiang says.  “It’s a good balance to my legal work.”

Paul Richard, chair of Webster First Federal Credit Union’s Board of Directors, met Chiang five years ago and had the opportunity to go clamming with him in January. Chiang is currently a member of the credit union’s supervisory committee.

“Gar took me out and we had a great time,” Richard says, adding that he temporarily lost one of his boots in the mud. “We came away with two dozen oysters though and I look forward to going out there again.”

Richard says Chiang’s attention to detail, witnessed first-hand while working with him at the credit union, as well as his care for people in his community, are two qualities that make him a good lawyer.

“He’s a very sharp guy, very intent, and he can relate to people in Chinatown,” Richard says.  “A lot of people come over and can’t speak English and Gar’s there to help. He always comes across as inquisitive, and he’s very particular. From working with him over the years, I can see why he’s a very good lawyer.”

Rouse also referred to Chiang’s concern for people as one of the qualities that has made him successful.

“He knows how to get along with people,” he says.  “[Gar’s] not driven by money. He’s an attorney because he wants to help people, and he’s done a million favors for people. He’d be a good politician if he wanted to be.”

“I’ve referred cases to him and he’s always able to help. There was a speech I used to give before swearing ins about being a good advocate. That’s what Gar is.”

Chris Garner, a New Hampshire attorney, has worked on the opposing side of Chiang on two contested divorce cases involving Asian clients. He says the two worked together to reach an agreement for their clients.

“In one case, both parties were Asian, and it was very helpful to have his [Chiang’s] input because of his ability to communicate better with his client and my client,” Garner says. “He is very knowledgeable.”

While Chiang recognizes the importance of knowledge in practicing law, he says life experience is more important.

And as much as he believes in using his knowledge of the law to help his clients, Chiang says he doesn’t like to use the word help.

“There are two things to being a good lawyer,” he says. “Reasonable fees and returning people’s calls promptly.”

He considers himself a general practitioner and compares himself to a family doctor.

“I work with other lawyers, although I’m more like a family physician. If you need a heart transplant, I’ll get you the best. Maybe I won’t drive to CoÖs County, but I know someone I can call.”

As we finished our Dim Sum amidst the voices and the sound of glasses and pots rattling, a waitress approached our table asking if we wanted dessert, just as Chiang was describing a recent clam dig.

He asked her if she eats oysters, and when she said yes, he asked how many she’d like when he returns from his next trip. He seemed to make a mental note, and one might imagine him making a delivery of oysters the following week.

“I could eat like this every day,” he said, adding that he typically eats a lot less for lunch—usually oranges in his car on the way to the courthouse.

Looking around at the people in the restaurant, Chiang reflected on the Chinese culture of which he is intimately immersed.

“I think the Chinese community is different from other Boston communities like the North End. I don’t know. Chinese people here still want Chinese food, newspapers. There’s more of a sense of community. The best cheese used to be in the North end. Used to be, I don’t know. But I know the best Chinese food in Boston is in Chinatown.”

And then the conversation turned to how the practice of law allows him to help people in his community.

“I would never say I wish I had done it sooner. I love meeting new people every day,” he says. “Like today, I had three cases. A criminal matter, helping someone with an estate, and a probate case. I get to learn a lot. It’s the greatest job I’ve ever had,” he says.