HomeJohn T. Pendleton: A Judge With a Personal Touch

John T. Pendleton: A Judge With a Personal Touch 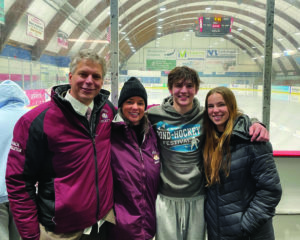 Circuit Court Judge John T. Pendleton tells the young hockey players he coaches not to worry about losing, but to concentrate on winning.

“If you’re consumed about losing or making a mistake, you’re not in the right place to play your best,” says the Concord native, an assistant coach for the Portsmouth-Newmarket high school hockey team.

It’s a philosophy he brings to the bench, where he is often called upon to make difficult decisions in cases where, for example, terminating someone’s parental rights might be devastating to the parent but in the best interests of a child.

“It’s very stressful to make decisions in cases where there is so much emotion,” says Pendleton, nominated to the court in December 2015 by then-Gov. Maggie Hassan. “The impact of your decision has such far-reaching consequences. If you get consumed worrying about that, you don’t make the right decision.”

Pendleton also brings to the bench a family history of law, years of experience as a practitioner, and a sensitivity to the plight of those suffering from mental illness.

Pendleton experienced early loss as a boy when his mother committed suicide after many hospitalizations for mental illness, leaving his father, former New Hampshire Bar Association President John B. Pendleton, to raise the couple’s children alone.

“People didn’t know in the ‘70s what to do with that,” Pendleton says. Though many prospective employers had known both his parents, “lawyers didn’t talk about it when I was interviewing,” he adds.

Longtime Manchester attorney David Nixon broke that silence when Pendleton interviewed with him. Nixon immediately said, “John T., tell me what’s good about you besides your mother,” acknowledging the whole woman she had been.

Pendleton later spent 16 years on the board of the Seacoast Mental Health Center, serving as president for three years. “It’s really important background to have when you’re doing family law, juvenile law and criminal,” he says.

Pendleton attended Concord High School for two years before going on to Proctor Academy, where he demonstrated his affinity for athletics by playing on the varsity soccer, hockey, and baseball teams.

At Trinity College in Hartford, he played rugby and baseball, but was cut from the hockey team as a freshman, to his deep disappointment, as “hockey was always my favorite sport.” The loss, however, did not stop him from playing men’s league hockey and later coaching youth hockey.

Following graduation, he moved to Manhattan to serve as a paralegal for a major firm near Wall Street, where he worked on some major cases, including one involving Paramount Communications and Time Inc. That famous decision established that shareholder profits are not the only factors a board need consider in long-term business planning.

The experience furthered his interest in law, and he enrolled at the University of Richmond School of Law, receiving his juris doctor in 1993.

At one law school party, he was smitten by a young woman who walked in looking for her brother. “I can tell you what she was wearing,” Pendleton says. “It was a red business dress with a high collar, and she just looked cool.” Sarah was her name, and the two have been married since 1995.

Upon graduation, Pendleton served as an assistant county attorney in Strafford County for two years, then worked for a year as a contract attorney for Shaheen & Gordon on a federal multi-district litigation case representing Honda Motor Company.

He went on to work at the Gleason Law office for three years, then to Gottesman & Hollis for four years.

For a time, he did the legal work for a company, of which he was part owner, that supplied American-made medical implants to Mongolia before a change in that country’s economy put an end to the business. He visited Mongolia twice, and recalls drinking fermented mare’s milk in a yurt and attending festivities for the national holiday, Naadam.

In 2002, Pendleton was presented with the New Hampshire Bar Association’s Robert E. Kirby Award, named after a young lawyer who died in 1996 at the age of 35. The award goes to a New Hampshire attorney 35 or younger who “demonstrates the traits of civility, courtesy, perspective and excellent advocacy.”

“It was the coolest thing that ever happened to me because I knew Bob Kirby,” he says.

Pendleton has also been a board member of New Hampshire Legal Assistance and spent nine years volunteering on the New Hampshire Plumbers License Board. “It was a good experience,” he says. “Serving on those licensing boards are important things for us lawyers to do.”

His work on the bench has proven to be more demanding than he anticipated, Pendleton admits, largely because of understaffing.

“We’re usually on and off the bench from 8 to 4 without a lunch break some days because we’re dealing with emergencies,” he says of Circuit Court judges. “Then you sit down at the end of the day when everybody leaves and write up the orders you didn’t get a chance to do. I don’t know that the wider Bar knows the issues facing the Circuit Court. The family Bar certainly does.”

Nevertheless, he adds, “it’s a wonderful job. I’m so proud of the work that the Circuit Court judges do.”

His work on the judiciary has won the admiration of attorneys who frequently appear before him, like John and Amy Driscoll of Driscoll Law in Portsmouth.

“Judge Pendleton treats everyone who walks into his courtroom with respect and civility,” says John Driscoll.  “His compassion is self-evident, and his patience is impressive.  He truly listens and I think litigants can tell.  In the most fraught cases, he is a calming influence on litigants and occasionally aggressive lawyers.  Aside from this exceptional demeanor, he is an expert jurist who draws from his diverse practice. Plus, he has nice hair.”

Amy Driscoll agrees, saying Pendleton “clearly knows the law, is prepared before coming on to the bench, and writes thoughtful orders, all of which is important, but what I appreciate about practicing in his Court is he remembers first and foremost that the litigants are people, not just ‘cases’ coming through.  He brings a certain humanity to the process.”

In off hours, Pendleton plays men’s league hockey, though he has had to miss many Monday night games because of his work responsibilities, and he notes that his team is the reigning champion of the Rangely Pond Hockey Festival (suspended since the start of the pandemic).

He has coached youth hockey for 10 years, since his son Caleb was 6, and this year helped coach the Clipper Mules from Portsmouth and Newmarket high schools to their first state championship, with Caleb scoring the winning goal in the Division II semifinals. The program had not won a playoff game since 2003.

“The team only won three games in each of the prior two seasons, but this year were 14-6-1, with the final loss being the state finals,” Pendleton says.

Fellow attorney and fellow “hockey dad” Emile R. Bussiere, Jr. says he and Pendleton have been “joined at the hip” since Pendleton started coaching their sons a decade ago.

“I quickly learned how generous he is with his time and how willing he is to lend a hand whenever someone needs it,” Bussiere says. “This is especially true for those people with special problems and in the most need of help.”

In addition to wife Sarah and son Caleb, Pendleton also has a daughter, Allison, a sophomore at McGill University, and Bussiere says Pendleton’s family “is always most important to him.”

“If I had to describe him in one word, it would be ‘committed,’” Bussiere adds. “He has a follow-through work ethic on everything he does in life.”