In her opening remarks to the Senate Judiciary Committee during her confirmation hearing, Justice Ruth Bader Ginsburg explained, “I see this hearing, as I know you do, as a grand 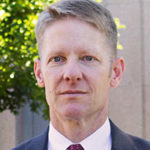 Daniel E. Will President of the NH Bar Association

opportunity once again to reaffirm that civility, courtesy and mutual respect properly keynote our exchanges.” Quoting Justice Frank Griffin of the Supreme Court of Ireland, she continued, “‘[c]ourtesy to and consideration for one’s colleagues, the legal profession and the public are among the greatest attributes a judge can have.’”

Justice Ginsburg was a powerful jurist and a symbol to many both for her views on constitutional interpretation and for what she achieved throughout her career as a woman. But her words to open her confirmation hearing capture something in Justice Ginsburg that transcends her persona as a Supreme Court justice, and that ultimately resonated with people far beyond the Court watchers among us. An icon on the bench for her work ethic, collegiality and commitment to the integrity of the Supreme Court, she became iconic off the bench because of her personal practice of those same values. In that way too she was a pioneer.

Justice Ginsburg recognized that the integrity of the judiciary depended on its independence as a branch of government. Speaking to the Senate Judiciary Committee as a candidate, she resolutely emphasized that “[b]ecause I am and hope to continue to be a judge, it would be wrong for me to say or to preview in this legislative chamber how I would cast my vote on questions the Supreme Court may be called upon to decide.”  She believed that the very legitimacy of an independent judiciary depended on a judicial candidate’s personal circumspection, emphasizing that “[a] judge sworn to decide impartially can offer no forecasts, no hints, for that would show not only disregard for the specifics of the particular case, it would display disdain for the entire judicial process.”

In 1993, times were different. The Senate Judiciary Committee members met Justice Ginsburg’s remarks with collegiality and respect, and seemed to understand their wisdom. Republican Senator Charles Grassley acknowledged that “[t]he confirmation process need not be a campaign trail of promises by a nominee.” Justice Ginsburg received strong bipartisan support from Senators who surely disagreed with positions she had taken as a public interest lawyer, garnering an 18-0 favorable vote in the Judiciary Committee and 96 favorable votes in the Senate.

That overwhelming majority of Senators must have seen then in Justice Ginsburg someone eminently suited to serving on the Supreme Court because, beyond ample qualification, of her regard for and commitment to the branch she would serve. And her actions bore that out. Even at the point of literal incapacitation, Justice Ginsburg doubled down on her commitment to the Court, working on judicial opinions from her hospital bed. But her work ethic became universally famous in the form of a diminutive and unassuming Supreme Court justice who, in her 80s, practiced a fitness regimen that would challenge people half her age. That inspiring work ethic, we learned, infused all aspects of her life, as did the collegiality she espoused to the Senate Judiciary Committee.

Of his friend George Bernard Shaw, author G.K. Chesterton once said, “[he] is something of a pagan, and like many other pagans, he is a very fine man.” Justice Ginsburg could have said as much about her friend Justice Scalia, someone with whom she routinely traded pointed dissents. According to Justice Scalia, the formula was simple:  “She likes opera and she’s a very nice person. What’s not to like? Except her views on the law.” And that was Justice Ginsburg’s point. Of her relationship with Justice Scalia, Ginsburg wrote, “[i]f our friendship encourages others to appreciate that some very good people have ideas with which we can disagree, and that, despite differences, people of goodwill can pull together for the well-being of the institutions we serve and our country, I will be overjoyed, as I am confident Justice Scalia would be.” She practiced what most of us preach, that regardless of one’s color, religion, politics or persuasion, we share far more commonality – be it appreciation for opera or concern for our families – than division, and that searching for that commonality yields the seeds of close personal relationships.   Justice Ginsburg literally strove to remind us of that.

Shortly after a recent New Hampshire Supreme Court argument, a senior, far more experienced  lawyer took the time to encourage me, and to give me reason to think that maybe I am finding my way in this profession — even though he desperately hopes I lose the appeal. Shades of Justice Ginsburg.  Our little bar association remains, by and large, a reflection of her model, that people of goodwill can pull together for the better of our institution. That reflection manifests itself in the unexpected encounter I had after arguing, and in similar encounters large and small that replicate throughout our association daily, year over year.

We pull together for the better of our organization through hard work, commitment and dedication and we do it through pursuit of the commonality among our colleagues that breeds human fellowship. And we continue to maintain the collegiality and professionalism that makes the practice of law so rich and fulfilling. Let us hew to Justice Ginsburg’s commitment to integrity, in particular to, and in, the institutions we serve. Justice Ginsburg’s example tells us we have something to defend and that no matter how lofty the position we reach or significant the issue we face, we ought approach every encounter among us as a “grand opportunity once again to reaffirm that civility, courtesy and mutual respect properly keynote our exchanges.”