Fittingly, Margaret “Maggie” Goodlander was born on Election Day 1986, her mother’s water having broken while still in the voting booth. 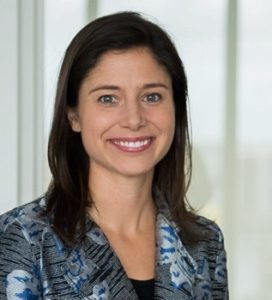 Politics have been in her blood practically ever since.

The Portsmouth attorney, 34, has worked alongside U.S. Sens. Joseph Lieberman and the late John McCain, has clerked for Judge Merrick Garland and U.S. Supreme Court Justice Stephen Breyer, has traveled to dozens of countries as part of bipartisan congressional delegations, and has helped craft landmark legislation regarding immigrants and human rights violations.

She also served as counsel for the U.S. House Judiciary Committee and House Managers during the impeachment trial of President Donald Trump.

These experiences have left her with strong feelings about what she sees as the erosion of constitutional norms, the politicization of the Supreme Court, the interrelationship between foreign and domestic policy, and the United States’ position as a democratic ideal.

“I traveled on 40 congressional delegations around the world,” says Goodlander. “The stories we heard from people who believe in the idea of America and the basic things we stand for, and our Declaration of Independence and our Constitution — we are a beacon of hope.”

A Nashua native, she attended Birch Hill Elementary School, where she was exposed to “a robust theater program” and an “extraordinary” teacher, Beverly Carter, while in the first grade. She and Carter stayed in touch over the years and when the teenage Goodlander sought a foreign exchange program in the Middle East while still in high school, Carter’s son was able to find her a host family in Libya, making her one of few Americans to travel to that country at the time.

That high school was the Groton School, a private, preparatory boarding school in Groton, Massachusetts, where every day began with a chapel service and the school motto is “service is perfect freedom.”

She went on to Yale University, majoring in history, and upon graduation went to work in the U.S. Senate, where she developed an interest in both legislation and the law, especially working as a policy advisor for Lieberman, himself a lawyer.

McCain, whom Goodlander met through her work with Lieberman, soon asked her to work with him on a bipartisan immigration bill and Goodlander hesitated, telling the Republican McCain she had voted for Obama. “He said something like ‘I know that, goddamit,’” Goodlander recalls, and the deal was sealed.

She speaks with admiration of the crusty McCain, whose passion some staffers wrongly took for anger, calling him a leader with little ego who “really looked for diverse points of view.”

Working on the immigration bill, Goodlander says, was “the honor of a lifetime… It crystallized the deep connection between what we call domestic policy and foreign policy and broke down the barriers between those issues.”

Though the bill never received a vote on the Senate floor, it became a blueprint for later proposals that included a path to citizenship for illegal immigrants, and Goodlander says she hopes it will be the basis for successful legislation in the future.

It also helped direct her own future.

“I was writing laws and participating in the legislative process,” Goodlander says of her time at the Senate. “It took me pretty much three years of working on The Hill to really decide I wanted to go to law school.”

So she did – again at Yale – after which Goodlander worked as law clerk for two federal judges, Chief Judge Merrick Garland of the U.S. Court of Appeals for the D.C. Circuit, and Justice Stephen Breyer of the U.S. Supreme Court.

She says the Senate’s failure to consider Garland for the Supreme Court, after his nomination by President Obama, was “personally very painful.”

“There were several members of the Senate I had come to know very well, including Sen. Lindsey Graham, who I’ve traveled the world with (as part of congressional delegations) and I respected deeply,” she explains. “It was really painful to see them refuse to even meet with Judge Garland, and refuse to fill their constitutional responsibility to provide advice and consent. It was one really profoundly damaging incident that fits into an unfortunate pattern of constitutional hardball. There is abdication of duty and undermining of constitutional norms that have been so important in ensuring that our government functions.”

She likewise sees the 2000 Bush v. Gore decision by the U.S. Supreme Court, in which the court handed victory to Bush after a contentious Florida recount, as “an extraordinarily damaging moment for the Supreme Court.”

“They are still working to recover from that,” she adds. “In the last four years there have been a series of additional incidents that really put a strain on the public’s perception of the court.”

Goodlander says she is glad President-Elect Joe Biden has called for a nonpartisan committee to study court reform “because we’ve reached a point where it’s confirmation wars, a constitutional lottery, and it shouldn’t be that way.”

Goodlander left Washington to join the New England firm of Skadden, Arps, Slate, Meagher & Flom drawn in part by its robust pro bono program, and stayed 11 months before being recruited as counsel for Trump’s impeachment trial. Charged with abuse of power and obstruction of Congress, the president was acquitted by the Senate last February.

“It wasn’t an easy experience,” she says of the trial. “I spent a lot of time with librarians looking at 18th Century treatises on what the Constitution meant by high crimes and misdemeanors.”

Back in New Hampshire, friend and fellow attorney Leah Plunkett, associate dean at UNH Franklin Pierce School of Law, invited Goodlander to teach administrative and constitutional law at the school, a position she still enjoys.

“Maggie is an all-star,” Plunkett says. “I’ve had the pleasure and privilege of serving with her on the UNH Franklin Pierce School of Law faculty, as well as teaming up in many areas of civic engagement. Maggie’s intellect, energy, integrity, and warmth are inspiring and energizing. She has deep roots in the Granite State combined with mind-blowing international professional experience. I feel profoundly fortunate to have her as a colleague in the New Hampshire bar, a community member, and a dear friend.”

Goodlander also went to work on a bipartisan bill – passed by the state legislature but vetoed by Gov. Sununu — that would have created an independent redistricting commission in New Hampshire.

One of those who labored with her on that bill, political strategist and voting rights advisor Lucas Meyer, calls himself “extremely fortunate” to have worked alongside her.

“Her sage wisdom has been invaluable,” he says, “whether it was during the process to pass the bipartisan advisory independent redistricting commission which was vetoed by the governor, or more recently ensuring voting rights during this pandemic. Maggie’s tenacity and dedication to our state has led her to quickly become a trusted voice and go-to legal expert.”

Goodlander has recently been working on a project with the Ford Foundation on how to restore U.S. global leadership. She is also counsel to Co-equal, a group dedicated to effective oversight of the executive branch.

An intelligence officer in the U.S. Navy Reserve, where she is a lieutenant, she also serves on the board of directors of New Hampshire Legal Assistance and the World Affairs Council of New Hampshire, a nonprofit fostering discussion and citizen involvement in world affairs.

In her spare time, she and her husband like to rollerblade, and she has also taken up gardening and amateur birding during the pandemic.

She considers one of her crowning achievements her work with the Senate Homeland Security & Government Affairs Committee helping to develop and codify the Sergei Magnitsky Rule of Law Accountability Act. The measure authorizes the U.S. government to sanction those it deems as human rights offenders, freeze their assets and ban them from entering the country.

“It’s a reminder that, at our best, the United States can be a leader and a beacon for people around the world,” she says.