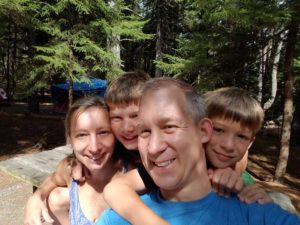 Meegan Reis with her husband and their two children Logan and Conner at Acadia National Park.

Meegan Reis is probably the only attorney in New Hampshire who lives on a 40-acre farm once owned by a family accused of witchcraft and aspires to create a practice that involves no time in court.

A partner in the Portsmouth firm of Dwyer, Donovan & Reis, she has a passion for alternative conflict resolution and a love of fair play that dates back to her childhood in West Hartford, Connecticut.

Reis’s youngest sister Courtney, now 40, was born a quadriplegic at a time when there was little mainstreaming of handicapped students, and Reis remembers her mother, Marilyn Lawson, becoming “incredibly active in disability legislation and advocacy.”

“Though she wasn’t a lawyer, she was very much involved in fighting for Courtney,” she says.

Reis’s mother was also active in prison reform and anti-discrimination work, sometimes posing as a single mother to visit rentable apartments to collect data on her reception compared to that of the black applicants who followed her.

Because of that influence, Reis says, she knew from the time she was a girl that she wanted to go to law school and become a public defender.

She did so – with additional roles added into the mix.

After law school, she clerked for a judge in Richmond for a year, after which she and her husband moved to New Hampshire in 1991 because “I like the ocean and Jim likes the mountains,” she says.

A year’s work at the Hampton firm of Casassa & Ryan followed, before Reis moved on to work for the Strafford County Attorney General’s Office as a domestic violence prosecutor for another year. After one court session, public defender Randy Hawkes asked her if he could take her out to lunch and talk her into being a public defender.

She agreed – to both. Reis was a public defender for eight years.

Then came the position that was to shift her perspective on the practice of the law.

Strafford County launched something called the Early Resolution Program with the goal of resolving cases between 30 and 45 days from the time of an arrest – seen as a way of getting quick services for those who might need them, among other benefits.

The program had a dedicated prosecutor – Reis – as well as a dedicated public defender – her old friend Randy Hawkes.

“We both trusted each other, and we got that up and running,” Reis says. “It’s a good program, a good idea.”

Nevertheless, initially everyone from judges to police officers were wary of it, she says, even before they’d had an opportunity to see it in action.

Reis made a point of having lunch with multiple police chiefs and getting “buy-in from everybody.”

“I think I realized that was what I wanted to do,” she says of the program’s approach. “I liked much more that kind of problem-solving, figuring out what we needed, what’s everybody’s goal. If it’s treatment, why do we need to wait six months? If it’s incarceration, let’s get them where they need to be… It makes it more efficient and you also don’t waste resources on cases that don’t need it.”

That experience informs the family law work she does now at Dyer, Donovan & Reis, which she joined in 2016, offering alternative conflict resolution like mediation and collaboration whenever possible.

“I think our courts are not so equipped to deal with family dissolution,” says Reis, a board member of the Collaborative Law Alliance of New Hampshire and a trainer in alternative case resolution. “In court, all of it is about controlling emotions.”

“When we talk about people who are going to have to be parents together,” she adds, “what matters to them is to be part of the process, letting it be emotional. Those conversations have to be had. And letting them have some control over what their life will be like. If they decide what their life will be like rather than a judge, they’re much more likely to stick with it. If they make those decisions, you have such better chances that it’s going to be followed.”

So successful are such approaches, Reis says, that she has seen some divorcing couples go out to dinner after a mediation session or, in one case, reconcile.

Law partner Libby Donovan met Reis in 2014 and thought she would be a good fit for her firm which, by design, is “non-traditional from what people think of as a regular law firm,” Donovan says.

“She is professionally highly regarded for her honesty, her humor and especially her intelligence,” she says of Reis.  “I love that Meegan has interests that aren’t just the law – something our firm promotes.

“What we do for work is practice law, but we bring our life experiences to it,” she adds. “Meegan takes that whole-heartedly. She has varied interests. She’s just super fun. She’s the person you want to sit next to at any dinner party.”

Newton, Massachusetts attorney Howard Goldstein has known Reis since they both attended a “peacemaking” workshop for lawyers in Boston in 2015, and says the event led both of them to move toward alternatives to litigation in family law cases.

Noting that divorce lawyers can make $15,000 to $20,000 or even six figures on same cases, he considers Reis’s choice to be a brave one, considering that fees in mediated cases are substantially less.

“Meegan has the extraordinary combination of really skilled, smart lawyering with tremendous compassion for her clients and yet she’s got the ability to set limits because you have to in family law,” he adds. “She’s caught the eye of a lot of important people in our profession.”

When not working, Reis enjoys indoor cycling, camping and hiking with her husband and two boys and working on the farm she bought five years ago with her husband, brother and sister-in-law.

The 40-acre Hepp Farm, as it was called, is the first and oldest farm in Portsmouth and, according to Reis’s research, was once owned by a man who was accused – along with his wife and daughters – of practicing witchcraft in Rhode Island. The family fled to Portsmouth and the land where she now lives.

Thirty-eight of the acres are in conservation, and two women run an equine center on the property.

Reis and her family keep 42 chickens at the farm and sell eggs to their neighbors, and she harbors a dream of growing flowers to sell to florists in her retirement.

But for the next several years, her focus is on practicing law – her style.

“One of my goals right now is to create a practice where I don’t go to court anymore, a practice that’s all alternative dispute resolution,” she says.