Portsmouth attorney James Mulhern’s credentials are so varied one might think they belonged to more than one person.

He graduated from the Schulich School of Music at McGill University in Montreal, where he was a classical piano performance major.

He earned a master’s degree in Accounting and Finance from the London School of Economics.

He has constructed some 20 crossword puzzles for the New York Times.

More recently, he has been working as a new attorney at Mulhern & Scott, the Portsmouth firm founded by his parents, David and Sally Mulhern.

“I had a long journey to the law,” he acknowledges.

He sees one unifying ingredient in that smorgasbord of interests and talents – music, and the self-command it requires. 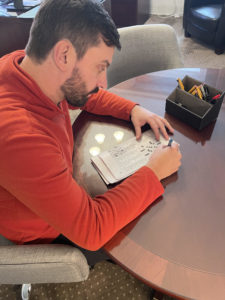 James Mulhern has a leisure moment with one of his favorite pastimes, crossword puzzles. Courtesy Photo

“I like to think that music informs almost everything else,” he says. “Being very disciplined, constantly being forced to work out little problems, that got drilled into me over and over. It taught me a lot about how to work through difficult problems, work on your own and work towards a deadline, being able to understand what it’s like to see a project through to completion. Transfer that to the workforce, and to law school, and at the end of the day you’d better be able to sit down with that exam.”

His love of music is what drew him to the Schulich School in Montreal, where he spent four years. When he graduated in 2008, “it was a very difficult time to try to make a career of that,” he says. “Enjoying playing the piano is very different from making a life that will support you.”

So, he went off to the London School of Economics, which offered a two-year masters degree program. The world was in the middle of a financial crisis “and I saw that aspect of the world up close and personal with all its warts,” Mulhern says. “It seemed an efficient and cost-effective way of getting employment.”

After getting his master’s, he soon joined the Analysis Group, a Boston-based firm providing economic, financial and strategy consulting, and quickly befriended office mate Ali Dahir, who still considers Mulhern one of his best friends.

“James is one of the smartest and most driven people I have ever worked with,” Dahir says. “I can confidently say he ranked in the top one percent among his peers.” Personally, “he has been there for me through some of the best and worst times of my life,” he adds.

Mulhern moved on to a New York high-tech firm, Palantir, which worked with the U.S. government and foreign governments – and more recently, the commercial sector – to make data more accessible for non-technical users.

But the job required considerable travel – Mulhern recalls one three-week period where he flew from New York to London to Singapore to Sydney to Los Angeles to Seattle to Boston to Chicago and then back to New York – and he began to wonder if it was the right field for him.

“The year before law school, after 200 nights in hotel rooms and 200,000 miles, I was looking into my future and thinking, how long am I going to be able to do this or want to do this?” he remembers. At the same time, his parents were looking to hire someone at their law firm “so there was this confluence of me looking for a new direction and my folks looking for some support.”

Harvard Law ensued, where Mulhern received a grade of “honors” in every class in which he was enrolled, and where he served as research assistant to Professor Robert Sitkoff, regarded as the nation’s leading trusts and estates scholar, whom he assisted in preparing a new edition of the well-known textbook “Wills, Trusts and Estates.”

Throughout law school, Mulhern worked at his parents’ firm and joined them after taking the bar last year, concentrating on trusts and estates, tax and appellate litigation.

He did so partly out of “a sense of responsibility for being a good steward for something my parents have created, but there are other things I really enjoy about it,” he says. “It’s very hard, one of the most tricky areas of law, this pile of ancient deep-rooted wings of property law that go back to feudal times, layered with all sorts of modern reform efforts in the field… You have very meaty classic law at the same time as something that’s also very dynamic and changing, when you combine the legal changes with the tax law changes. It doesn’t get old.”

Already, he has served as trustee on several trusts, and takes pride in having maneuvered “an extremely messy will” all the way through probate.

His regular companion at the office is his dog Hugo, a lab mix rescue adored by Mulhern’s office mates. “He lives the dream,” Mulhern says.

Leisure time finds him working on a hobby he started back in his days at McGill – constructing crossword puzzles for the New York Times. He explains that he starts with a theme, adds three to six answers related to the theme, builds other answers around them and at the end, writes the clues.

“Ultimately you want to make something that’s challenging, but it’s there to be conquered,” Mulhern says. “You want a sweet spot between tricky and disheartening.”

Mulhern has a collaborator in his crossword puzzle construction — Ashton Anderson, a friend he met at McGill who remains close with him to this day.

Says Anderson, “he (Mulhern) introduced me to crosswords when, strewn among the general chaos of his bachelor apartment, I saw perfectly filled-out NYT crosswords – things I had only previously associated with my grandmother. We started solving regularly, reading the critical takes in the newly-created crossword blogs, and eventually James dared to dream ‘what if we made a crossword?’”

“Although we didn’t know it at the time,” Anderson adds, “we were part of a whole new generation of crossword enthusiasts who coalesced into a strong community thanks to the internet. We set our minds to getting a crossword puzzle published in the New York Times, and years after that initial spark, we did it, and have been collaborating ever since.”

Anderson says Mulhern’s nimble mind is something that serves him not only with crosswords but with life.

“What makes him such a unique talent is his preternatural intuition,” he says of his friend. “He has an incredible ability to consider a complicated thing, divine its essence, and render a quick and accurate judgment on it. This intellectual compass almost always guides him in the right direction, but he will also complement his instincts with deep analysis to ensure the quality of his work.”