HomeMorin is Enriching Nashua From the Roots Up

Morin is Enriching Nashua From the Roots Up

Andrew Morin’s connection with the land dates back to his Nashua childhood, when his father set up a small farm stand for him to operate as a means of encouraging him to eat his vegetables. His great-grandparents had purchased property at what was then a large farm at the edge of town.

Today, Morin’s West Hollis Street law office in Nashua is in the house his great-uncle built for his grandmother.

A sole practitioner with a focus on estate planning, Morin is also executive director of the ReGenerative Roots Association, a Nashua nonprofit devoted to sustainable agriculture, education, youth development and community events.

He’s all about enriching what’s around him — whether it’s the soil, the community, or individuals seeking legal advice.

“I really feel I can add value to clients’ lives,” he says of his estate law practice.

While still attending Nashua High, Morin participated in a summer program about the law at Brown University, planting the seed that a later legal career “could be an option,” Morin recalls.

But post-graduation found him enrolled in business school at the University of New Hampshire, where he received a business administration degree in the hopes of achieving financial success.

He worked briefly at two investment firms after graduation, and opened and managed a painting company, A & K Painting LLC, before the tug of law school prevailed.

He enrolled at Suffolk University Law School, graduating in 2011.

Morin worked briefly at Marcotte Law Firm in Lowell, Massachusetts before starting up a solo practice in his home town of Nashua.

Meanwhile, thoughts of starting a nonprofit — something he had dreamed about even while in law school — started dominating his thoughts.

Thus, he launched the ReGenerative Roots Association five years ago, and started on a path toward creating a community farm, encouraging agricultural studies in local high schools and 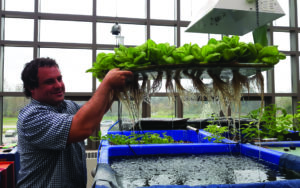 giving young, would-be farmers a boost in pursuit of their goals.

Morin estimates he now spends about 20 hours a week at his legal practice and 30 working for ReGen Roots, as he abbreviates the nonprofit.

But there is crossover.

Morin says much of the project management at ReGen Roots depends on the kind of critical analytical thinking he learned in law school, and that same background helped with securing a conservation easement on the Sullivan Farm, Nashua’s last operating farm, where ReGen Roots utilizes about two acres. Writing skills he learned in law school also help with grant writing for the nonprofit, he says.

His efforts are paying off, as ReGen Roots is growing — literally.

In the community garden ReGen Roots operates at Sullivan Farm, families —many of them immigrants working toward self-sufficiency — grow their own produce, with the understanding that 10 percent of their harvest must be donated to a local food pantry.

Over the past two years, participating families have grown more than 5,000 pounds of produce for their own consumption, “and they have the ability to interact with their neighbors” as they work, Morin says.

For the past three years, ReGen Roots has also sponsored a summer internship program for local high school students, who can now receive two credits while learning about growing vegetables, hydroponics, bee-keeping, community-supported agriculture and more.

Kylie Braunius, who signed up to be an intern in 2016 and worked on both the community garden and a school garden, calls Morin “the heartbeat” of the program.

“As a friend, he has inspired me to love the earth, to laugh hard, and to be patient,” she says. “I have come to appreciate the incredible kind of beauty that comes from the rewards of harvest.

“As a mentor, Andrew is hard-working and incredibly open to being wrong and learning new things. These qualities have allowed him and our team to make so many improvements to our agricultural efforts in just a few years.”

Morin himself assists at meetings of the Green Club, an after-school student organization at Nashua High North which has repaired an old greenhouse on campus and started a raised-bed garden that produced food for both students and local food pantries.

Noting that Sullivan Farm is running out of room for further agricultural enterprises, Morin says ReGen Roots is now looking for a parcel of at least one acre in or around the Nashua area for purchase or long-term lease, and he is hoping his Bar colleagues or others might have suggestions.

“We want to set up a place to use as a community farm for generations to come,” he explains.

It’s the kind of ambition that has inspired Morin’s best friend since the age of 15, Anthony McMullen, who runs an insurance and investment company and is also director of communications for ReGen Roots.

“He has a great work ethic,” McMullen says of Morin. “Where we are in the world today and how to impact change is something we’ve talked openly about. He’s a close friend. But a mentor, too.”

Morin’s love of the earth extends to a love of the White Mountains, “one of my favorite places,” where he has climbed roughly 10 of the 4,000-footers in the range.

He also writes poetry, and is planning to finish a chap book of 70 original poems next year.

“It’s a way for me to refine my thoughts and add positively to the world, to make people think critically beyond our narrow lives when it comes to material capitalism,” he says.