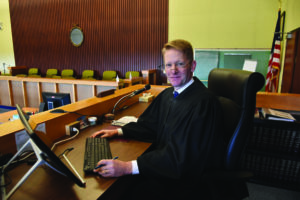 Up until the 1980s, some judges in the Granite State practiced part time and received no formal training. Some weren’t even lawyers.

Fast forward to 2021 and most New Hampshire Circuit Court and Superior Court judges are lawyers, preside fulltime, and undergo weeks of training.

Starting in late August new judges in the New Hampshire Circuit and Superior courts began participating in six-week judicial trainings that include judge shadowing and hours of classroom work before being allowed to don the robe.

New Hampshire’s Circuit Court— handling over 125,000 criminal and civil cases a year—is where the majority of judges in the state preside.

The circuit court includes District, Family, and Probate divisions, in various locations within 10 Circuits—one for each of the state’s counties.

One of the new judges who went through the six-week training program for the circuit court is Judge Ellen Joseph.

Joseph, who practiced family law for close to 30 years before being nominated as a judge, says she reached the point where she thought her experience, training, and knowledge could be put to good use.

“I knew the court was in need of judges,” she says.  “I thought it would be a good opportunity for me— as I think about someday retiring as well—and that I could do some service.”

The backlog of cases in the Circuit ourt stands around 4,200 due to the pandemic. One of the big differences between the various branches of the Judicial Branch is the volume of cases, says Circuit Court Administrative Judge David King.

The Circuit Court is currently authorized by statute to have 45 judges and the actual number, as of mid-September, was 31 full time judges. King says that number will likely reach 39 judges for the start of 2022, but that 24 judges will have less than five years of experience.

“The good news is that we’ve got as close to a full bench as we’ve ever had, but new judges aren’t as efficient as judges who are retiring,” King says.  “But it’s a good problem to have. We’ve been training the judges and they’ll be up to speed as quickly as they can get some experience under their belts.”

Judge Joseph trained with three others and started in mid-April. Trainings ran five days a week, for six weeks, at the Administrative Office of the Courts in Concord.

She participated in round table discussions with other judges and clerks, where she says she learned of many informal tips, “do’s and dont’s,” and had a chance to hear other judges stories.

“That was a critical part of the training for me because it provided insight to the job,” she says.

Along with textbook and theoretical teachings on substantive aspects of the law Joseph also had a chance to shadow other judges as part of her training.

“We went up to Claremont to watch Judge Yazinski and to a variety of other courts. I tried to get as much exposure to various personalities and styles as I could,” she says.

Beginning in March, 2020, the circuit court came up with a “plan to triage” because of court closures at the time, Judge King says.

“So, it’s not as bad as it sounds, but it’s still a big number to get scheduled,” he says.

In close to two thirds of cases there is no backlog in the Circuit Court but there are numerous case types involving children, landlord tenant, or incarcerated individuals that can’t be delayed for statutory reasons, and this is where the backlog exists, Judge King says.

“My goal is to eliminate whatever backlog we have by the end of calendar year 2022, and hopefully sooner than that,” King says.

Judge Joseph has been presiding over family law cases two days a week, that start at 8 a.m. and end at 3 p.m. She says her case load is heavy, but that the days go by fast.

And sitting on the bench, she continues, has been a learning experience.

“For thirty years as an attorney I was used to being the one to give the information and present the case as I viewed it,” she says.  “It has taken me a little while to learn not to ask questions, to listen more than to talk. And it goes without saying, to be open minded and to hear both sides before deciding the matter.”

“I plunged right into a full calendar of duties as soon as my last shadow week concluded,” he says. “On my first day – August 23–I started a criminal jury trial.  I’ve had a bench or jury trial in nearly every week since then.”

Will—whose criminal practice background was limited—says he tried to learn as much as possible about criminal procedure and pretrial issues in his training.

“It was very helpful to watch judges preside over cases and to begin to learn different ways to handle the wide variety of proceedings that occur in the Superior Court,” Judge Will says

Her job during the trainings, she says, was to make sure those in training received the skills that are necessary to handle a number of complicated cases.

“The training covers legal writing, plea hearings, and jury instructions for civil and criminal cases, as well as everything they need to know about contempt powers, civil process, jury selection, and law clerk protocol,” she says.

As for Judge Will, he has found there are some things that only first hand experience can teach.

“From the standpoint of being a brand-new judge facing a steep learning curve, I found it reassuring to see how judges’ approaches to different problems vary, and to learn that even seasoned judges need to take a recess from time to time to figure out the right way to approach a particular situation.”