When Governor Sununu’s state of emergency went into effect five months ago because of the pandemic, NH law firms had to ask important questions, such as: How to keep people safe and how to provide quality services for their clients?

Firms have learned a lot in five months about how to answer these questions effectively.

While some firms have already increased their in-office staffing, others continue to keep people at home. And others, while maintaining safety protocols, haven’t changed much.

Ted Lothstein, of Lothstein and Guerriero, runs a two-person criminal defense firm with his partner Richard Guerriero. Their firm, which has offices in Keene and Concord, never fully closed their offices.

“We never shared a room and don’t have the problems that the big firms have with large groups of people in the office,” Lothstein says. “We’re not sharing bathrooms and don’t have an elevator or narrow staircases so we’ve had no problems with social distancing.”

According to Lothstein, during the last several months 80 to 90 percent of his firm’s meetings have been done with video conferencing.

When clients do come to the office, he explained, they enter the conference room from separate entrances and sit on opposite ends of a long table.

“It’s kind of like a Victorian couple dining with two people at each end of a very very long table,” Lothstein joked, adding that his firm set up the Concord office so that people can go straight to their conference room.

“Clients don’t need to go to the reception area and they’re required to wear masks” he says.

Lothstein also said his firm has tried to maintain their staffing levels but did lay off one person who returned to work recently.

On the other end of the spectrum, larger firms such as Sheehan Phinney has multiple offices in Manchester, Concord and Boston, and a staff of over 200 people.

“We were one of the early firms to go to work from home in the middle of March,” President and Managing Director David McGrath says, noting the important role his firm’s IT group has been playing since the beginning of the pandemic.

“We have a great IT group and they were talking about various scenarios even before the pandemic. One of things they were telling us was that we need to prepare in terms of security in order to be ready in the event that something catastrophic happens,” McGrath says. “The good news for us is that we were ready and able to work remotely quite easily.”

In June, some lawyers and a core group of essential non-lawyers came back to the office, according to McGrath.

“Density was less than 25 percent of what it normally is,” he says.  “But prior to allowing any one in, our facility team put together a safety protocol which is the same in our Boston office.”

Some of those protocols include a single-rider elevator, one-way traffic in hallways, mandatory masks, six feet of distance, daily screenings, temperature checks, and a restructuring of the staff kitchen.

After July 4, the number of staff at Sheehan Phinney increased to 50 percent or less.

“We are regularly monitoring all reliable info available to us,” McGrath says. “New Hampshire positive test rates are down while other states are seeing troubling numbers. Were those rates not what they are now, or if they were to change, we’d change our plans.” 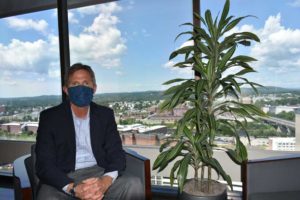 One of the things McGrath said he’s learned from this experience is that he doesn’t want to work from home every day and that he does foresee remote work increasing in the future.

“Working remotely one or two days can be productive so I think there’s going to be increased remote work post Covid and it won’t be short lived,” McGrath says, stressing that there’s, “no good substitute for in-person collaboration in a cohesive organization like a law firm.”

“I like to say we’re serving our clients from our 80 offices in Northern New England with our staff and lawyers using their homes as offices,” he says.

The danger of contracting coronavirus, according to Noonan, is still where it was four months ago and he has yet to be convinced of a need for his employees to return to their offices.

“If anyone could explain to me the difference between now and four months ago, I’d be happy to listen,” he says. “But, as far as I understand it, there’s no vaccine and there’s no cure, and nothing has really changed.”

Noonan said the remote environment is working and, like McGrath, he credits his IT director.

“Things are working, so what’s the point in putting people at risk even if it’s a smaller risk? We just want to keep people safe,” he says. “The hardest part for me and everyone is not seeing people. But people have been very flexible and and accommodating. We’ve always been family friendly and people have to be sensitive to our clients needs.”

Shaheen and Gordon has not had any layoffs and is currently in the process of hiring attorneys.

“The bottom line is you have to take care of your people and until someone convinces me that it’s safe to put all those people back in one place, we’re not going to do it,” he says.

Executive Director and CEO of McLane Middleton, Cathleen Schmidt, said her firm never completely shut down and maintains close to 20 colleagues on site to handle the business operations of the firm. She also credits the firm’s IT specialist and the combination of Zoom video conferencing and the use of laptops, as keys to their success.

With 230 colleagues and five offices in New Hampshire and Massachusetts, McLane Middleton has worked hard to maintain safety and serve it’s clients effectively. One of the ways this has been done, according to Schmidt, has been the creation of multiple webinars on a variety of topics that have served 1000’s of people.

“Webinars are a great vehicle to give back to community and the profession,” Schmidt says.

While McLane Middleton nstituted a hiring freeze in March, they have recently started hiring again and expect more new hires to come.

Since Memorial Day, Schmidt said, requests from people wanting to return to the office began to grow.

“It’s more convenient without the distractions of working at home,” she says, adding that about one third of the staff is back in office. “The doors are still closed to the public but we’re seeing clients on a one-on-one basis and we’ve really gone above and beyond to keep everyone safe.”

McLane Middleton has not had a case of Covid-19 at their firm and Schmidt says they are “working hard to maintain ‘physical distance.’”

“We think it’s important for people to stay in touch and to be in contact with each other so it’s not ‘social distance.’”

Like other firms, Schmidt said her firm is paying close attention to the advice coming from the CDC and other regulatory authorities, but, as of now, they have not chosen a specific date for having all employees back in the office.

“I think this will change how we do business. We were worried back in March that certain practice areas like trust and estates might suffer but that area has been booming,” she says, explaining the “innovative” drive-in-signings program her firm established to meet the needs of their clients.