During two out of the four times Paul McEachern ran for governor of New Hampshire, he steadfastly refused to take the pledge of no new taxes. He felt the total reliance on property taxes 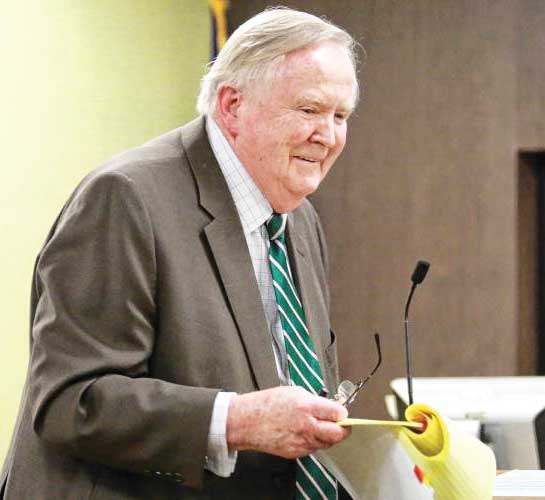 was an unfair tax system and that it really amounted to an income tax in disguise. “Our homes don’t earn money so we have to pay our property taxes from our income,” he said during his 2004 campaign.

Paul, who died on August 18 at 82, acknowledged that running for governor without taking the pledge was not a logical decision. “It’s an emotional decision,” he admitted. “We’re pitting town against town again. It’s the lowest common denominator of a democracy when government preys on those least able to respond. It makes the entire educational funding system a farce.”

Paul’s tireless effort to create a more equitable tax system in New Hampshire will be one of his many legacies.

For me, however, making me into the lawyer I became will be his legacy. In 1989, I was a law school graduate from the University of Dayton who canvassed the state of New Hampshire with my resume because I desperately wanted to move to this beautiful and pristine state. I received a call from Shaines & McEachern in Portsmouth inviting me to interview. I don’t know why I got the job, but I am eternally grateful to Paul McEachern and Robert Shaines for taking a chance on me.

Paul took me under his wing and taught me that putting your heart and soul in whatever you do makes you the best person you can be. He had a strong devotion to the law, always guiding me to the statutes and the case law as my guide.

Seven months after I arrived in New Hampshire, I successfully passed the bar and was admitted to the New Hampshire Bar. I went to the swearing-in ceremony in Concord and upon my return I was greeted at the door by Paul and one of our clients, who handed me a bouquet of 12 red roses.

Paul had me working on the rose-bearing client’s case, doing research and drafting the complaint that we were going to file on his behalf. I had put Paul’s name as the attorney and he told me to revise that to make me the attorney now that I’d been sworn in. It was the greatest honor and signal of his confidence in me I could have ever received as a new attorney.

That case went all the way to the Federal Court of Appeals and we won. I remember the advice Paul gave me as I was about to leave for the appellate argument in Boston. “Be sure to pour your glass of water before you start your argument, otherwise you will likely spill it in the middle of the argument.” That was such sage advice that I’ve followed it everywhere I go and have never cried over spilt water.

During the eight years I practiced at Shaines & McEachern, Paul and I had many opportunities to drive to Concord for hearings and meetings. We devised a game to make the trip just a little more interesting. He’d purchased a new Ford Taurus that had a thermometer which measured the outside temperature. That was a newfangled feature in cars back then. We would each guess what the temperature was going to be in Concord or wherever we went. At first he won every time. He knew the various elements that affected New Hampshire climate. Over time I learned his tricks and began to win the game on occasion. He never let me back down from the challenge.

I learned from Paul that being a lawyer was a sacred trust. No matter what kind of case we were working on it always involved a real person who had put their trust in the law and hoped that the lawyers they hired earned that trust. It was not about money. It was about justice.

Paul encouraged my work in the areas of civil rights for the LGBT community and on behalf of survivors of domestic violence. Paul and his partners willingly put the muscle of the firm behind the pro bono work I did on those causes. I could never have helped pass legislation to protect the LGBT community from discrimination or obtained a conditional pardon for June Briand from the governor if I hadn’t been mentored and trained by Paul McEachern.