HomeRemembering the Spanish Flu of 1918 and the...

By Misty Griffith and Scott Merrill

As the COVID-19 pandemic drags into the fall, many Americans have altered their daily lives in ways that may have seemed unimaginable last March. For those who lived through the summer and 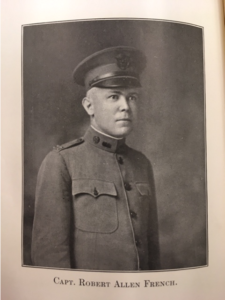 fall of 1918, similar uncertainties and changes were in the air. That was the year the Spanish flu pandemic caused over 670,000 deaths in the U.S. and over 2,700 deaths in New Hampshire.

The Spanish flu, or “pestilence,” as it was sometimes called at the time, infected up to as many as 500 million people worldwide. The origins of the flu are still unknown, according to the National Center for Biotechnology Information, but likely began in the U.S. in March of 1918.

The so-called “Spanish” flu was given that name, not because it originated in Spain, but because during World War I, neutral Spain was the only country in Europe that was covering the influenza crisis. U.S. newspapers were encouraged to downplay the virus so as not to negatively impact morale during the war.

The Spanish Flu pandemic occurred in three waves in the United States. The first wave was in the spring of 1918 followed by a significant abatement of cases during the summer months. The second, and far deadliest wave, occurred from September to early November 1918, followed by a lesser wave during the winter of 1919.

The Spanish flu was unusual in that many of the deaths were among previously healthy 25-35 year-olds. In New Hampshire, the legal community lost several of its young members in the fall of 1918.

The 1919 Proceedings of the NH Bar Association has three obituaries for young attorneys that mention the flu:

Byron Champlin’s September 2018 article in the Concord Monitor titled “Concord and the Great Influenza of 1918,” mentions the death of Judge A. Chester Clark, 41, of the Concord Municipal Court. He died Sept. 23 after a week’s illness. Clark was a highly regarded jurist, active in state political and civic organizations.

“He was a good judge. Let there be no mistake on this point,” editorialized the Manchester Union newspaper. “A Democrat, and named for office by a Democratic governor, he made so clean a 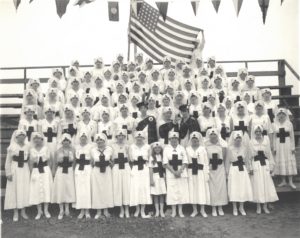 record, made his judgement such a model of industry, probity and impartial and energetic law enforcement, that a Republican governor continued him in office.”

In 1920, then Bar President Leslie Snow, made the following statement regarding the flu pandemic and the court system in the NH Bar Association proceedings:

“It is simply our good fortune that we have not had a recurrence of the situation which existed a few years since; when by reason of illness the burden of work of the whole court was, for a long period, thrown upon two or three members. In the ordinary cycle of events, this may reasonably be expected to recur.” 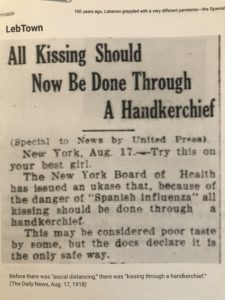 The New York Health Commissioner Royal S. Copeland responded to the threat of “Spanish” influenza reaching the United States with the prediction that “there is nothing to be alarmed about so far as I can see,” according to The Sun in New York, on August 17, 1918. He also encouraged citizens to avoid kissing if they could, but that if they must kiss, a handkerchief should be worn. These comments led to sarcastic newspaper headlines across the country, such as “Want to Kiss and Escape Grip? Use Handkerchief!” published in the Indianapolis Star, in August of 1918.

While parallels exist between the responses to the Spanish Flu and COVID-19, for New Hampshire’s legal community, social and technological changes have occurred over the past 100 years that would have been hard to understand for those attorneys mourning the loss of friends and struggling to maintain justice at that time.

Snow, after all, could not have imagined the 2020 courts’ ability to hold remote hearings, drive-through filings, remote notarizations, and socially distant pilot juries in air-conditioned courtrooms.

He certainly would have been confused, and perhaps dismayed, to learn about the meaning of “zoom fatigue.”

The Bar News would like to document and preserve the legal community’s experiences during the current pandemic for future generations. We are currently accepting (400-600 word) articles or personal reflection pieces focusing on the ways the pandemic and its effects on the economy have shaped your daily life, created new opportunities and/or altered the way you practice law. We will include these reflections in a Bar News section beginning in October. For more information contact smerrill@nhbar.org.