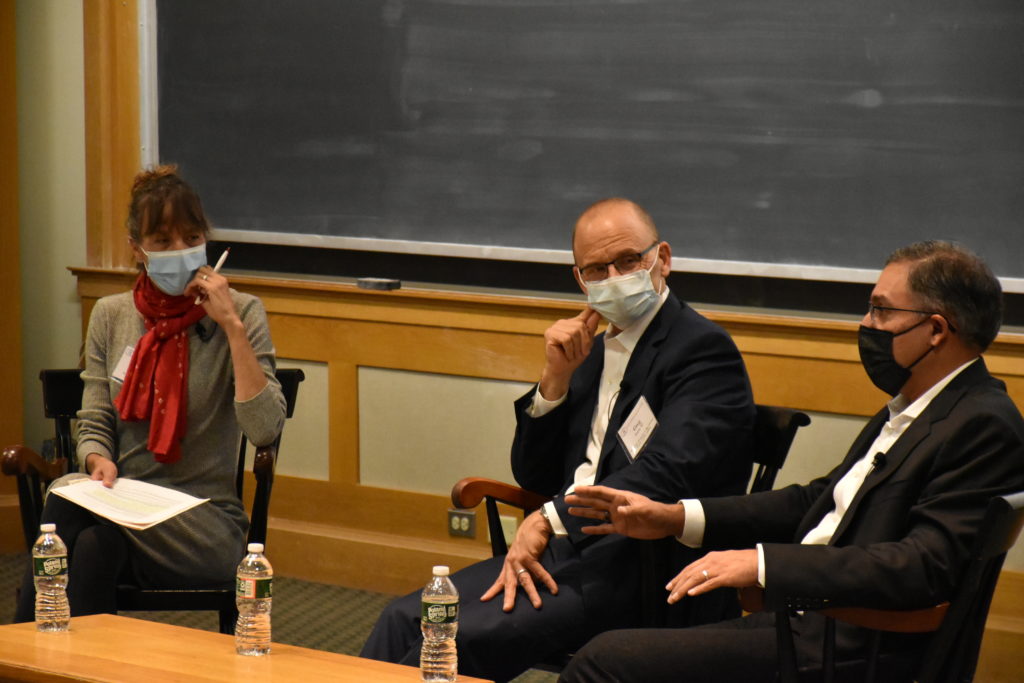 Neal Katyal (right) who served as Solicitor General from 2010-2011, responds during a discussion at Dartmouth College to a question from former NHPR radio host Laura Knoy about the Mississippi abortion case that will be heard by the Supreme Court on Dec. 1. Gregory Garre, who served as Solicitor General from 2008-2009, is in the center of the photograph. Photo/Scott Merrill

Former U.S. Solicitors General, Gregory Garre and Neal Katyal, were at Dartmouth College on the evening of October 22 where they discussed the role of the courts in a democratic society as well as the so-called culture war cases involving abortion, guns, and affirmative action the Supreme Court faces in coming months.

The event, Restoring Trust in Democracy: The Role of Courts, was moderated by Laura Knoy, former host of New Hampshire Public Radio’s The Exchange.

Knoy started the night off in front of a full auditorium in Filene Hall by asking Garre and Kaytal what they believe the Court’s role is in “these troubled times,” where a widespread lack of trust exists in the political system, the media, and amongst the general population.

“Greg and I come at this from the tradition of the rule of law and there is something different between law and politics,” Katyal said. “You can vehemently disagree politically, but still come to the same result legally. And the Supreme Court at its best is that… it’s Chief Justice Roberts ruling to uphold the Affordable Care Act in 2012 at a time when he had to have known it would be hard for President Obama to win reelection, but he still voted to uphold it.”

Garre said the Court serves as a model for civil discourse that can help repair breaches in trust.

“I think in a broad sense you can think of the Court as the ultimate guardian of our nation’s laws, ideals, and principals,” he said. “The dialogue they’re having amongst themselves can be a lesson to all of us in terms of civil discourse. Having said all that, the Court has a lot to do to keep its own institution working and the onus on some of this should fall on the other political branches. I really do think we’ve seen an uptick in the rhetoric on the Supreme Court coming out of congress and from the President that is having a real damaging effect.”

One of the first big questions of the evening regarding a specific case coming up for the Court was directed to Katyal, who was asked what it would mean if Roe v. Wade were to be overturned.

Roe v. Wade was decided in 1973, with a 7-2 vote in the supreme court, and secured a “right to privacy” under the 14th amendment and a woman’s choice whether to have an abortion.

In May, the Supreme Court agreed to consider whether state laws that ban abortions before fetal viability are unconstitutional. The test case was brought by Mississippi, which has a state law banning abortions after 15 weeks of pregnancy, and the case is set to be heard in December.

Kaytal pointed out that seven of the nine justices in Roe v. Wade were Republican, before he turned his remarks to the two abortion cases out of Mississippi and Texas challenging Roe that will soon be before the Court.

The recently passed law in Texas restricts abortion after six weeks and deputizes private citizens to enforce the law.

The Mississippi case, Kaytal said, is requesting the Court overrule Roe v. Wade and will be heard December 1st, while the Texas case is currently mired in procedural issues.

“They don’t want to overrule Roe v. Wade, particularly right before a midterm. The Mississippi case might allow them to dance around it and say, ‘well we’re not going to overrule Roe but we’re going to uphold the Mississippi law,’” Katyal said. “But the Texas law is impossible. You can’t write around that problem. So, they may just delay the Texas case for a while.”

The last time Roe v. Wade was in danger was 1992, when the Supreme Court took up the case of Planned Parenthood v. Casey, a Pennsylvania case focused on how and when a state may regulate abortion. At the time, abortion rights advocates feared the court would overturn Roe.

“In that case a trio of three conservative justices, Justices O’Connor, Souter, and Kennedy came together and said, ‘this decision is too important, social expectations have crystalized around this decision, and we can’t overrule it. It would undermine the legitimacy of the court,’” Kaytal said. “l do think even if they want to overrule Roe, that kind of thinking is going to make it hard—not impossible—but I do think Roe is on very, very thin ice. And I do think it may influence the timing of when Roe is overruled.”

Lewis said the discussion emphasized in a clear way the challenges faced by the country and the Supreme Court over the next year.

“It was a good high-level discussion that focused on the role of civility. It was one of the best I’ve seen.” he said. “The Supreme Court has a big challenge over the next year to make sure the rule of law isn’t undermined by allowing ideologies to predominate.”

The event was presented by The Rockefeller Center at Dartmouth College, the Warren B. Rudman Center at the UNH Franklin Pierce School of Law, and the New Hampshire Institute for Civics Education.