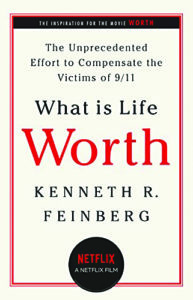 What is Life Worth: The Unprecendented Attempt to Compensate the Victims of 9/11 Kenneth R. Feinberg Public Affairs Paperback, 240 pages

When books are made into movies, there’s often a flurry of new paperbacks that show up in bookstores and online. Newly-branded covers remind shoppers that the book they’re holding was the inspiration for the movie. And as with all adaptations, the producers tend to take a fair amount of dramatic license.

I usually read the book before I see the film, but this wasn’t the case with Ken Feinberg’s, What is Life Worth, originally published in 2005 and republished in 2021.

Feinberg’s book was one of the guiding sources for the film, Worth, which aired on Netflix in September. I’d stumbled upon the film two months ago and as I watched it, I found myself emotionally drawn back to 9/11. The next day, I picked up the book.

What is Life Worth is the account of Feinberg’s three-year struggle to compensate the victims of the 9/11 attacks 20 years ago. And like most books made into movies, it has its share of embellishments.

For instance, the movie has a scene where Feinberg meets with senators Ted Kennedy and Chuck Hagel on Sept. 22, 2001 to discuss how the fund should work. The movie makes it seem as though they’d sought Feinberg out because of work he’d done on other high-profile mediations as well as the Agent Orange settlements in the 1980s. The reality, according to Feinberg, is that he called Hagel himself and by Sept. 22, 2001, the Air Transportation Safety and System Stabilization Act—the bill that established the Victim’s Compensation Fund—had already been worked out in Congress.

As I was reading What is Life Worth—trying and failing to get Michael Keaton’s image out of my head, just as I do when I think of Fight Club and Brad Pitt—I grew more and more interested in the ethical question the title of the book raises and how Feinberg handled what seemed to me to be an impossible job: confronting  thousands of grieving family members of 9/11 and determining the right ‘value’ for their loved ones lives.

Should the value of a life ever be reduced to money, and if so, who should decide? The first question may seem simple. Yes, the value of a life can be reduced to money and Feinberg is the one, in this case, who had to decide. But in his telling, he displays both a pragmatic and a deeply empathetic response to these types of questions. In fact, What is Life Worth could be seen as a confession, a coming-of-age story, and a straightforward first-hand account of historical events and legal realities all rolled into one.

At times Feinberg reveals his shortcomings when dealing with individuals, such as the time at a town hall meeting when he told a group of grieving family members that “this is the only real game in town.”

“With a sinking feeling I realized what I had said. The room practically erupted in anger. One outraged wife spoke for the group. ‘To you this may be a game,’ she spat. ‘But not to us.’ Heads nodded around the room. What could I do? I apologized profusely and inwardly vowed to never, ever use that kind of language again. I never did.”

Compensating victims, Feinberg makes clear, is an everyday occurrence in courtrooms across the country. It’s a question the law provides clear answers to in terms based on a person’s compensation, assets, as well as pain and suffering.  It is justice determined by a formula that seeks to deliver fairness, even if it can never actually make up for the loss a person has suffered. But given the magnitude of 9/11 and Feinberg’s discretion to determine the ultimate amount of the awards, the question of getting it right and avoiding political and social upheaval was crucial. And this is where the reality of the hour-to-hour feel of the book outstrips the movie’s ability to clarify important details and the ethical questions that Feinberg and his partners dealt with every day for over two years.

There is a scene in Worth where Keaton reveals the formula for determining the compensation the victims’ families will receive. But as the book points out, this was laid out in the statute ahead of time and discretion was given to him as Special Master to narrow the gap between the high-end and low-end awards.

“Although the statute prohibited me from awarding the same amount to all claimants, Congress had protected itself by conferring undefined discretion on a Special Master. This discretion became my talisman.”

It was Senator Kennedy, Feinberg says, who provided him some thoughtful advice regarding this role.

“‘Ken, just make sure that 15 percent of the families don’t receive 85 percent of the taxpayer’s money.’ Pure economic loss calculations might call for the family of a Cantor Fitzgerald bond trader or Keefe Bruyette banker to receive double digit millions from the fund, even after deductions, but I would reduce such awards.”

The movie seems to have taken the number 85 and made it appear that without 85 percent of the eligible pool coming into the fund, the fund would be viewed as a defeat or a disaster. But Feinberg makes clear this wasn’t the case. And in the end, 97 percent of all eligible families that lost a loved one came into the fund voluntarily. Only 94 people, 3 percent, decided to litigate, and those who did settled in later years.

If you’ve seen the movie and find yourself looking for an authentic depiction of how the VCF was administered—and what the emotional toll was for those involved—you should read What is Life Worth. I thought Keaton played Feinberg well—a little heavy on the Brockton, Mass. accent notwithstanding—and the movie, overall, does a decent job telling his story. But accounts like this deserve to be heard from the source and without the drama.

Kenneth Feinberg, one of the nation’s leading experts in alternative dispute resolution, will be speaking at the NHBA’s Mid Year Meeting on February 18, 2022.