HomeSaying Goodbye to a True Hero

Saying Goodbye to a True Hero

We have all had heroes, and, often, they disappoint. No matter how talented and prolific, their own humanity constantly fights to keep them, well, human. And yet we go back to the hero well over and over. Why? For me, and I suspect for most, it is in search of something more than just what our heroes do to make them heroic to us. It is the optimism and hope that the skill that makes them heroic roots in something deeper in their person – that they have character that approaches their accomplishments. One online source defines “hero” as “a person who is admired or idealized for courage, outstanding achievements, or noble qualities.” The definition uses “or,” but we desperately want it to be “and,” which is where we get into hero trouble. We crave for our heroes to have outstanding achievements and noble qualities, and they routinely let us down.

Writing for Psychology Today, Dr. Saul Levine explains that, as young children, our parents usually serve as our first role models, and (mercifully I might add) that it takes years for us to see them as people with frailties – I would say about 20 years, based on my present experience of twentysomething children happily reminding me of my frailties. Later, Dr. Levine explains, children become drawn to other figures who assume hero status to them, frequently athletes, but also musicians (I’ve only just recently stopped my listening binge in the wake of Eddie Van Halen’s passing), Hollywood types, and the like.  While Levine acknowledges that some adults continue to admire heroes from their youth, more shift to admiring scientists, writers, inventors, and those who make significant and real contributions to society.  Some childhood heroes, though, make significant and real contributions to society, which brings me to a profound sadness I felt at the news of Gale Sayers’ passing in September. 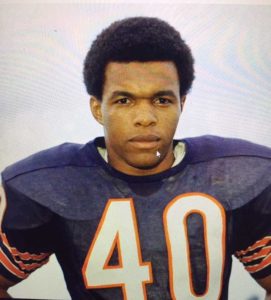 Gale Sayers, running back for the Chicago Bears from 1965-1971, died in September.

I grew up in suburban Chicago, home of “Da Bears,” within whose ranks Gale Sayers occupied hallowed ground.  He was an NFL rookie a year before I was born, and his career was over by the time I was 8. Most of his athletic accomplishments occurred before I knew what a football was, but, among a storage container of accolades, he was the youngest ever to be inducted into the Pro Football Hall of Fame and the highlight reels bore that out. That was enough to stir the passion of any kid, much less this skinny French horn player trying to navigate the daunting worlds of elementary and middle school.

You couldn’t live in Chicago in the ‘70s without knowing about Gale Sayers. In what is now an unimaginable era of just three television channels, it seemed like every Sunday’s pre-game included, at some point, an NFL Film with a booming narrator replaying the Kansas Comet’s greatest hits. A lot of that was lost on me, until, around age 9 or 10, I came across Sayers’ autobiography, I Am Third (a worthy read even today), and, of course, the oft-rebroadcast television movie Brian’s Song. Now it is true that the Brian Piccolo story was tailor made for a Hollywood production and to put stars in the eyes of a 10- year-old-boy, and it is also true that some people view it as cliché. But stay with me here.

In the early days of Sayers’ career, the Bears remained segregated when traveling to away games, meaning black and white players shared hotel rooms with only those of their perceived race. At the Bears players’ request, the team changed the policy and set road trip rooming assignments by position. Only one other player occupied Sayers’ position – running back – and so Sayers began to room with his backup, a white player named Brian Piccolo, Sayers’ direct competition on the team.  They became close personal friends. Piccolo – who often played in Sayers’ shadow – spent countless hours rehabilitating Sayers after his first knee injury, literally working against his chances of becoming a starter. Sayers devoted himself to the care of his unlikely friend a short time later, when cancer slowly consumed Piccolo at age 26.

Sayers’ book became a best seller in the early `70s, and the television movie Brian’s Song was repeatedly rebroadcast throughout that decade, a time not generally considered among our nation’s best in terms of race relations. Piccolo’s daughter Lori, eulogizing Sayers in the Washington Post, observed that “[t]hey roomed and bonded together during the civil rights movement and so much social upheaval in the late 1960s. I look at their relationship now and think how much we could learn from them.” These heroics fully eclipsed anything Sayers could do on a football field.

From his lofty perch as one of the greatest football players in history, Sayers understood that true heroism is measured in something other than one’s achievements and statistics. On the occasion of his induction into the Pro Football Hall of Fame, he said: “God gave me a great gift and I had a lot of help developing for this occasion. Reaching this point, however, is not as important as striving to get here.  This is true in all professions and all of life’s activities. There are doctors, lawyers, schoolteachers, plumbers all who strive to do their very best with their abilities.” He concluded, “I hope that when we look back 25 years from now, we can see this not as a zenith of our accomplishments but as a milestone in a life of striving for excellence, striving for even more distant goals.”

Through those words, in an astonishing measure of humility, Sayers descended to ordinary status – just a guy who strives – and in an equally astonishing measure of grace, raised up anyone who also strives onto his hero pedestal. Sayers pulled the notion of heroism away from some impossible and ultimately disappointing ideal to a simple formula common to us all, and something within all of our own individual control. To the extent any of us, doctors, lawyers, schoolteachers, plumbers, strives to do our very best with our abilities, we are heroes to anyone who is looking, and we can find heroes if we are looking. As a kid in the Chicago suburbs, I had no idea about any of this.  As an adult I feel lucky to have continued to learn from a childhood hero who didn’t let me down.  RIP number 40.