“Tooling Up”  for a “Tsunami” of Cases 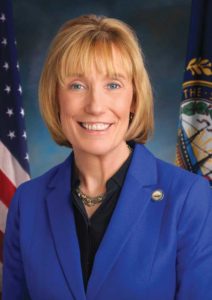 While the pandemic fuels Great Depression levels of unemployment and protestors take to the streets calling for justice after the murder of George Floyd in Minneapolis on Memorial Day, the legal aid community in New Hampshire is as committed as ever to providing equal justice and systemic change for the poor.

“We are, indeed, in times that are unprecedented,” Senator Maggie Hassan said, speaking to a group of over 40 political leaders and members of the legal services community on June 4th.

“My mother, who is quite a grammarian, always tells me not to overuse certain words and I’ve been trying to think of words that are different than ‘unprecedented’ to describe these times,” Hassan said, “and I just can’t.”

The lunch meeting, held on Zoom, hosted by Ovide Lamontagne, the Chairman of the Campaign for Legal Services, was held to provide updates about the legal services community’s successes and concerns as they move forward during the pandemic.

Hassan reminded the group that their “voices have never been more important than they are right now.”

“One of the things that always makes me proud of our state as a citizen and as a lawyer, and a member of the NH Bar, is the depth of commitment for providing legal services to all Granite Staters. You do an extraordinary job elevating the issues and helping average people understand why legal services are so important and I’m incredibly grateful to you all for that.”

Before turning the meeting over to those in the legal services community, Hassan expressed sadness and a resolve for justice regarding the events that have been unfolding over the past three months – most recently the murder of George Floyd by the hands of police in Minneapolis.

“Frankly, if any of you had told me that I would have been part of an impeachment trial and then a pandemic and now what we’re seeing after the murder of George Floyd, I would have told you that that conflict could never have happened but it has and here we are.”

George Floyd’s murder, the deaths of Ahmed Aubrey, Breonna Taylor, and other African Americans, has created a spark that, Hassan said, “continues to shock the conscience, but makes clear that our commitment as attorneys and citizens to equal justice under the law is more important than it has ever been.”

“We need to be able to speak about systemic racism in our criminal justice system and to do more than talk about it and study it, we need to act on it.”

One of the things Hassan said she’s working on with colleagues in Washington is addressing police misconduct by introducing action items such as a national standard for the abuse of force.

“This could help us take concrete steps towards improving criminal justice for all in our country,” Hassan said, adding that “I will continue to raise my voice when I see any leader in this country abusing their power. That is what I believe happened Monday night when the president unleashed rubber bullets and tear gas on peaceful protestors.”

Before concluding her remarks, Hassan told the group she is confident that the country will emerge “better and stronger, and more just and equitable.”

“I get to hear about and witness a daily kindness that Granite Staters show to each other, I see the resilience of young people finishing their graduations, I watch young people starting charities and then I get to have calls like this one with folks like all of you who I know are working so hard to make sure the needs and the interests of people all around our state are tended to.”

Lamontagne told those in attendance that the state is “at the doorstep of a surge” in evictions, foreclosures, and domestic violence cases in the courts, and that the legal services community is calling on all of its resources, including lawyers and business people from around the state, to put together a team to address these issues.

“I think it goes without saying that supporting access to justice and legal services is a non-partisan effort,” Lamontagne said, acknowledging Hassan’s support. “The fact that you and I are teamed up on this effort, despite whatever political differences we may have had in the past, cuts across the state because we have Republicans, Democrats, Libertarians and vegetarians all supporting the effort. It’s important during these trying times to come together and certainly law and order, peace and justice, and access to justice are all issues that we’re unified by.”

Erin Jasina, Domestic Violence Project Director for New Hampshire Legal Assistance (NHLA), said that when the pandemic began there was “concern that victims of domestic violence would still be residing in their homes with their abusers. Cut off from access.”

“Safe times for leaving home, like trips to the grocery store or bringing kids to school, were no longer available. And people couldn’t access court houses between normal business hours.”

Because of this restricted access, the courts convened a working group of the Coalition, NHLA, court staff, and private attorneys.

“Collectively, we developed a process for safely filing domestic violence and stalking petitions electronically,” Jasina said. “We needed a solution that would allow victims of sexual violence and stalking to access critical services and for filing protective orders without compromising own health or court staff.”

The plan went into action last week. Now, between the hours of 8-3, domestic violence victims connected with a crisis center or the Strafford County Family Justice Center, can file domestic violence and stalking petitions electronically.

“They can be in a safe location and they can access that protection without having to go to a courthouse without risking exposure to themselves or others,” Jasina said. “It’s a really great opportunity to access the protections they desperately need while also maintaining their health and we’re very excited that process is in place and we’re grateful for all of those who came to the table in a very short period of time.”

While Jasina said they have seen a decline in referrals and that this was not unexpected due to stay-at-home orders. Recently, she added, as restrictions are being lifted, NHLA is seeing an increase in the number of referrals, although is “not anywhere close to numbers prior to pandemic.”

“But, we do expect to see those numbers in referrals increase significantly as restrictions are lifted even further. We’ll see an influx of protective order requests, we’ll see an increase for divorce and parenting assistance. And now we’re trying to turn an eye to see how we can meet that need because we know it will be overwhelming. We would love to be able to represent everyone referred to NHLA for assistance, but, that need far exceeds the resources that we have. As you know many victims will go unrepresented in their protective order and family law cases.”

At the Legal Advice and Referral Center (LARC), Steve McGilvary said he has fielded a number of questions recently from clients who are receiving letters from landlords threatening evictions for non-payment.

“The landlords are telling our clients what non-payment of rent is doing to them. And they’re saying that as soon as they’re able, as soon as the moratorium lifts, they are going to start proceedings to evict them.”

Clients are calling in, McGilvary said, “not with a written eviction notice yet, but with an oral threat or text from a landlord that their days are numbered.”

“These are clients who have lost jobs and some aren’t coming back. They feel hopeless and want to know what to do. We’re telling these folks that if they’re behind in rent they can go to a local welfare office for support. We’re in collaboration with NHLA and NH Pro Bono Referral Program and we’ve all agreed in our meetings over the last couple of weeks that we’re waiting for the tsunami to hit and we’re trying to prepare.”

Sarah Mattson Duston, Executive Director for New Hampshire Legal Assistance (NHLA), said 40 percent of NHLA’s funding comes through the Judicial Council and IOLTA Grants through the NH Bar Foundation. Both of those funding sources are vulnerable, she said, due to a decline during the economic downturn.

“We are very grateful to the Bar Foundation for its efforts to maintain level funding for civil legal aid during the next year. That support helps us plan effectively for the surge in need that is already upon us. We will advocate for continuation of state funding as well – now more than ever, we need to make sure that low-income people can stay safe, housed, and financially stable.”

Breckie Hayes-Snow, Director of LARC, said she’s also grateful for the support LARC receives from NHLA and the NH Bar Association’s Pro Bono Referral Program to meet the needs that have arisen over the past several months.

LARC is planning to hire another attorney with CARES act money to address employment and housing related issues.

“We are building an integrated system to provide a full range of services in collaboration with NHLA and with the volunteers through the Bar Association who give so much of their time through the pro bono program,” she said, adding “We’re hoping to be completely tooled up for the surge in the next couple of weeks.”