Expressions of Unity and Sadness from the New Hampshire Legal Community

On the morning of Sept. 11, 2001, many members of New Hampshire’s legal community headed to work thinking it was just another day.

But some events in history happen suddenly and become etched in the collective consciousness of a generation. Because of their momentousness, they create an uncanny ability for people to recall precisely where they were and what they were feeling at the time.

Sept. 11, 2001 is now one of those days for those in the legal community who rememember the timeline of events as they unfolded on radios and televisions across the Granite State.

As the facts of that day became clear—nearly 3000 dead and over 6000 injured in an attack by Islamic extremists— the initial shock turned to fear, anger, confusion, and for some, a call to action.

Despite a sense of helplessness, there was a moment—maybe it was a few weeks, maybe a year—when the United States felt united following the Sept., 2001 attacks in New York, Pennsylvania and Washington D.C.

For New Hampshire attorney Kenneth “Ken” Bouchard, who died in 2017 after a long battle with young-onset Alzheimer’s Disease, being united after the attacks meant rising to the challenge of doing what he could to help those who were directly affected.

In the Oct. 5, 2001, Bar News, Bouchard, like others who had been glued to their televisions around the state, said the attacks left him feeling helpless.

At the time he asked himself: “What can I do?”

“We can’t all go to Washington or New York to volunteer. We can’t make contact with the families of the many missing, lost, injured and deceased,” Bouchard said in 2001.

What people could do, he envisioned, was to help those in need in a visible way.

For Bouchard, who grew up in a family of seven that often struggled to make ends meet, the events of Sept. 11, 2001, hit close to home. Years earlier, Ken had been in a long-term relationship with a woman, Paige Farley-Hackel, who was on one of the planes from Boston that crashed into the towers. The pair had remained friends, and Ken was also friendly with Farley’s mother, according to his widow Brenda Bouchard.

“His friendship with Paige was a big impetus to starting the United We Stand campaign,” Ms. Bouchard, said.

With the help of his wife, his law partner Paul Kleinman, and others, a grassroots nonprofit organization called United We Stand, Inc. was created whose purpose was to sell patriotic buttons and decals.

Proceeds from the buttons, which sold for $2.00, as well as the decals, were sent to the Red Cross disaster relief fund which benefited survivors of the attacks.

Kleinman said the idea for United We Stand was Ken’s, noting that Ken would sell the buttons and decals at his daughter’s travel-soccer events which made up a good portion of the proceeds that were donated. Additional donations were also made by lawyers in the Bar and their clients.

“United We Stand was Ken’s brainstorm. He was always such a great idea guy and always an innovator,” Kleinman said. “He’d developed software for our firm to make things more efficient back then. He was my mentor, and always had ideas when it came to handling cases.” 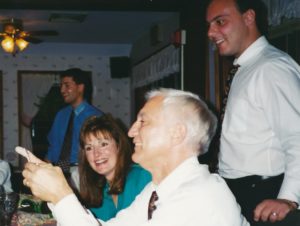 NHBA Photo
Ken Bouchard, (center), at an office-staff party in the early 1990’s. Paul Kleinman stands behind him. Courtesy Photo

Kleinman said he isn’t sure the United We Stand campaign would be possible today given the political and cultural polarization that took place in the ensuing years.

“I wonder if something like that today would be turned around in some manner,” Kleinman said. “When we put it together though, it felt genuine. It wasn’t turned into an ‘us-versus-them’ thing.”

According to Ms. Bouchard, the campaign was something that came naturally for Ken.

“He [Ken] lived the lesson his mother taught him throughout his life, whether it was through philanthropic donations, helping family, friends and neighbors with legal and other matters that were easy to resolve for him but overwhelming to them, spending the day plowing elderly neighbors’ driveways in the winter, and everything in between,” she said.

At the time of the attacks, Kleinman and others at his firm were in their Hampton, N.H. office, and he remembers going to a local restaurant to watch the events unfold on a television.

“It was a scary time and it also brought people together. Ken felt very strongly about the cause and the idea of standing together. Everyone felt a feeling of hopelessness and the question at the time was what can you do to help out?”

‘Lets go do what we do best’

New Hampshire Bar Association President at the time of the attacks, Peter Hutchins, compares what happened on Sept. 11, 2001 to other world changing events, like Pearl Harbor, the Great Depression, or the current pandemic.

Hutchins, 43 years old in 2001, was working at the Manchester firm of Hall and Stewart.

“We heard it on the radio and we actually did have a TV that got Channel 9,” he said. “What I remember is everything just shutting down, and people were scared. You didn’t know if there were going to be more attacks.”

Hutchins says he realized quickly that he needed to address Bar members. The question, he recalls asking himself, was, ‘How does this relate to our profession?’

“It was hard to figure out what to say at the time because in those early days it was triage, with first responders working in New York and a lot of attention being paid to those who were killed,” he said. “At the time I asked myself, ‘How could a bunch of lawyers in New Hampshire respond to this?’ And I said, ‘Maybe we just carry on and do what we do.’

Hutchin’s column in the Oct. 5 Bar News described his struggle to come to terms with the events of the attacks before he offers the wisdom of a phrase he’d picked up while refereeing high school basketball games.

“How should I feel? What should I do? Should I be doing anything as Bar president? Are lawyers even relevant to this, and if so, how?  I’m 43 years old, smoke too much, have no military training and have been trying tort cases in New Hampshire courts for the last 18 years,” he wrote in the Oct. 5 column.

Eventually a phrase that officials would say before leaving the locker room came to him: “Let’s go do what we do best.”

Hutchin’s column reminds attorneys that what they do best is fighting for their client’s liberties and freedoms, and “striving for respect.”

“That day really brought an awareness that we could be attacked in our own country,” he said. “I think we have gained a better appreciation for first responders and veterans over the past 20 years.”

While Hutchins, Bouchard and Kleinman were watching their televisions the morning of Sept. 11, the New Hampshire Supreme Court justices were sitting in what is now known as the Souter Room holding a case conference.

At one point, according to Justice John Broderick, the justices were notified the World Trade Center had been hit by a plane.

“It didn’t sound like a terrorist attack, and one of the justices left to get more intelligence. I think it was Dalianis. And then she came back reporting it had been a very large plane. And then the images started coming on the television which were very alarming.”

Broderick, like others that day, says he didn’t have a sense that the towers would collapse.

“We suspended the conference and a short time afterwards myself and others left for home. The television showed the towers had come down,” he said. “It was twenty years ago but it feels like a week ago. That day, those images, had the same impact on me as the Kennedy Assassination. It was one of those moments that’s imbedded.”

Joanne Hinnendael, the New Hampshire Bar Association’s  CLE coordinator at the time, says she learned what was happening in New York while driving to work from Henniker.

By the time she reached the Bar Center, Hinnendael said the staff were all watching events unfold on television.

“When I saw the first tower collapse, I walked away crying, knowing that those buildings hold tens of thousands of people and that many could be killed,” she said, adding that bar staff eventually gathered in front of the building that on Pleasant Street at the time.

“We formed a circle and just expressed our grief.  Some prayed, others just cried. It really brought us all together and we came together as a family that day. Well, we were always a family, but that made us stronger.”