Two years in the making, a proposed amendment to the state’s professional conduct rule for attorneys had a rare hearing in front of the New Hampshire Supreme Court on April 12.

Nearly 20 female attorneys attended to show their support for the amendment to Rule 8.4(g), and many shared personal experiences with harassment and discrimination on the job. 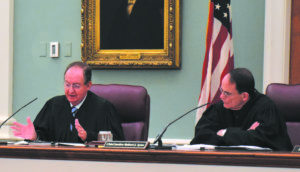 She shared a recent example: when she was talking to a male attorney over the phone, he told her, “The way you argue turns me on.”

“The anger, embarrassment, and shame I felt in that moment …” LaRochelle recalled. “This is not something that happened 25 years ago. … I’m not the only one this is happening to.”

Attorney Sara Greene, representing the NH Supreme Court Attorney Discipline Office, came to the hearing with a proposal to amend Rule 4.4 rather than 8.4 as a compromise. Rule 4.4, Respect for Rights of Third Persons, says: “In representing a client, a lawyer shall not take any action if the lawyer knows or it is obvious that the action has the primary purpose to embarrass, delay or burden a third person.”

The ADO’s office also opposed the amendment when the proposal came up for a public hearing in front of the Advisory Committee on Rules last year.

In her case, a single instance of harassment “had a profound effect,” Ferrari said, and Rule 4.4 (a) wouldn’t cover it — “[This] goes well beyond embarrassment, delay or burden…”

Members of the Ethics Committee have said that when New Hampshire adopted the ABA’s model rules in 1986, language prohibiting action prejudicial to the administration of justice — a phrase that came to include harassment and discrimination — was not approved.

Attorney Rolf Goodwin leads the Ethics Committee’s efforts and said the journey to have the amendment reach the Supreme Court had already included compromises on both sides.

“It’s been a unique approach and I think a very beneficial, healthy approach,” he said.

Indeed, there were fewer opponents than at previous hearings although the testimony was no less fervent.

“I’m opposed to the rule because it’s unconstitutional and it’s a bad idea,” said Michael Tierney, of the Catholic Lawyers Guild of New Hampshire.

Fred Potter, of the faith-based JustLaw NH firm, acknowledged that the concerns presented by the female attorneys were “horrible” but described the amendment as a social experiment.

In an email to the NHWBA following the hearing, Ferrari said she was “proud and moved” by members’ testimony.

“To those who testified in person and so bravely shared your experiences, I know that it was not easy to put yourself out there on a personal level, but the raising of your voice up against inequality was an example to all and I believe it made a difference, regardless of the outcome of the Proposed Rule,” she wrote.

The last time the state’s highest court held a public hearing on a rule change was 2014. In addition to the testimony in April, 27 comments were submitted to the Supreme Court. Their decision is forthcoming.