Ralph A. Barbagallo, Jr. Finds Balance in Life as a Lawyer and a Musician

It’s not every New Hampshire practitioner who has rubbed elbows with the likes of former Massachusetts Attorney General (and later US Senator), Edward Brooke, actresses Blythe Danner and Rue McClanahan, and rock-and-roll legend Chuck Berry, but Ralph A. Barbagallo Jr. is not your average lawyer.

The attorney-cum-musician has maintained dual careers most of his adult life, callings which have taken him to such disparate locales as the Massachusetts Supreme Court and the Hampton Beach Casino Ballroom. 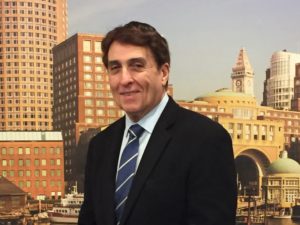 A personal injury lawyer with principal offices in North Andover, MA and Salem, NH, Barbagallo is also the man behind the Rico Barr Band, which performs at a variety of venues throughout the region, offering “jazz standards, the American songbook, and Marvin Gaye to Steely Dan,” as Barbagallo puts it.

A native of Lawrence, MA, he was the first in his family to attend college, graduating from St. Anselm’s before going on to the Boston University School of Law.

He was also an early music aficionado, learning accordion as a boy because, “every Italian mother wants her son to play the accordion,” he jokes. But another instrument soon won his allegiance. His uncle was a drummer, and Barbagallo remembers going to visit him at his grandmother’s house and he “looked at this big bass drum and it was love at first sight.”

That uncle became his first percussion teacher, and he then studied privately with Joe Morello, the famed American jazz drummer who served as drummer for pianist, Dave Brubeck.

While still in high school, Barbagallo played drums for Ted Herbert, a well-known bandleader from the big band era, and stayed with his band off and on for three or four years. “A lot of the guys (in the band) went on to Woody Herman’s band,” he recalls. “I went on to law school. I never regretted it.”

During his years in law school, Barbagallo interned for then-Attorney General, Edward Brooke, later to become the first black politician from MA to serve in Congress. When Barbagallo mounted an unsuccessful run for State Representative in the 1970s, Brooke came to Lawrence to campaign for him. “He was quite a guy,” Barbagallo says.

After law school, he continued working full-time as a musician, doing legal work in his spare time. “Then it morphed into full-time,” he remembers. For 15 years, he had a general law practice in the areas of real estate, divorce, personal injury, and civil and criminal work, then started focusing on personal injury cases in 1983. Winning a half-million-dollar case for a construction worker who had been injured in Seabrook helped decide that direction, he says.

Though he has collaborated with other lawyers on some cases, Barbagallo has always had his own firm. “I had a political friend who worked for the Department of Labor, and I walked into his office and saw all these cubicles and I said, ‘I’ll sell pencils before I do something like that,’” he explains. “I like my freedom.”

One of his most memorable cases was Commonwealth v. Chretien, in which he represented a man who had been accused of raping his estranged wife, and which went all the way to the MA Supreme Court. Though he lost – the court ruled that the victim being the spouse of the defendant was no bar to a conviction of rape – it was a landmark case because it marked the first time a man was prosecuted for raping his wife, Barbagallo says.

His legal work has won the admiration of fellow attorneys like Mark Stevens, a criminal defense lawyer with offices in NH and MA. When Stevens was opening an office in Salem, NH, Barbagallo called him and offered advice about getting the business started, “and he’s been a great resource ever since,” says Stevens, who has referred personal injury clients to Barbagallo.

“I always get good feedback about him,” Stevens says. “I do listen to his music, too.”

Barbagallo has also been active in a number of Bar-related, political and civic organizations. He was President of the Rockingham County Bar Association twice, a Governor of the New Hampshire Trial Lawyers Association, serves on the Board of Directors of the Hampton, NH Chamber of Commerce, and has served on charter commissions in both Lawrence and North Andover, MA.

He belongs to the Italian American service organization, UNICO, and is a past Director of the Citizens League for Adult Special Services (CLASS), the Merrimack Valley Philharmonic Orchestra, the International Institute, and other philanthropic groups. 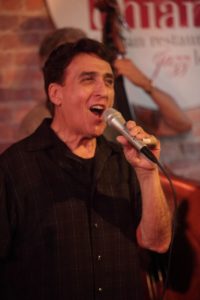 But most of his out-of-the-office time is devoted to his other love: music. He is the “Rico” of the Rico Barr Band, a take-off on the name of Beatles’ drummer, Ringo – and is the band’s lead vocalist, with a smooth, dateless voice that can easily move from Bobby Darin to Elton John to Motown covers. Depending on the event and venue, he either appears as part of a duet, a trio, or a full band with up to eight or nine members, calling itself the Rico Barr Band featuring the JJR (Jump ‘n’ Jive Review) Horns. He has also written some 300 original songs.

“He can sound like Sinatra, like Tony Bennett, like Steve Lawrence,” says Boston radio personality, Ron Della Chiesa, the voice of WCRB’s Boston Symphony Orchestra broadcasts and the host of Radio Station 99.1’s, “Strictly Sinatra,” for which Barbagallo wrote the theme song. “He’s one of the singers from the Italian school; he knows that repertoire cold.”

“I never knew when I met him that he was a lawyer,” Della Chiesa adds. “I just thought he was a fantastic musician who really knew how to get an audience going. I can just imagine what he’s like in a courtroom.”

Chuck Rolecek, owner of CR’s Restaurant in Hampton and former owner of C.R. Sparks in Bedford, has known Barbagallo for some 30 years, since he heard him perform at a wedding and asked him to play at his restaurant venue.

“He’s got a great voice and he’s a heck of a drummer,” says Rolecek. “At CR’s, he gets a really great following. He’s really good at ‘50s and ‘60s crooners like Frank Sinatra, Bobby Darin, Dean Martin, and Tom Jones, but he also sings and plays with a keyboard player. He’s a true professional. He gets here on time, he sets up well in advance, he interacts well with the guests, and he plays requests. I truly love working with him.”

One of Barbagallo’s favorite performance anecdotes dates back to the 1960s, when his band was playing back-up for Chuck Berry, the pioneer rock-and-roll singer and guitarist, and Berry was late for the performance. About an hour into the show, “the crowd was getting restless,” Barbagallo recalls, when Berry finally showed up and demanded payment before he would appear. He would not take a check, and promoters had to scramble to find enough cash for the payment.

“Then he took the time to count every dollar and put it in his guitar case before he would come on stage,” Barbagallo says. “All I heard from that moment was screaming… He probably got burned so many times he had to make sure he got paid before he got on stage.”

Barbagallo also used to play drums at the Hampton Playhouse for musicals like “South Pacific” and “Music Man,” and appeared – sort of – in a 2016 Disney movie called, “The Finest Hours,” with Chris Pine and Casey Affleck. He is in a nightclub scene, but the rhythm section is hidden by taller players in front, so he is little more than a shadow.

During his years at the Hampton Playhouse, he also met and worked with Blythe Danner (aka Gwyneth Paltrow’s mother) and Rue McClanahan of “Golden Girls” fame. The Rico Barr Band has appeared at venues ranging from the Cape Cod Jazz Festival to the Peabody Essex Museum to the Manchester Jazz and Blues Festival to Swinging Under the Stars at Faneuil Hall, and Barbagallo says he is especially looking forward to playing at a “Rat Pack Night” at a barge concert in Boston this summer.

The father of two grown children and grandfather of one, he lives in North Andover, MA with his wife and office manager, Marie.

“Two of the best moves I ever made were getting admitted in NH and focusing on personal injury law,” he says of his professional life. “The third thing was having an outside interest. It doesn’t have to be music. People get burned out. I think having outside interests makes you better at everything you do because you’re fresh all the time and it makes for a long career. I learned that lesson, about work-life balance, a long time ago.”