The Institute for Justice: Patrick Jaicomo 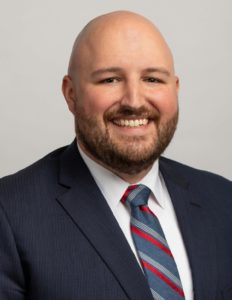 Patrick Jaicomo, an attorney at the Institute for Justice in Arlington, Virginia, says he has found a sense of purpose holding government employees—including police— accountable for their crimes, and dismantling the current doctrine known as qualified immunity.

Jaicomo, whose background includes a clerkship on the Michigan Supreme Court and six years spent practicing civil litigation for a mid-sized law firm, is one of the leaders on the Institute for Justice’s Project on Immunity and Accountability.

In his two years at the IJ, Jaicomo has litigated accountability issues—including qualified immunity and the restriction of constitutional claims against federal workers—across the country and at every level of the federal court system.

His story, he says, is a common one for many attorneys.

While his decision to go to law school was largely driven by concerns about government overreach and the importance of enforcing the constitution, these passions and ideals were placed on hold in the pursuit of making money.

“But you lose site of the things that inspired you to go to law school in the first place,” he says. “One day, I realized that working at a law firm—it was fine—but I didn’t have a sense of purpose that was being provided by my profession.”

While at that firm Jaicomo maintained his connections to the civil rights issues he felt passionately about through a side practice and he eventually made these his purpose.

“The only thing I was really focused on was making money as a lawyer and I decided I would rather find purpose in the work I was doing as a lawyer,” he says. “That’s ultimately why I joined the Institute for Justice. Every single day now I’m doing exactly what I hoped I’d be doing when I went to law school.”

The services provided by the IJ are done pro bono and litigation involves identifying constitutional violations and remedying them.

“The last two years have been like a shot,” Jaicomo says.  “We’ve gone from zero to 60 on this project with a case in the Supreme Court, and others across the country we’re litigating.”

Patrick Jaicomo will be speaking at the NHBA’s Midyear Meeting on February 18. The title of his talk is The Past, Present, and Future of Qualified Immunity.