The Joy of Taxes

For some recent immigrants to the United States April 15th is likely just another day of the year. Until, that is, they meet Barbara Heggie. For Heggie, the Coordinator of New Hampshire’s low-income taxpayer project, every day is a tax day. 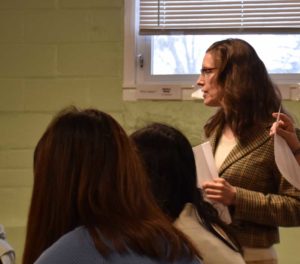 For the past seven years Heggie has worked on the Low-Income Taxpayer Project representing clients facing a variety of tax related problems including deficiency notices, levies and liens, audits, spouse relief, and earned income credit problems.

On February 4th, Heggie began a three day series of classes at the International Institute of New England in Manchester as part of a low-income tax clinic. The IINE provides opportunities for refugees and immigrants to succeed through resettlement, education, career advancement and pathways to citizenship.

Over 30 people, including interpreters from eight countries around the world, filled a large basement ESL classroom at the IINE waiting for Heggie to begin her lesson. Naomi Keenan, an ESL teacher at IINE was pleased to see so many people in attendance and explained that most people don’t realize how intimidating starting over can be.

“They get here and they have to start all over,” Keenan said. “It feels good to help people. I want to make people’s lives more viable and welcoming and education is a way of empowerment.”

Heggie’s lesson covered six basic points that she explained slowly, pausing often to allow interpreters the time to communicate with students. She covered: why taxes exist, payroll taxes, state and federal tax systems, how to pay taxes for self employed individuals and employee payroll taxes, tax amounts, and refunds and credits.

Tax systems around the world can be very different from the United States’ system and many recent immigrants have a difficult time navigating the complexities of the IRS. One of the things that often surprises immigrants Heggie said, is the self employment tax.

“Most people don’t realize it’s fifteen percent of their net income,” she said. “This isn’t just immigrants. People must be disciplined about keeping track of what they owe or they can ‘shoot themselves in the foot.’”

Heggie encouraged her students to pay attention to the self employment tax by singing a song she wrote that is reminiscent of the school house rock PSA’s of the 1980’s.

“Don’t you know, it’s pay as you go,” she sang, as nearly all of her students joined in.

According to Heggie, legislators have chosen to invest in low-income tax clinics because there are large numbers of people who need assistance and because it’s “easier to fund tax clinics than to overhaul tax codes.”

In terms of immigrants, or “residents born abroad,” as they are referred to in a 2016 New American Economy report, New Hampshire had 78,118 residents born outside of the U.S, or 6 percent of the population, in 2014. Of those, 5,508 were self-employed. Overall, the report concluded that immigrants make up a significant percentage of tax revenue and spending power in New Hampshire with $170 million coming from state and local taxes and $598 million in federal taxes.

One of the translators at Heggie’s class was Neema Meliara, who moved to the U.S. in 2008 from Tanzania.  Meliara was translating English to a group of Swahili speakers.

“I enjoy helping people,” Meliara said, explaining her confusion and her sense of feeling welcomed when she first arrived. “When everything is new people need to see understanding, and to feel comfortable and safe.”

Jaesula Fontaine, 34, was at the tax clinic February 4th. Fontaine, a recent immigrant from Haiti, said she knew nothing about taxes before coming to the class. “I learned a lot,” she said.”

Heggie explained that it is a “real joy” for her to help people who have come to the United States under challenging circumstances solve their problems.  She also volunteers Saturday mornings at Workplace Success in Concord providing tax advice.

“Yeah, Saturdays as well. Because I can never get enough tax prep time,” she quipped.

As of June 1, 2021, The Low-Income Taxpayer Project transferred from the New Hampshire Bar Association to 603 Legal Aid. If you have questions or need assistance, please call Barbara G. Heggie, Esq. at 603-224-3333.