The New Hampshire Supreme Court held oral arguments on the issue of school funding Thursday morning, moving into yet another chapter in the state’s school funding saga.

The Claremont decisions of the 1990’s ruled that the state was required to provide an adequate education for its students.

The cost of the state’s base contribution per student is currently $3636 dollars, an amount laid out by the legislature following a 2005 lawsuit by the town of Londonderry, Merrimack and 19 other towns.

Thursday’s hearings, which focused on the cost of transportation, facilities and teacher benefits, are the result of a lawsuit filed in Cheshire Superior Court in 2019 by the Contoocook Valley School 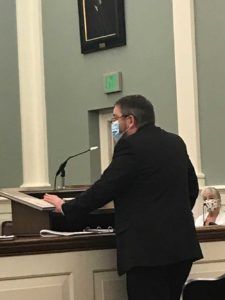 District and three other towns in southwest New Hampshire.

Arguing for Contoocook Valley, Mascenic, Winchester, and Monadnock school districts, attorney Michael Tierney told the court the state is currently not meeting its constitutional obligation to provide an adequate education for its students.

“What we ask of the court is that the court issue a specific injunction prohibiting the governor and the commissioner from underfunding the petitioning school districts, and make sure they receive the full $9,929,” said Tierney.

“It is undisputed that these districts cannot provide a constitutionally adequate education with the funding being provided by the state. The judiciary has the responsibility to ensure that constitutional rights are upheld.”

Solicitor General Dan Will, who argued for the state, referred to the Lilley case, which involved the question of whether the state was preventing an individual’s fundamental right of expression.

“In order to put the burden on the state to justify a limitation of a constitutional right you have to prove you’ve been deprived of it,” Will said. “In a case where a plaintiff wants to say ‘I can’t provide an adequate education on the amount provided by the state,’ the burden remains on the plaintiff to prove they can’t provide the adequate education on that base adequacy amount.”

One of the specific issues argued Thursday was the cost of transportation.

Justice Basset asked Tierney if he agreed with Will’s statement.

“I absolutely disagree,” Tierney said. “The legislature in the state determined that transportation is part of the cost.”

A study by the American Institutes for Research (AIR) was recently presented to the legislature’s Commission to Study School Funding. The report shows that the highest number of economically disadvantaged students spend less, on average, than districts with the fewest needy students.

The report also shows that communities with the least property wealth “impose the highest local education tax rates to be able to fund their children’s education.”

According to Attorney John Tobin, who litigated the Claremont school funding suits 20 years ago, it’s  too early to tell where the ConVal case will go.

“You never want to predict an outcome based solely on questions,” he said.