The NH Bar Association’s Welcomes Edward D. Philpot Jr. as President of the Board of Governors at Annual Meeting 2019 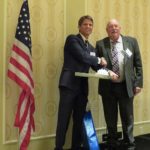 President’s gavel was passed from David W. McGrath of Sheehan Phinney Bass & Green PA, to Edward D. Philpot, Jr. a solo practitioner for 27 years and former Belknap County Bar President. McGrath thanked his law firm, Sheehan Phinney Bass & Green PA and his wife, Lorie McGrath, for their support of his year, where much time was spent in service to the Association. Philpot discussed how his term as President will focus on greater communication of NHBA member benefits and implementing more technology assistance services for members, as well as a greater focus on Law Related Education programming. 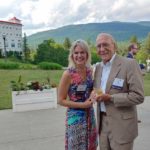 Association President, McGrath announced the long-time New Hampshire Bar Foundation Chair, Jack Middleton, of McLane Middleton PA, will be stepping down from the Board of Directors. Attorney Middleton received a standing ovation in recognition of his work with the Foundation. Middleton will be succeeded by James J. Tenn Jr., of Tenn and Tenn PA.

Attorney Jennifer A. Eber of Orr and Reno received the Distinguished Service to the Legal Profession Award for her work to update and prepare new content for Beyond High School, a publication of the NHBF and NHBA that provides valuable information to high school seniors regarding their rights and responsibilities entering adulthood. Attorney Eber thanked Mrs. Robin E. Knippers, the NHBA Law Related Education Coordinator for her help with the project. Their efforts distributed the book to approximately 14,000 students in the state.

Attorney William C. Saturley of Preti Flaherty firm, received the E. Donald Dufresne Award for Outstanding Professionalism. One former colleague noted that he has the highest respect for Bill’s diligence, professionalism and judgement in all matters, but particularly when dealing with other lawyer difficulties. Bill served with dedication on the Board of the New Hampshire Insurance Agency Inc. for many years.  Most recently, he volunteered to conduct the negotiations leading to the sale of the NHBA Insurance Agency to Amity Insurance Agency. 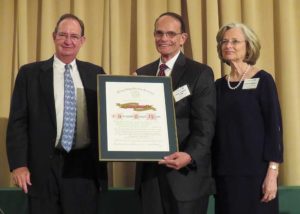 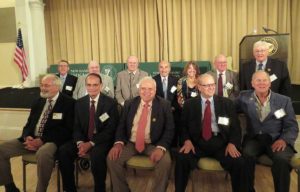 The Annual Meeting was a restorative weekend where over 130 New Hampshire Bar Association members and their families enjoyed comedy stylings of Juston McKinney, a hike up Mt. Pierce, and a relaxing Cog Railway climb up Mt. Washington. “We are looking forward to providing innovative and interesting programming at future meetings so as to foster occasions when bar members can get together and celebrate the special qualities of practicing in New Hampshire.”, New Hampshire Bar Association Executive Director, George Moore said about the meeting.