The Supreme Court of New Hampshire held oral arguments Wednesday morning to examine whether a list of over 250 police officers with credibility issues should be made public.

The Exculpatory Evidence Schedule, better known as the “Laurie list,” was created after the murder conviction of Carl Laurie was overturned in 1995. The case, State v. Laurie, has shaped the way prosecutors in the Granite State handle exculpatory impeachment evidence relating to police officers testifying in court.

After Laurie, such evidence was required to be turned over by prosecutors in court. 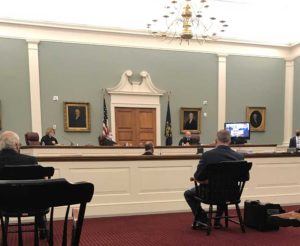 The NH Supreme Court hears oral arguments on the “Laurie list”
ACLU argues the list is not protected as a personnel file.

Wednesday’s oral arguments come after a public records case for the release of the list was filed in 2018 by the New Hampshire Center for Public Interest Journalism, Telegraph of Nashua, Union Leader Corporation, Newspapers of New England, Inc., through its New Hampshire properties, Seacoast Newspapers, Inc., Keene Publishing Corporation, and The American Civil Liberties Union of New Hampshire.

According to Bissonnette, one issue the court must now decide involves the state’s confidentiality law regarding a police officer’s personnel files. RSA 105:13:B, makes these files confidential unless they contain exculpatory evidence.

Bissonnette argued Wednesday that the “Laurie list” is not a personnel file. “I don’t think we’re talking about personnel issues at all. As we heard from the Department of Justice in its opening remarks the purpose of this list has no human resources function at all. It’s not designed to hire or terminate police officers. It’s designed to help prosecutors perform their constitutional obligations.”

Solicitor General Dan Will, arguing for the state, referred to the list as a tool for prosecutors “to do their best to discharge their obligations under Brady and Laurie. It is a list that has always been 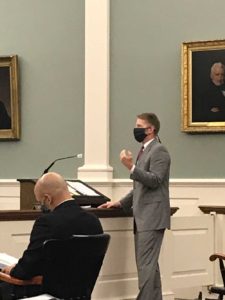 Solicitor General Dan Will, arguing for the state, as the NH Supreme Court hears oral arguments on the “Laurie list”.

He also argued there is a lack of uniformity regarding standards for how officers are placed on the list and how they are removed. “It’s either under inclusive or over inclusive. And as this court has recognized, this served as a basis for prosecutors to make a decision to do more digging to see whether exculpatory evidence exists.”

Justice Hicks expressed surprise over the length of the list and asked Will how accurate he believed it to be.

Even before 2004 when Attorney General Heed issued his memorandum, Will explained, the counties kept informal lists and in 2017 Attorney General Foster centralized county lists. Will also noted that that there is not a process in place to look at people who are deceased.

“You could argue it’s more accurate. But to your question, your honor, I don’t think anyone really knows. And that creates significant issues in terms of making a list like this public,” Will said. “As the Attorney General just recognized before the Governor’s law enforcement commission, the critically important objectives are for transparency and accountability for police misconduct. This list is not the tool for that, and it was never intended to be. It can’t serve that function in satisfactory way.”

Bissonnette and the other plaintiffs seeking to make the list public disagree.

“Defendants have to trust they’re getting everything they can and that the system is working well, Bissonnette said. “The way this is now there’s no way of knowing. With transparency there is the ability to at least verify what they’re getting they’re entitled to.”

Justice Hantz Marconi asked Bissonnette what the general public interest is in knowing that a police officer has an unspecified credibility problem.

Bissonnette responded by referring to the Laurie list, as Will did, as a tool for prosecutors but he also sees it as a way of protecting the rights of criminal defendants and citizens in general.

“The answer is twofold your honor. And the first is for the ability of taxpayers to know that officers they’re paying for with their dollars have these types of issues. If you’re confronted with an officer who has been accused of misconduct you should be able to know this.”