Former Gov. Stephen Merrill, who served as the state’s 77th governor, passed away Saturday. He was 74. 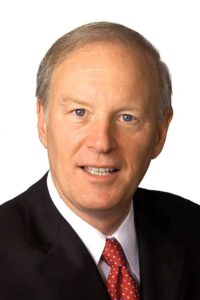 “With regret, we share the news with the State of New Hampshire, that former Attorney General and Governor Stephen Merrill passed away peacefully at his home with his family today. Additional information about remembrance services will be forthcoming. We ask that you please respect the privacy of our family at this difficult time.”

Governor Chris Sununu directed all flags on public buildings and grounds in the State of New Hampshire to fly at half-staff, effective immediately.

“Governor Steve Merrill was a dear friend who had an incredibly positive impact on the citizens of our state.  He will be missed by everyone who knew him,” Sununu said.

Merrill served under Gov. John H. Sununu and was the state’s Attorney General before being elected Governor in 1992, serving two terms. He is known for being the first elected official to coin the phrase, “The New Hampshire Advantage.”

As word spread throughout political circles there was an outpouring of admiration and fond memories from associates and former colleagues across social media, including some of the following:

NH GOP: “We are deeply saddened by the passing of former NH Governor Steve Merrill, whose dedication to New Hampshire was exemplified through his public service as our state’s Attorney General and our 77th Governor. Our thoughts and prayers are with the Merrill family at this time.”

Kelly Ayotte, former U.S. Senator and NH Attorney General: “So sad about the passing of my friend & mentor Governor Steve Merrill. NH has lost one of our best, a great leader & extraordinary person. I will miss Steve’s brilliance, his way with words and wonderful sense of humor. My thoughts & prayers are with Heather, Ian & Stephen.

Tom Rath: “Godspeed to Steve Merrill and condolences to his family. He was optimistic, upbeat, funny and loved people and they loved him back.”

NH Democratic Party Chair Ray Buckley: “Condolences to former First Lady Heather Merrill & family in the passing of former NH Gov Stephen Merrill. As a legislator I worked closely with him on several issues, he was always fair and kept his word. And nobody had a better smile than Steve Merrill.”

U.S. Sen. Jeanne Shaheen: “I was fortunate to have the opportunity to work with Steve when I served in the State Senate and he was Governor. When I succeeded him, Steve was a reliable confidant who offered insight and advice – one Governor to another.”