HomeTom Pancoast: A Small Town Lawyer with an...

Tom Pancoast: A Small Town Lawyer with an “Exacting” Mind

Thomas Pancoast may be the quintessential North Country lawyer – part legal advisor, part raconteur, and so can-do that he delivered one of his own daughters in the back seat of a 1971 Plymouth Fury.

He has maintained an office in his Littleton home for 41 years. He has almost no overhead, and no staff. He answers his own phone. 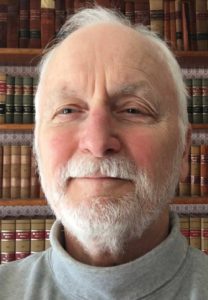 Meetings with clients – many of them repeat patrons or their children – often border on social events.

“I will oftentimes have clients come and they’ll ask my advice or shoot the bull about something that has nothing to do with the law,” says Pancoast, who recently turned 75. “I’m not much of an extrovert. I don’t really need to go anywhere, but I do find these client encounters substitutes for a social life in a way and it’s satisfying.”

But don’t let the aw-shucks demeanor fool you.

“His work as a small-town solo practitioner can easily go up against that of larger firms ‘down south,’” says 35-year friend and colleague Mark Russell, a partner in the Littleton firm Samaha Russell Hodgdon PA. “His unsurpassed curiosity and engagement compels Tom to peek under rocks that others might not think to turn over, ensuring that his clients are always well represented and protected from the unexpected.”

So exacting is Pancoast’s mind, adds Russell, that “he is the only person I know who insists upon, and knows how to properly place the dieresis in Coös,” the name of New Hampshire’s northernmost county.

A native of Ardsley in Westchester County, New York, Pancoast grew up in Florida but loved spending time in the 18th Century farmhouse his artist grandfather used as a summer place in Southbury, Connecticut.

“It had no utilities. It was a step back in time,” says Pancoast.

The place had such nostalgic appeal, he adds, “I resolved I wanted to live in rural New England.”

That opportunity came years later when he graduated from Vanderbilt University with a degree in electrical engineering, went on to Yale Law School to liberalize his education and decided to use his juris doctor to make a living even though “I never had any intention of being a lawyer.”

He and his first wife chose New Hampshire’s North Country to live out that ambition.

“We ended up looking at the White Mountains and Franconia Notch,” Pancoast recalls. “I thought, ‘those mountains ought to keep the city away for a while.’”

He worked for a small Littleton firm for a couple of years, then hung out his own shingle in 1973. He has a general practice, with concentrations in real estate, estate planning, business and home law.

Among his most memorable cases in those early years was one in which he himself was the plaintiff.

Soon after moving to Littleton, Pancoast bought a couple hundred acres in nearby Monroe, did an extensive title search, and purchased an additional six acres to give him more frontage.

He delighted in swinging by the property after he got out of court “to walk around on my land,” until one day he discovered a ramshackle cabin built on the land.

“I hop out of my car and this guy came out, Clyde Royce,” he remembers. “He was a mountain man, kind of filthy and ill-kempt, and he had about 10 dogs. He said he’d been told by the tax collector that nobody owned the land and I said I owned it and to get out.”

Pancoast ended up suing Royce and went to court on the appointed day, only to learn that the court had helped Royce file an appearance, “so I have a pro se defendant squatter,” he says.

Judge Cy Perkins called the two men into chambers, whereupon Royce said he had dragged the cabin down the road and it was no longer on the property.

“The gavel comes down and I won my case,” Pancoast says, adding that he suddenly felt “kind of out of my element.”

Perkins – “a big bear of a man but very fair” – loved hunting, and soon “Clyde Royce with four teeth in his head started having a conversation with the judge about deer hunting there,” says Pancoast.

Nevertheless, the cabin was gone and he had prevailed.

Three daughters – Jessica, MacLean and Alexandra — also came along during those early years of practice, the first two while Pancoast and his first wife were living in the tiny town of Easton outside of Littleton.

Pancoast delivered MacLean in the back seat of that Plymouth Fury halfway to the Littleton Hospital, and Alex was one of only two children born to Easton families in 1977 – the other being Olympic ski medalist Bode Miller.

“Alex is not the international rock star that Bode Miller is, but has done quite well for herself,” says her father.

Indeed. Alexandra is a graduate of Duke and Georgetown Law, is special counsel to the Manhattan law firm Milbank and lectures at Duke Law School.

Jessica graduated from Princeton and Boston University Law School, worked with Orr & Reno for a time and is now a staff member at CASA.

MacLean graduated from Harvard and received her M.D. and Ph.D. from the University of Pennsylvania, where she is a neuropathologist on the faculty of the medical school.

“They are my legacy and I am insufferably proud of them,” Pancoast says of his daughters.

He acknowledges that he was something of a workaholic during his early years as a practitioner – something he believes may have led to the dissolution of his first marriage.

“That episode caused me to change my focus and re-calibrate my life balance and so, ironically, divorce was a gift of sorts,” he says.

Pancoast’s father had worked in sales and management of radio stations all his life and in 1985, Pancoast built and operated the North Country’s first FM radio station, which he ran until 1993 and sold in 2000, all the while practicing law on the side.

When he returned to his legal career full-time, “I just kept it kind of limited and found I enjoyed it a lot more,” he says.

He has also found time for civic and professional engagement, and served on the Littleton Planning Board and school board; was a director of the Littleton Savings Bank, later the Saver’s Bank; and for 26 years served on the New Hampshire Board of Bar Examiners, grading the real estate question on the semi-annual bar exam.

Pancoast says much has changed in the practice of law over the past 50 years.

General practitioners like himself in the early 1970s “did everything,” he says. “You might have a divorce client in the morning, then go to court for a DWI, then somebody comes in in the afternoon with a personal injury or an assault.”

These days, some fields – like employment law – have become so specialized that “the progression is kind of narrowing the area I’m competent to deal with,” he adds.

Still, “After you do this 50 years, it really becomes part of who you are,” Pancoast says. “I recognize maybe it’s time to hang it up but I’m not sure I can do that because it becomes part of your identity.”

Colleagues say Pancoast has every reason to keep doing what he does so well.

“In addition to being Littleton neighbors, Tom and I interacted representing our clients in a variety of legal matters prior to my appointment to the Superior Court in 2002,” Vaughan says. “Tom is among the brightest, most competent, thorough lawyers I have had the privilege to work with during my years of practice.”

Pancoast says he has no immediate plans for closing shop – as long as he can keep practicing in the North Country and Littleton’s “very wholesome environment.”

“When I see people who cannot imagine leaving Manhattan, I think, ‘if you only knew,’” he says. “But I’m not going to tell them because I don’t want them coming here.”