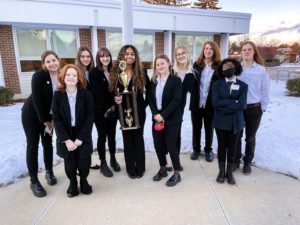 On April 22, 2022, Milford High School represented New Hampshire in the We the People National Finals in Washington, DC, via Zoom, where they placed 22nd out of 47 participating schools. They became State Champions during the State Finals back in January.

Although they were not crowned National Champions – California’s Amador Valley High School took that honor – Milford took home a prestigious Unit Award for Excellence. These awards are presented to each of the six units for strong demonstration of their knowledge pertaining to a particular subject. Milford’s presentation for voting laws, equality, and the Civil Rights Act earned them the award, which ranked that unit 12th in the nation.

In 1987, the Center for Civic Education developed the innovative program called, We the People: The Citizen and the Constitution (WTP). Brought to schools by the New Hampshire Bar Association, WTP is a nationally acclaimed civic education program that enhances students’ understanding of the Constitution and Bill of Rights and allows them to discover its contemporary relevance.

The program’s culminating activities are simulated congressional hearings where students evaluate, take, and defend positions on six units of constitutional law principles before a panel of judges, made up of NHBA members and other civics leaders in the community. District hearings occur in December of each year and the State Finals take place in January. The top performing class then earns the opportunity to represent NH in the National Finals in Washington, DC. 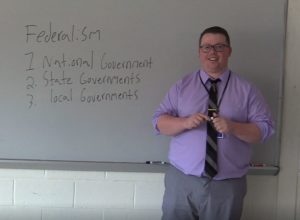 We the People teacher, Thomas Lundstedt, standing in front of his classroom explaining the types of government. Photo by Tom Jarvis/Bar News Team photo

Thomas Lundstedt, Milford’s teacher of the program, is an alum of both Milford High School and WTP. This is his first year of teaching.

“The students put in a lot of work leading up to the finals,” Lundstedt said. “Being a smaller class, we had to double up, so it was nice to see them rewarded for their efforts and to get a little validation for all the work they put in. They did a really good job.”

Lundstedt says being familiar with the program and how it works as a former WTP student gave him a little bit of an advantage. However, the advantage was mitigated by his class being smaller than the other schools, which means they had to work harder.

Despite not winning at the Nationals, Lundstedt was still very positive and beaming with pride for his students.

“I left on Sunday feeling very proud of their performances,” he says. “The class was a really smart bunch, so it was really cool to see them demonstrate their knowledge.”

Manya Ziemiecki, one of Lundstedt’s students said, “we were prepared but we knew that it was okay if we didn’t get into the top 12. It was a wonderful experience to have gotten that far.”

Ziemiecki says that in addition to going McGill to study voice in the fall, she also wants to study political science and potentially become an attorney like her father, doing civil defense.

“I don’t think I would have ever solidified that career path for myself without the We the People class,” says Ziemiecki. “It’s a really good class for students to learn the information [taught in the WTP class] because with everything that’s going on right now in the headlines, like the bomb that was just dropped with Roe v. Wade, I felt like I was less in the dark and understood more of what I was reading. The class provided the objective facts that you should weigh when looking at these problems.”

Ziemiecki also added that she was pleased that her Social Studies teachers, including Lundstedt, were not biased in their teachings. “They are focused very much on fact,” she says. “Very much on the objective issue at hand and not trying to taint their teaching with any of their personal beliefs.”

The NHBA’s Law Related Education department is currently engaging in efforts to increase the WTP program’s outreach with the goal of getting the program into more schools.

“Overall, it’s a really great program,” Lundstedt says. “It gives kids something to be proud of in terms of their high school careers and it’s something they can take with them into college.”