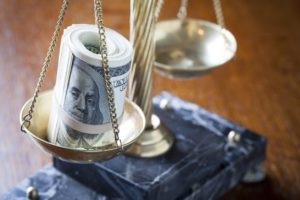 What is the appropriate child support in cases where the parents have equal or approximately equal parenting schedules? Under current law, the answer to this question is not known. RSA 458-C:5 states that there MAY be an adjustment to the Guidelines support, subject to a three-part test. It says nothing about how much the adjusted support should be. In the 15 years since the adoption of the Parental Rights and Responsibilities Act, more families are choosing equal or approximately equal parenting schedules, meaning that more parents are facing this question. As the appropriate support is not predictable, there is more litigation. Legislative efforts to answer this question have failed for many years, but at least three bills on the topic will be considered by the NH Legislature in 2022.

Statutes – Current NH statutes do not explicitly tie child support to the parenting schedule. The Guidelines and USO refer to “obligor” and “obligee,” defined simply as the person paying or receiving support. The Guidelines child support is presumed to be the correct amount. There is no specific formula for child support when each of the parents have the child or children approximately half of the time. Instead, RSA 458-C:5 says that an equal or approximately equal schedule “shall not by itself constitute ground for an adjustment” in the Guidelines. It then gives a three-part test to consider when deciding if the equal time schedule justifies any deviation from the Guidelines: (A) whether the parents agree to an allocation of variable expenses; (B) whether the obligor shows that the parenting schedule reduces the fixed costs of child-rearing for the obligee; and whether the lower-income parent is able to meet the costs of child-rearing in a similar style to the other parent.

“Net the Difference” – In the 1990s, some lawyers and marital masters started using a formula called “net the difference.” I have not been able to document the origin but a report from Cheshire County says that Marital Master Larry Pletcher was an advocate. To “net the difference,” calculate the Guidelines support that parent A would owe parent B, and that B would owe A. Subtract the smaller amount from the larger. The higher-income parent pays the resulting amount to the other parent.

While this is method is simple, simple does not necessarily mean fair. After a review of the results of applying the “net the difference” method to families with various incomes, I concluded that when incomes are substantially different, using it is unfair to children. Specifically, when one parent earns 60% or more of the parents’ combined gross income, lifestyles in the two homes would be dissimilar and thus not in the child’s best interest.

For example, if one parent earns $7,083 monthly ($85K per year) and the other earns $3,333 ($40K per year), the higher-income parent earns 68% of the combined, total monthly gross income.  For one child, the “net the difference” support amount would be $582. If this method is used in this example, after support is paid and received, the higher-income parent would have $6,501 in gross monthly income (62.4% of their combined total). The lower-income parent would have $3,915 (37.6% of the combined total). This is $2,596 more in gross monthly income in one household. (Note that an after-tax analysis would be helpful, but requires filing status, exemption allocation, and other details.)

This larger ratio and the difference in real dollars each month, would create an insurmountable barrier to achieving a relatively similar lifestyle for the children in each home. Note that if Guidelines support was agreed or ordered, the higher-income parent would still have $1,550 more in gross income, but the ratio of the parents’ income would be 57.4% to 42.6%. This is a more equitable difference between parents supporting a child in two separate households.

An additional factor in divorce cases is the alimony formula under the 2018 law. Lowering child support may mean more alimony. These types of payments have different modification standards and termination dates. Consider the outcome for your client.

Case Law – In the 2019 case, IMO Silva & Silva, the Supreme Court analyzed RSA 458-C:5 and concluded that the trial court made insufficient findings to justify a Guidelines deviation. As to each of the three tests, the trial court failed to connect the facts it found to justify support of less than Guidelines. Without explaining how it justified less support, the sharing of certain variable expenses was insufficient. The trial court concluded that mother’s fixed expenses were reduced by father’s paying for a list of expenses that were mostly variable ones. Thus, the Supreme Court found the findings as to test B insufficient. Additionally, as to test C (lifestyle), there were insufficient findings supporting the conclusion that mother could meet child-rearing in a similar style.

Legislation – The 2022 NH legislature will see at least three bills proposing an answer to the question of appropriate child support in equal or approximately equal schedules. One has a presumption that “net the difference” produces the correct support in every equal or approximately equal schedule case. Another revises the test for adjustment, focusing on the child’s interest in a similar lifestyle in both homes, and using “net the difference” only where the parental incomes are similar.  A third is based on HB 161 from the 2021 session and the UNH report tying support adjustments closely to the specific parenting schedule. Stay tuned!

Honey Hastings is an inactive/retired member of the Bar and a practicing Certified Family Mediator. She operates Amoskeag Continuing Education, drafts legislation, and advocates for family law reform.