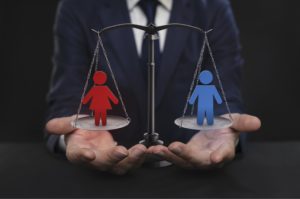 The 2022 Economics of Law Practice Survey of the New Hampshire Bar Association, performed by the University of New Hampshire’s Survey Center, is now complete with a 24 percent response rate. The survey was last conducted in 2015. A supplement providing key takeaways is included inside this issue of the Bar News. With the inclusion of new gender-related statistics, I took the opportunity to revisit the topic of gender equality previously discussed in my March 2022 article.

According to the survey, “there has been a dramatic increase in the percentage of women in the practice, especially among younger attorneys,” concluding that overall, 40 percent of NHBA members are women. This shows a seven percent increase from the 2015 survey. Delving further, of the respondents under 30 years old, 61 percent are women, and approximately half of the respondents between the ages of 30 and 49 are women. From there, as the ages increase, so do the percentages. Looking at just the statistics of women under 50, though, it’s a safe assumption that the younger generation is evening things out.

Lindsey Courtney, president of the New Hampshire Women’s Bar Association, said the numbers don’t surprise her and she believes the profession is headed in the right direction.

“It’s starting to be more representative of the community in general,” she says. “I went to law school approximately 15 years ago, and even at that time we saw women had a slight edge in terms of numbers over men, as it relates to student applications. I don’t think gender bias is as widespread as represented by the fact that more women are entering the legal profession.”

The new survey also finds that a significant pay gap in gross income persists in the legal profession, with men earning 44 percent more than women overall. However, like the percentages of female bar members, the pay gap considerably narrows with the younger generation. Among the respondents from the ages of 24 to 40, women earn 16 percent less and from ages 41 to 50 women earn 22 percent less. The gap is most pronounced among those between 51 and 60 years of age, being at 58 percent.

According to the survey, the statistics may be influenced by societal factors rather than management bias. There are several well-known theories behind gender pay gaps, such as men gravitating toward higher-risk-versus-reward contingency cases, while many women drift to more steady, guaranteed income with family and estate law.

“There are quite a few females who do personal injury work, but it is a male-dominated area,” Chair of the NHBA Gender Equality Committee Lyndsay Robinson says. “I don’t think women are afraid to practice in those areas of law, it’s just not a guarantee. Women probably feel a need to provide and so by practicing in an area of law where there is persistent, steady income instead of waiting for a settlement or a judgment to come down on those types of cases could be part of the reason why women may be less likely to practice in those areas of law.”

Another theory behind gender pay gaps is that while the playing field is currently changing with men taking parental leave, historically women were the caregivers who needed time off or reduced hours to take care of children.

“I think what we see as women enter the profession, the historical way that we practice law in terms of the rigid hours, may not necessarily be conducive to family life,” Courtney says, although she does feel that things are improving. “I feel very encouraged by the direction the legal profession is going in, though. [When I had children] it was amazing the difference in the amount of encouragement I received. For my first two children, I didn’t receive paid parental leave but fast forward to my youngest, I did.”

Both Lyndsay Robinson and Lindsey Courtney agree that one of the positive impacts of the COVID-19 pandemic was that some firms made dramatic shifts in their business models.

“Flexible scheduling is very important to people, whether you have family commitments or other commitments, work-life balance is really important,” Courtney says. “I think people need to rethink the old model of doing business, like billable hours. I don’t know the answer, but I think that’s something the legal profession should be looking at. Is there another way to capture the business as opposed to just six-minute increments? That’s just not attractive to people who are dealing with other commitments. We have to learn how to pivot to be more attractive as a profession. The numbers of people entering law school are not going up. We have to ask ourselves why that is.”

Another plausible theory of gender pay gaps is that many women may not advocate for themselves during their initial interviews as much as men do.

“Women may not necessarily feel comfortable advocating in every situation,” Robinson says. “As a society, some women may believe they are being perceived as being too greedy if they are asking for more [in an interview]. I think there’s a concern that if they know they want to have a family someday, they just accept what is offered to not look greedy. Some women end up taking a pay cut because they will go part-time after they have children.”

Robinson encourages both men and women to attend the Gender Equality Committee’s annual negotiations workshop to help them better advocate for themselves in interviews.

With the gap noticeably narrowing in the younger generation, both Robinson and Courtney are optimistic that things are improving each year.

“I think we are headed in the right direction,” Courtney says. “More change needs to occur, but I think we’ll see that in time. Employers are starting to be flexible and that could very much impact where women find themselves in 10 years.”

If the trend of narrowing the gender gap continues, then by the time the younger generation retires it may even close. And as far as women being treated differently, conversations with younger attorneys and judges who haven’t endured the days where women weren’t allowed to wear pants in court illustrates a significant improvement.

Circuit Court Judge Sandra Cabrera, who was confirmed in July 2022, says that she has had a very fortunate experience in her career.

“Maybe I am an example of progress being made,” she says. “I haven’t experienced the same stories that were expressed in [the March 2022] article. My experience has been a positive one because I’ve had good mentors and good leaders to look up to in both the bar and the judiciary. Now, there aren’t as many women with young children who have had those experiences. You’re seeing more and more women coming into the bar and having children and staying in. And that wasn’t always the story.”

Cabrera continues by saying, “I think it’s really important to continue encouraging and supporting more women seeking positions of leadership, in the bar, within law firms, the judiciary, and in other areas. I think that’s key to addressing any outstanding issues there are.”

For an overview of the 2022 Economics of Law Practice Survey, see the takeaways provided in the Bar News supplement included in this issue. For the entire report, visit nhbar.org/econlaw-survey-results.