Home“I Could Be a Lawyer” – Attorney Susanne...

When Susanne Gilliam started law school – at age 55 – she had no idea the move would lead her to a detention center in El Paso, Texas, or a street plaza ringed with armed security forces in Tijuana, Mexico. But Gilliam, an active member of the New Hampshire Bar’s New Lawyers Committee, and a recent graduate of its Leadership Academy, is no stranger to taking on a challenge.

Now a full-time immigration lawyer with a focus on asylum cases, Gilliam grew up in California and developed arthritis at the age of 12, limiting her mobility. “I needed to do things differently,” she says.

At the University of California, Irvine, she majored in computer science and went on to spend two-plus decades as a programmer because, “I could earn really good money, and I could do it sitting down,” Gilliam says with a laugh. 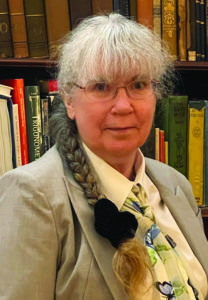 She and her husband, Clint, decided they didn’t want to raise children in crowded California, so they moved to Philadelphia for 20 years before settling in New England, where she had family roots.

However, working full-time cut into time with her husband and three kids, so Gilliam finally quit her job to homeschool the children. Some 10 years later, she decided to return to the workforce – with rusty computer skills and an outdated resumé – determined that a new career was in order.

“’I could be a lawyer’ stuck with me in that nagging way,” she remembers thinking.

She was accepted at New England Law in Boston, where she was the oldest in her class by 18 years. Her younger peers were resolutely polite, she says, but when she mentioned once that she was preparing for her daughter’s birthday party and a fellow student asked how old her daughter was, “I told him, and he went absolutely white and said, ‘that’s how old I am.’” She also recalls telling her children, half-joking, “there will be no dating of my classmates while I’m still in school.”

While at New England Law, she had four internships, in areas ranging from land use to patent law, “but my favorite internship was when I worked as a mediator at the EEOC (Equal Employment Opportunity Commission) and I absolutely loved that, to give people the chance in a less formal setting to help them distill what it is they want and need the most.” The experience left her with a continuing interest in alternative dispute resolution, which she sometimes incorporates into her later practice.

After her 2015 graduation, with no interest in courtroom appearances, but an abiding desire for face-to-face work with clients, she founded Gilliam Law LLC, intending to focus on elder law. She had been helping her mother and aunt through their downsizing, and thought being older herself might be an advantage working with elderly clients.

Then, in 2018, she read about the Trump administration’s policy, intended to curb illegal immigration, of separating asylum-seeking parents and their children at the border. “I just didn’t feel I could sit on the sidelines,” she says.

She volunteered with the Immigration Justice Campaign, and soon found herself at a detention center in El Paso, Texas, working with volunteer interpreters to interview parents who had been separated from their children.

One Guatemalan woman had been there two months without speaking to anyone because no one could figure out which indigenous Guatemalan language she spoke, Gilliam adds, “and the heartbreaking thing is, her child was out there somewhere.”

Gilliam worked 20 hours a day, posted her impressions on Facebook, slept four hours and started over again. “When I flew home, I was so very changed by the experience, but I was also positively exhausted,” she recalls.

But her work had attracted notice. No sooner was she back in Boston than she found out the American Civil Liberties Union had filed suit against the US Immigration and Customs Enforcement in the US District Court for the Southern District of California, seeking a stay of removal for recently reunited families. The case, which addressed the confusion of parents who signed “reunification” forms under coercion or without sufficient translation, included a declaration from Gilliam about her interview experience in El Paso and the “pressure tactics” she saw used on parents to sign documents they did not understand.

Still, “I came away thinking ‘I’m only half-done with this job,’” Gilliam says. “I need to speak about what I’ve seen, the ‘bear witness’ mentality… If you’re the one who has the privilege of witnessing history up close, it doesn’t matter if you write about it or speak about it or do art about it, I didn’t really feel it was an option not to.”

So, she did a second volunteer stint, this time traveling to Tijuana in February 2019, to join other pro bono workers in preparing people for what they would face with customs and border patrol agents when they crossed the border.

“They overly air-condition their facilities,” she says of the border agents. “They want to make the experience as uncomfortable and unpleasant as possible so you won’t cross the border again. They would make you take off every layer of clothing except the one that was touching your skin.”

People hoping to cross the border would gather daily on a plaza which was surrounded on three sides by Mexican National Guard members and on the fourth by Mexican police. Gang members sometimes came to the plaza looking for people who had crossed them and, if you happened to get between them and their target, “you could be collateral damage,” Gilliam says.

It rained most of the time she was there. The weather turned cold, and Gilliam ended up with bronchitis, pneumonia, and a foot infection.

She also picked up her first three asylum cases, two of which remain active. Her third client was granted asylum.

Since then, Gilliam has developed ties with other immigration lawyers, in part through her participation in the Bar’s Leadership Academy, from which she recently graduated. “You do form bonds with other members of your academy class,” she notes.

Though she lives in Sudbury, MA, Gilliam is more active in NH Bar activities than those in her resident state, finding the NH Bar smaller and more congenial. “There was a lot of encouragement for people to sign up for (Bar) committees, and I got to the New Lawyers Committee and said, ‘I can relate to that’ and then it was like a stepping stone,” she adds.

Laurie Young, co-chair of the New Lawyers Committee, says Gilliam “has tremendous passion for making the Bar better and more accessible, not just as an access to justice issue, but as to new lawyer and solo practice issues… She brings that wealth of experience to her practice and her professionalism, but also shows that being a new lawyer shouldn’t be about age.”

The committee’s other co-chair, Stephanie Tymula, seconds that, adding, “Susanne is absolutely wonderful and brings a lot to the NLC.”

Gilliam is also the New Hampshire Bar’s delegate to the American Bar Association’s Young Lawyers Division and has been active in the New England chapter of the American Immigration Lawyers Association.

Longtime friend Laura Keeler, who met Gilliam when at a Practical Skills Workshop while Keeler was working for the NHBA, calls her “brilliant, curious, eager to help others, a loyal volunteer, and an active member of the Bar.”

“I am happy to see her rise with her positions as ABA Delegate and in the Leadership Academy Program, where she brings an important voice and perspective,” Keeler adds. “One of her many assets is that she helps people recognize the expanded definition of a new lawyer; some people go from college directly to law school, some have years of experience in between, and some like Susanne, have whole careers in other fields before joining the law.”

Gilliam continues to speak for free to any group wishing to hear about her work on the border, but also discusses mental health, the importance of treatment, and her own struggles with PTSD after her work there. “It mostly manifests as nightmares, but you never know when something’s going to trigger it,” she says, adding she had to leave a movie theater in the middle of the latest James Bond movie because a prison scene reminded her of the detention center. “And I can’t cross open plazas anymore,” she adds.

When not working, Gilliam enjoys piano lessons, gardening, sewing, and weekly Zoom meetings with a 12-year-old South Korean girl she met through Eldera, an organization that matches people over 60 with young people from around the world.

She offers her immigration legal services on a pro bono basis, saying her husband’s salary is adequate for their needs. She says she looks forward to continuing work with asylum-seekers.

“I’m not going to be the one who could have done something and didn’t,” she says.