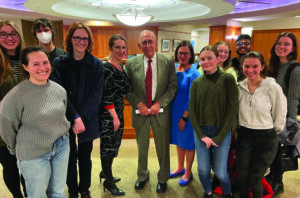 When prominent New Hampshire lawyer, Jack Middleton, celebrated his 93rd birthday in January of this year, he had no idea he would be going back to law school in November.

Aiming to uncover the differences in modern-day law school and see how they have changed the face of lawyering, the New Hampshire Bar Association decided to send a long-time practicing lawyer back to law school for a day. Having more than 61 years of experience as a trail lawyer and 24 years of service as a NH District Court judge, Middleton was at the top of the list of potential candidates.

A partner at McLane Middleton, the state’s largest law firm, Middleton is a former NHBA president, one of the founders of the New Hampshire Bar Foundation, and he helped form the IOLTA program in 1982.

In 1999, after having quadruple bypass surgery, he returned to work after just one month – so he knew going back to law school would be a cakewalk.

“I think it will be fun,” Middleton agreed. He originally received his JD from Boston University of Law, but UNH Franklin Pierce School of Law (UNH Law) was more than happy to take him on as a student for the day.

“Throughout my career, it has been really important to me to make sure that we are training lawyers to not just think like lawyers – which is incredibly crucial – but also to teach students to hit the ground running in the field of practice,” UNH Law Dean Megan Carpenter says. “When we were approached about having a lawyer in the community go back to school, I wondered what the educational experience would be like for someone to sit in our classes and more or less reflect the experience of law practice, or whether it would be reflective of the experience they had in law school.”

Dean Carpenter continues, “When I learned that the attorney coming back to school was Jack Middleton, I could not believe it, because he is a giant in the New Hampshire legal community and has been such an important part of the development of legal services across the state for so long. It’s a true honor to welcome him to the school.”

As Middleton strides through the doorway of UNH Law and into the lobby, he comments on how bright and cheerful the school looks.

“Where I went to law school, it was an old building that was dark and dreary,” Middleton says. “They’ve done a really good job with their school – it would be a nice place to go.”

Sitting in the lobby, he ruminates what the day has in store.

“I haven’t been in a class for many years,” Middleton ponders. “I suspect every student has their little computer that they carry around with them, banging out their notes. It’s a little different than scribbling notes with a pen.” 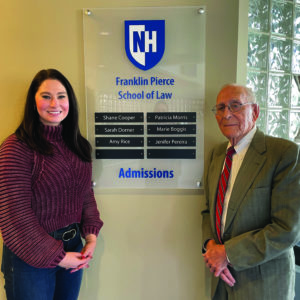 Middleton at admissions with 3L student, Sarah Deitlehoff, during his tour of the school. Photo by Tom Jarvis

Sarah Deitlehoff, a 3L student at UNH Law, greets Middleton in the lobby and proceeds to give him a tour of the campus.

“I was on the board here for eight years until the merger [Franklin Pierce Law Center and UNH in 2010] occurred,” Middleton tells Deitlehoff as they walk through the halls. “So, I’m fairly familiar with this school. I’ve spent a lot of time here.”

Passing by the campus courtroom, Middleton pauses. Modeled after the NH Supreme Court, the room was built in 2009 as a resource for students to practice oral argument skills and trial advocacy.

“They didn’t have one of these available when I was in law school,” he says. “It’s very well done. It’s better than a lot of the state courtrooms.”

Middleton decides to have a little fun as Deitlehoff shows him the admissions office. He pokes his head in and tells the admissions assistant, “I’ve been a little slow getting to law school. Maybe I’ll learn something, though.”

Following the tour, Middleton has lunch with Dean Carpenter and two assistant deans, before heading to class.

“I graduated law school in 1956 – a little while ago,” Middleton says to Dean Carpenter at lunch. “I’m going to a class on torts. That will be interesting; it’s a subject that I may know a little about.”

Before class begins, Professor Sophie Sparrow asks him if he would like to participate in the class or to be called on. He tells her no and that he does not want to sit in the front. As the students pour into their seats, Middleton sits between a pair of Claires, Claire Bueche and Claire Markey, 1L students assigned to acclimate him.

“I didn’t know what to expect,” Markey says. She is currently deciding between national security and health law. “I was a little intimidated at first, but once I got to know him, he was a super nice guy. As I explained about internet pages like Moodle and Canvas, where we have our syllabus and assignments, he was very intrigued that we had everything pretty much at our fingertips.”

As Sparrow lectures on sovereign immunity, the Federal Tort Claims Act, the discretionary function exception, and compensatory damages, Middleton follows along with Markey on her laptop.

“It was really funny because he would lean over and say, ‘that’s a really thin case,’ or ‘the attorney who takes that on has a lot of work ahead of them,’” Markey says. “It was interesting to hear his point of view on the cases from his experience, whereas I’m reading them and thinking it’s just a case that I’m learning from. Totally different perspective.”

After the class, Professor Sparrow, who was voted 2018 Teacher of the Year, talks about the experience.

“I have been in New Hampshire for 37 years, and I knew of Jack as this incredibly knowledgeable, competent, well-respected attorney, and honestly, I was terrified,” Sparrow confesses. “I was completely intimidated. This man has 61 years of practice – and practices in the area that I’m teaching – what if I got something wrong?”

Sparrow need not worry, though. Middleton complimented her teaching style and said he thoroughly enjoyed himself. 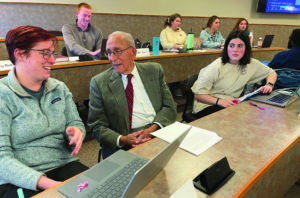 Middleton in class between a pair of Claires, Claire Markey (left) and Claire Bueche (right), following along on Markey’s laptop. Photo by Tom Jarvis

“The professor was very well organized and very animated,” Middleton says. “The discussion, I would say, was very lively. She called on the students and they participated – I thought it was an excellent class.”

Middleton continues, “The students were also very helpful. They each have a computer and they can follow the thread of the lecture. The professor was talking about particular matters that came out of cases and the students had the cases on their computers. I saw some textbooks, but they seemed to have everything they needed on their computers. A little different, to say the least.”

Sixty-six years after obtaining his JD, Middleton’s return to law school left him in high spirits. When asked of the fundamental differences between law school then versus now, he said modern law students come away much better prepared.

“When I went to law school, it was purely coursework. The approach today is much more clinical. All we learned was theory,” Middleton says. “They [UNH Law] have a summer program, in addition to the clinical programs, which we didn’t have. I didn’t know what a sheriff was or how to get a hold of them when I first started. [Students] get a lot better prepared for real-life situations than we did. It’s a good opportunity for young people to learn something about how the system really works.”

Middleton also remarks how different the classrooms are set up and how class is conducted.

“We didn’t have classrooms like the one I was in today,” Middleton says. “This one has steps, so the farther back you go, you can still see the professor. And she utilizes a large screen and a computer. We took notes with a pen while the professors were lecturing, and they had a blackboard.”

“Our accreditors, the American Bar Association, now require experiential learning,” Sparrow says. “So, everyone has to have six credits of either simulations, like a trial practice class or negotiations, or they have to do a clinic or an internship.”

When asked if he would ever do this again, a huge grin spreads across Middleton’s face and his eyes light up, suggesting for a fleeting moment the precocious young law student he was in the mid-1950s.

“Sure,” he chuckles. “It was an enjoyable time.”