When Lyndeborough attorney Joseph Caulfield takes on a case, he approaches it with the skills of a martial artist, and with a sprinkling of magic. 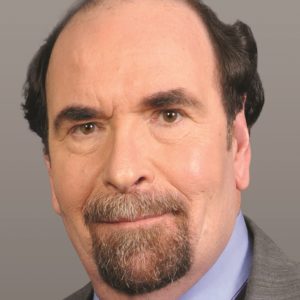 Caulfield is the founder and chief in­structor of Black Sword Aikido, a martial arts discipline that recommends “when force is presented against you, any aggres­sive action, you don’t butt heads against it, you join with it and lead it to a position of harmony,” he says. “That really infuses my practice of law.”

He sees that approach as particularly valuable in family law, which consti­tutes about 80 per­cent of his practice. Criminal cases make up most of the remainder.

“I try to do as little harm in the world as possible, and I think the way to resolve a situa­tion, especially a family law situation, is through discussion, negotiation–each per­son having the opportunity to present their needs and try to resolve them,” he says. “Litigation is a horrible way to resolve anything; though it’s necessary if media­tion fails.”

A certified guardian ad litem and cer­tified family mediator, Caulfield is presi­dent of the New Hampshire Guardian Ad Litem Association and a founding member of the Academy of Professional Family Mediators.

He is also president of the Granite State Magicians and a member of the In­ternational Brotherhood of Magicians and performs at a variety of fundraisers and other events throughout the state.

That avocation, too, complements his legal work, Caulfield says.

“Anytime I’m in court is basically a performance,” he says. “The same stage presence, those are all things you use in the courtroom. I’m not minimizing the in­tellectual part of the law, but an awful lot is showmanship and stagecraft. There’s something more to being a lawyer than just knowing the law.”

A native of Norwood, Massachusetts, Caulfield was born to lawyer parents. His father was a Boston trial lawyer and one-time acting dean of Suffolk Law School, and his mother was what he calls a “Renais­sance woman,” who started as a legal sec­retary before volunteering in World War II, getting her bachelor’s and master’s degrees and then going on to Suffolk Law School.

They discouraged him from becom­ing a lawyer, thinking “the time for lawyers was gone from this world,” Caulfield says; they suggested that he become a doctor instead. He entered a pre-med program at Boston College, but during his sec­ond year saw his fa­ther try a court case. “It enthralled me,” he remembers. He switched majors.

Caulfield then accepted an offer to be­come a partner at a New Hampshire law firm and worked at a few others before start­ing his own firm in 1982.

Attorney Brian Snow met Caulfield when both were practicing in Nashua Dis­trict Court as young lawyers; the two have remained close since then. “He was a tough adversary at the time, and out of such adver­sity comes friendship,” Snow recalls. “He is an extremely talented lawyer, sometimes stri­dent but very talented. He is also a marvelous magician and a martial artist, as well.”

The attraction to martial arts came early. Caulfield studied karate as a boy, then moved on to Aikido “to keep myself sane” in college. He later learned other mar­tial arts forms before starting Black Sword Aikido. 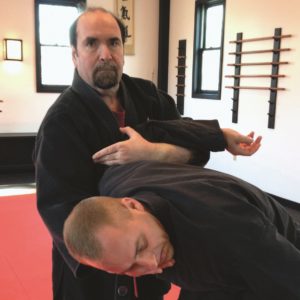 “I think the martial artists who know how to de­fend themselves are the most peaceful people, because they don’t have to prove anything,” he says. “To me, it’s not just fighting: it’s doing the perfect tech­nique.”

Jon Beyer has been a martial arts student of Caul­field’s for some 29 years. He believes in the approach where “what you try to do is remain calm and redirect, so you both get to a point of mutual respect, and it’s not con­flict meeting conflict.”

“The reason I kept studying with [Caul­field] is, I thought he was one of the best martial artists I’ve seen, technically more advanced,” he adds. “I think he honestly cares about people; I really do. He cares about the common good.”

Caulfield’s interest in magic predates even his martial arts history. His grandfa­ther, born in Ireland, was also a magician, and “he used to utterly amaze me as a kid doing magic tricks,” he says. One such trick involved taking Caulfield’s mother’s mink stole, repeating magic words over it, then “bringing it to life” so it would crawl across the floor and up the wall before settling to stillness again. (Only later did Caulfield learn his grandfather had taken thread from a sewing basket and roped it through the room to pull the stole along.)

Caulfield joined a Boston magic club as a boy and is now a member of the Interna­tional Brotherhood of Magicians, Order of Merlin Excelsior, Society of American Ma­gicians, and other magician associations.

He has graduated from what he calls “mainstream magic” (“where the magician approaches the audience and basically says ‘see how clever I am’”) to a style of magic called “mystery performing.” “It’s me and the audience revealing mysteries together,” he says. “[W]hen my audience leaves, I want them to have a moment of transcen­dence, and for one brief moment say, ‘may­be there is magic in the world.’” 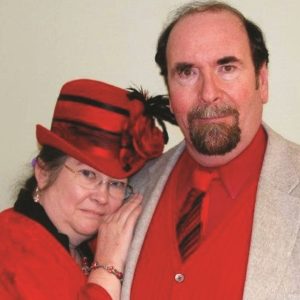 Fellow magician Robert Granville has performed with Caulfield many times over the 10-plus years of their acquaintance and shares his philosophy on mystery entertain­ment. “Rather than seeking to amaze an au­dience with feats of the impossible, mystery entertainers prefer to create an atmosphere that takes the audience slightly out of its comfort zone to a place where bizarre and mysterious things can happen.”

Granville adds that Caulfield has been president of the Granite State Magic and Mystery Entertainers for several years. “Under his leadership, our club has per­formed numerous shows over the years, both as charitable donations where we take no fees, such as fundraisers for a local po­lice department to fund its K-9 program and institutions that shelter at-risk children, as well as shows open to the public where the proceeds are used to cover the expenses of the club.”

Caulfield has tried more than 1,000 cases in the last 43 years, obtaining settle­ments in cases involving everything from exploding propane tanks and wrongful deaths to multi-vehicle collisions. But those are not the ones that stand out in his mind.

“If I try a murder case or a rape case, it’s over with, and I go on with my life. But the cases that linger for me are these cases where I‘m a guardian ad litem,” he says. “Years later, I lie awake at night wondering if I made the right decision. Those are the cases that linger and bother me.”

So, it is especially gratifying to him when a parent contacts him years later to thank him for his handling of a case or when someone calls to say, “you were my guard­ian ad litem, and now I’m in college.”